Destruction and desperation are among the stirring sights captured in photos from Australia where one of the worst bushfire seasons on record continues to ravage wide swaths of the continent, taking homes, buildings and dozens of human lives with …

Destruction and desperation are among the stirring sights captured in photos from Australia where one of the worst bushfire seasons on record continues to ravage wide swaths of the continent, taking homes, buildings and dozens of human lives with it.

The bushfires, fuelled by drought and record high temperatures have resulted in more than 2,000 homes destroyed and 26 people killed. The number of animals killed is estimated as more than one billion.

Here are a few images capturing the ongoing struggle and rescue efforts. 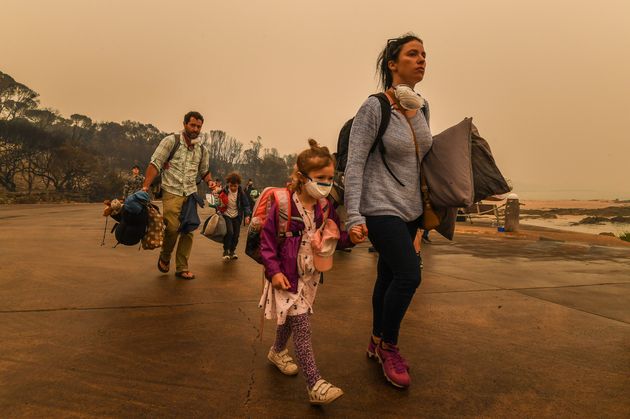 People stranded in the town of Mallacoota in the state of Victoria are evacuated by Army personnel to a ship after fires ravaged the area. 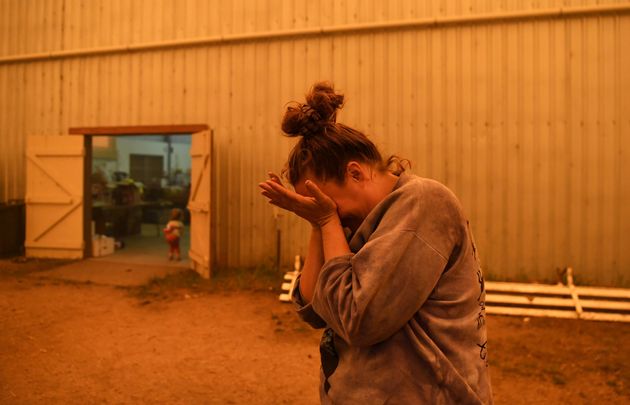 Jesse Collins, an organiser of donations for those afflicted by the fires, breaks down while discussing the relief efforts at an evacuation center in Cobargo in the state of New South Wales. 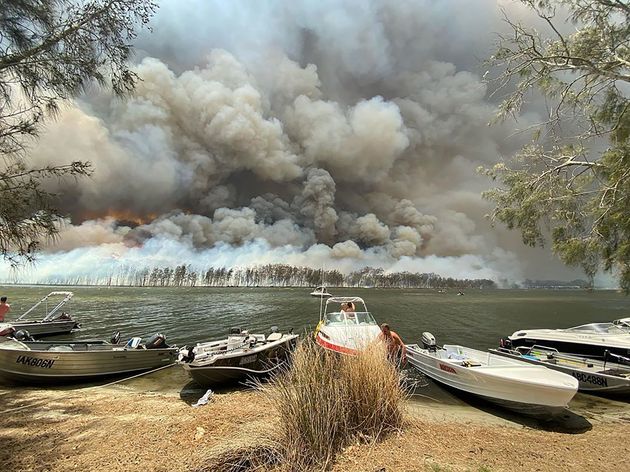 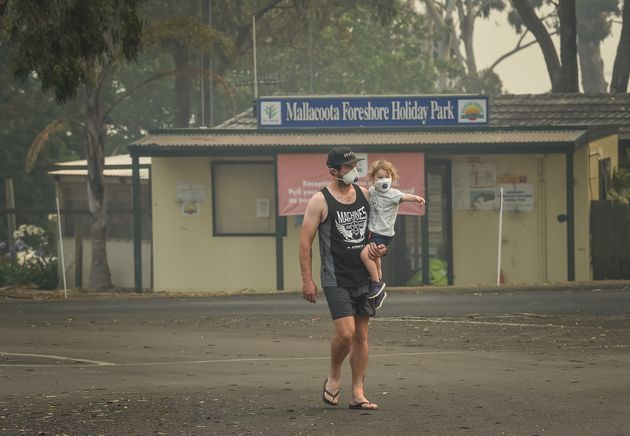 A scene from a tourist spot in Mallacoota. 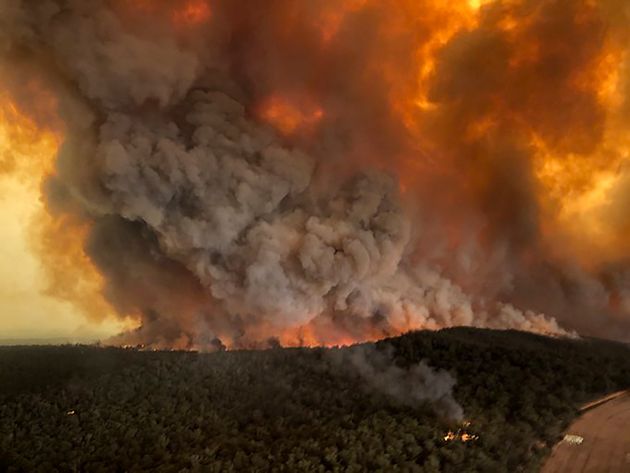 Wildfires rage under plumes of smoke in Bairnsdale in Victoria. 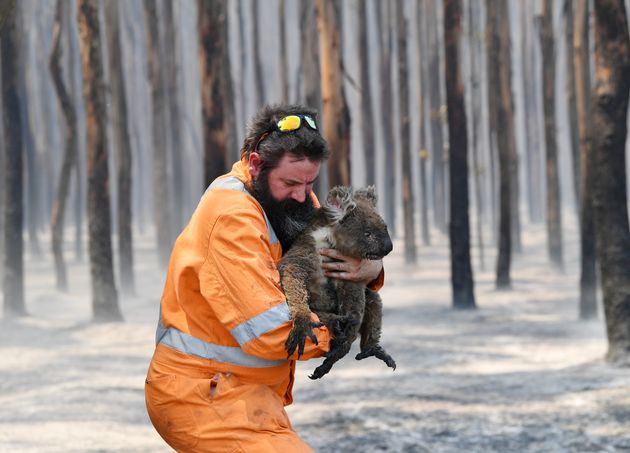 Wildlife rescuer Simon Adamczyk carries a koala on Kangaroo Island in the state of South Australia. 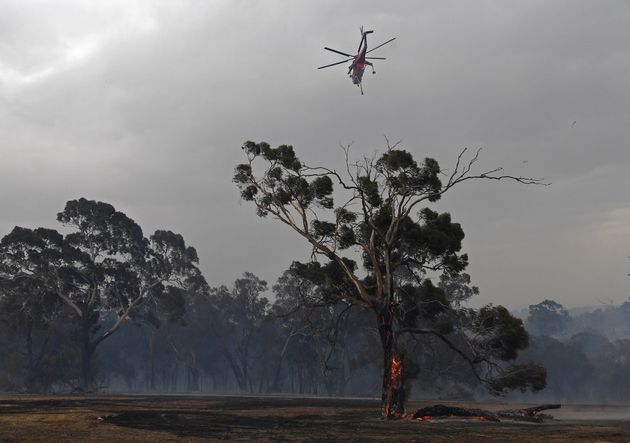 A helicopter flies over a burning tree in Bundoora, a suburb of Melbourne. 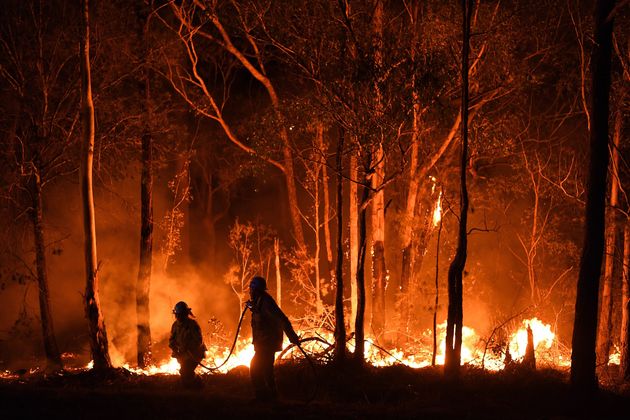 Firefighters worked through the night to prevent a flare-up from crossing the Kings Highway in between Nelligen and Batemans Bay in New South Wales. 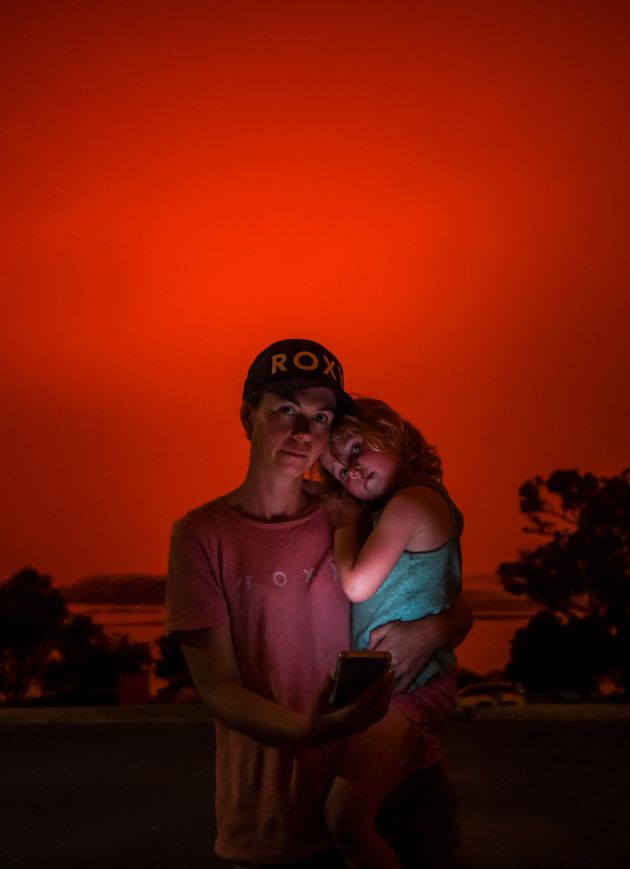 Josie Kerr holds her daughter, Ellie, against the backdrop of a blood-red sky in Mallacoota late last week. 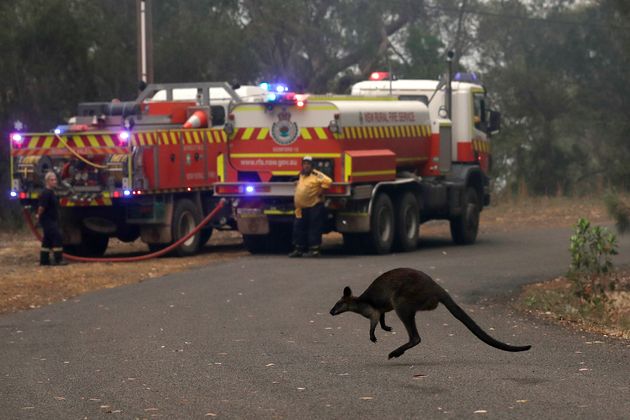 A wallaby hops across a road to flee a fire near Mangrove Mountain, north of Sydney, in early December. Hot, dry conditions brought an early start to Australia’s fire season. 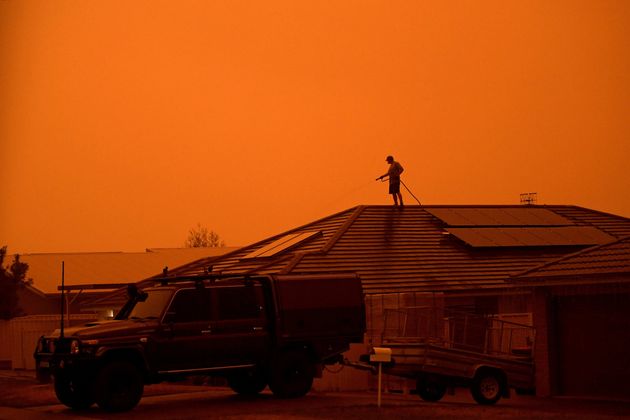 A resident used a garden hose to wet down his house as high winds pushed smoke and ash from a fire toward Nowra in New South Wales late last week. 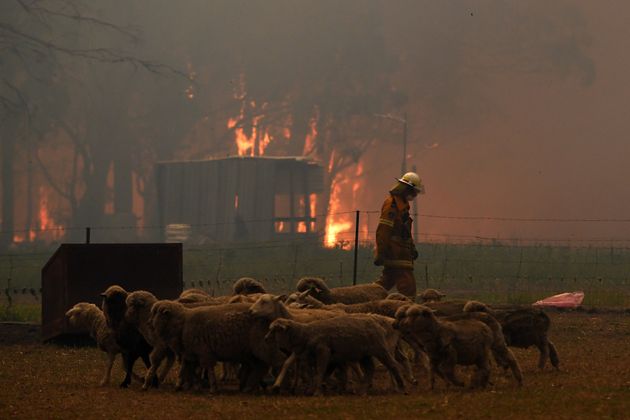 A scene from a fire near the town of Tahmoor, which is southwest of Sydney, in mid-December. 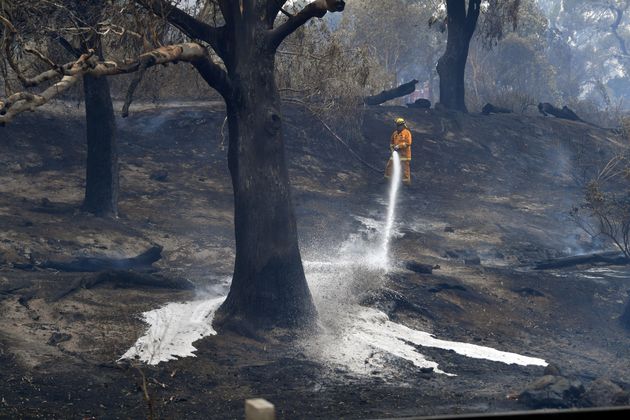 A firefighter sprays water after a fire raged through Bundoora in late December. 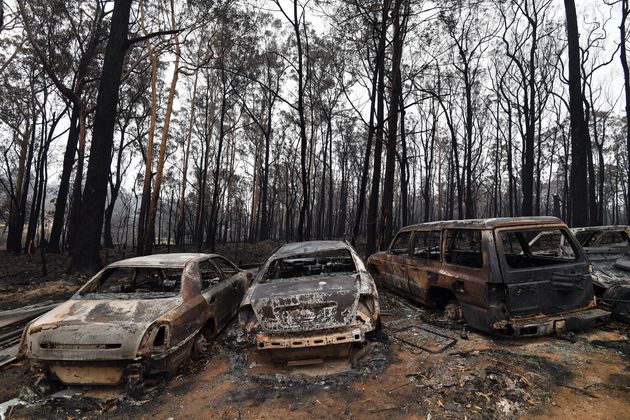 A photo taken Monday shows charred vehicles gutted by bushfires in Mogo Village in New South Wales. Officials say the cost of damages caused by extended fire crisis has risen to almost half a billion dollars. 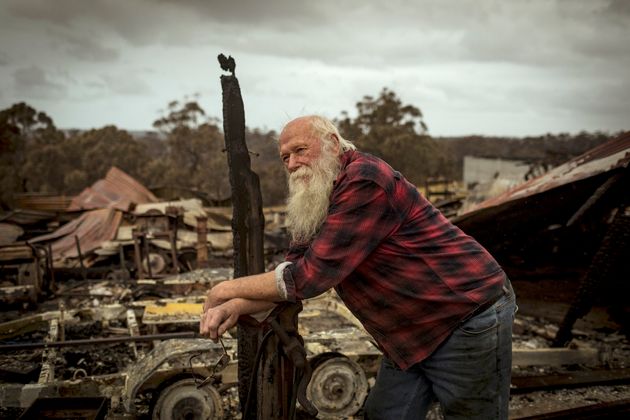 Fire ripped through the valley near a farming hamlet in the East Gippsland region of Victoria. Brian Blakeman stayed, and with his wife saved their house. The surrounding buildings were destroyed. 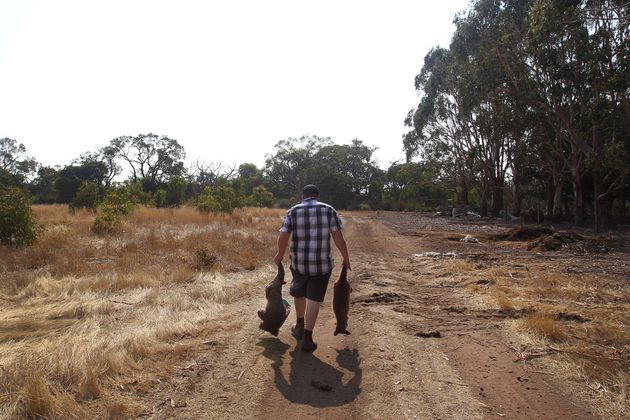 Sam Mitchell, owner of the Kangaroo Island Wildlife Park, carries a dead koala and kangaroo to a mass grave site on Wednesday. The park has been treating and housing close to 30 koalas a day. A catastrophic bushfire over the weekend killed two people in the area. 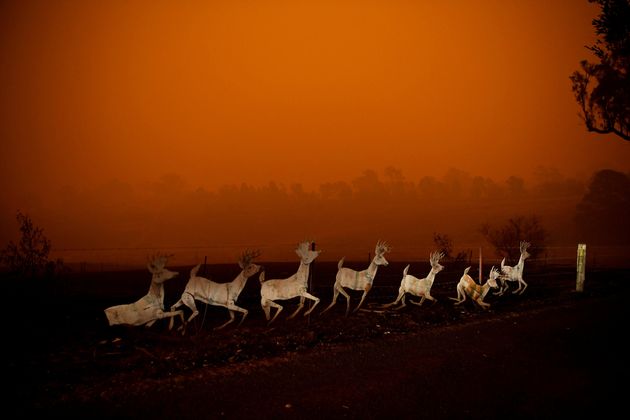 Christmas decorations remained arrayed near a destroyed house in Cobargo on Sunday. 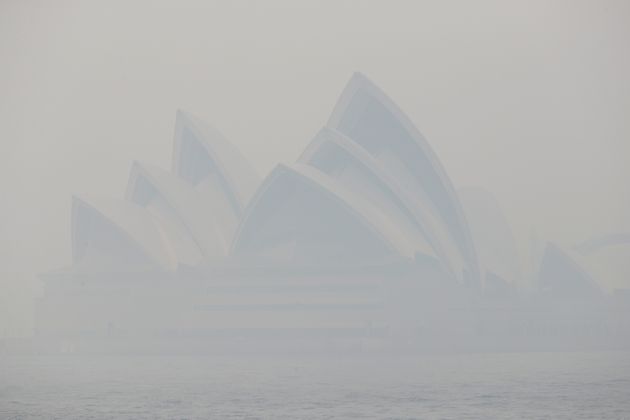 Thick smoke from wildfires shrouded the iconic Opera House in Sydney in early December as Australia first grappled with its environmental crisis. 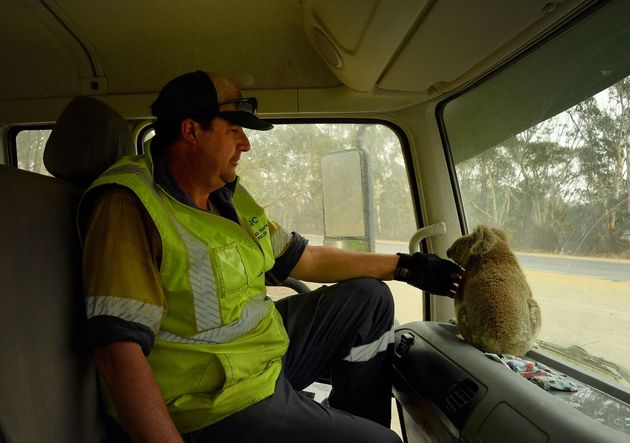 A koala that Damian Campbell-Davys named “Tinny Arse” sits in his water tanker after he resued the animal. Campbell-Davys is among those who have been supplying water firefighters in the Southern Tablelands region of New South Wales. 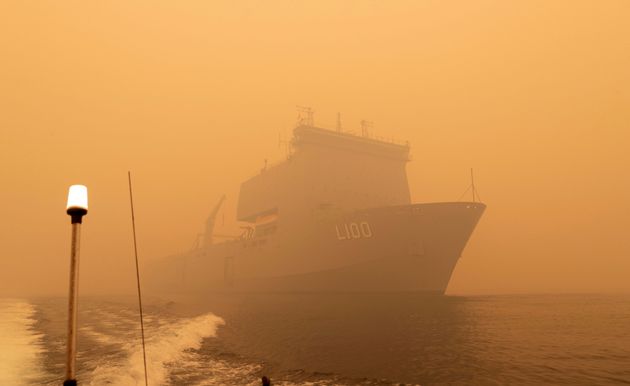 Hazy conditions partially obscure the view of a rescue ship off the coast of Victoria last week. 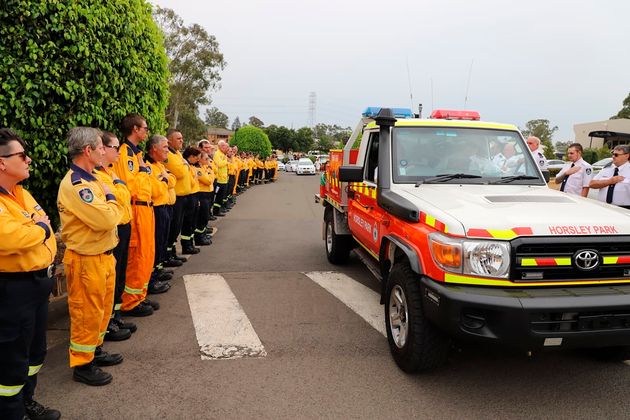 Firefighters pay their respects as the casket of Andrew O’Dwyer arrives for his funeral service at a Catholic church in Sydney on Tuesday. O’Dwyer and colleague Geoffrey Keaton were killed six days before Christmas when a tree fell in the path of their truck as the Green Wattle Creek fire burned in New South Wales, causing the vehicle to roll.