Hundreds of buses stretched over miles of winding road were ferrying thousands of worshipers off Mount Meron in northern Israel on Friday after 45 people were killed and some 150 others injured in a crush at a mass Jewish gathering overnight.

Australian Prime Minister Scott Morrison sent his condolences on behalf of the nation to those impacted by the disaster.

"I send Australia's heartfelt condolences to our friends in Israel following the tragic loss of life at Mount Meron in northern Israel, with many more injured," the PM tweeted. "You are in our thoughts as you grieve at this terrible time."

Queen Elizabeth also sent a message of condolence to the President of Israel.

Kalanit Taub, a first responder, described a "horrific scene" with "nonstop people to care for."

"I saw 20 plus CPRs ongoing at the same time," Taub told CNN. "Anywhere you looked, you saw another person doing CPR."

In the hours afterward, she said she saw people crying or staring into space, struggling to process what they had seen. 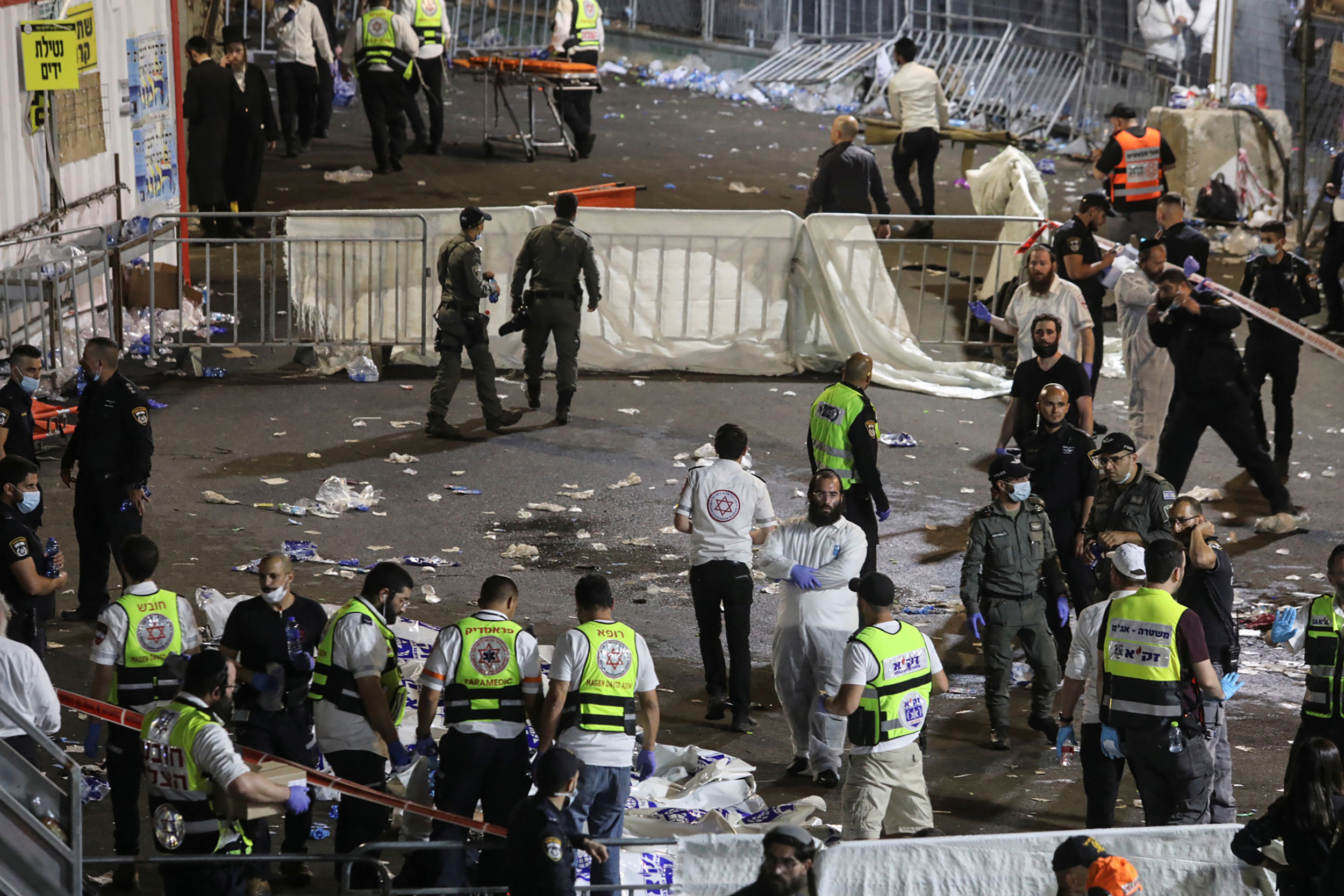 Israeli investigators are examining exactly how the crush happened at the mountain, where worshipers marked the Lag B'Omer holiday, an annual event where participants sing, dance and light fires in homage to second-century sage Rabbi Shimon Bar Yochai at his burial site.

Israel's health ministry had urged people not to attend the festival, warning of the risk of another coronavirus outbreak. However, case numbers have been low, and Israel has already fully vaccinated more than 58 per cent of its population, so the event was allowed to proceed.

Dov Maisel, vice president of operations of the volunteer-based emergency organisation United Hatzalah, told CNN that around 100,000 people were in attendance, though such numbers aren't unusual for the annual festival. Maisel said up to 400,000 people had attended in past years.

Hundreds of people were pouring into the site at the same time from different directions, leading to a "massive amount of congestion," he said. People tightly packed in a small area had fallen down a staircase and crushed each other, he added.

"Overall they usually control the crowd, but at a certain point at the peak the crowd became too tight," Maisel said. "It was simply tragic and horrific." 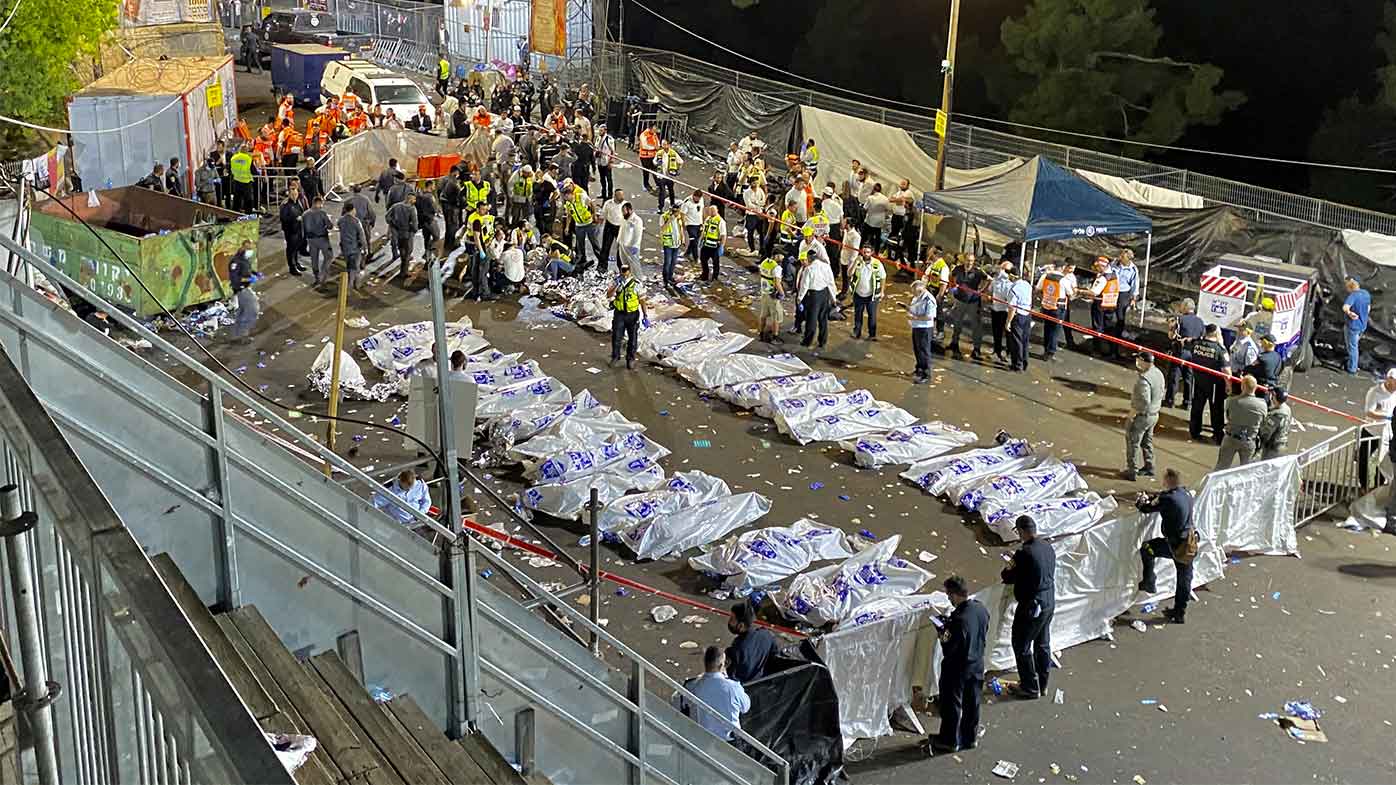 Social media video from the site show men and boys crammed into a narrow passageway, which may be the stairway that Maisel refers to, when it suddenly becomes clear that many are struggling to continue walking, being thrown back and forth in waves of the commotion.

Wice Israel, a participant, described to Reuters how there was "no place to move, and people started to fall to the ground, a lot fell to the ground."

Shlomo Katz, another worshiper, told the news agency: "We were going to go inside for the dancing and stuff and all of a sudden we saw paramedics from MADA ... running by, like mid-CPR on kids, and then one after the other started coming out of ambulance, and then we understood something's going on here," he said.

Footage from the scene showed dozens of body bags lined up on the ground, and personal items like abandoned shoes and crushed eyeglasses lying scattered on the ground at the scene. Dozens of ambulances parked in rows, their lights flashing, were on standby to receive the many injured. Authorities said 250 ambulances had been made available to respond. Six helicopters transferred some of the wounded to hospital. Paramedics were seen running all over the area, with stretchers carrying people in need of treatment.

"I take overall responsibility, for good and for bad. I am ready for every eventuality," said Shimon Lavie, Israel Police's northern commander. He said Israel's northern police command had prioritised security and public safety, but he could not explain what caused the stampede.

Lavie commended police officers who tried to help victims before patients were ferried to hospitals in ambulances and by helicopter. "Police were saving people's lives while they were also dealing with this complicated incident," he said.

Lazar Hyman, vice president of United Hatzalah, said it was one of the worst tragedies that he had ever experienced. "I have not seen anything like this since I entered into the field of emergency medicine back in 2000," said Hyman.

Prime Minister Benjamin Netanyahu said the nation was praying for the injured in the "huge disaster."

"I want to strengthen the hand of those carrying out rescue efforts and who are operating on site," Netanyahu tweeted.

Each year, hundreds of thousands of Jews — many of them ultra-Orthodox — flock to Bar Yochai's tomb site on Mount Meron, which lies in the Upper Galilee region of northern Israel, about 40 kilometres northeast of the city of Haifa. Bar Yochai's book 'The Zohar' is the foundation of Jewish mysticism.