WASHINGTON ― The list of presidents who have been impeached are as follows: Andrew Johnson, Bill Clinton, Donald Trump and Donald Trump.Donald John Trump on Wednesday became the first US officeholder ― let alone president ― to be impeached tw…

WASHINGTON ― The list of presidents who have been impeached are as follows: Andrew Johnson, Bill Clinton, Donald Trump and Donald Trump.

Donald John Trump on Wednesday became the first US officeholder ― let alone president ― to be impeached twice by the House of Representatives. The vote took place exactly one week after he incited an insurrection at the Capitol and one week before the inauguration of President-elect Joe Biden.

The House voted 232-197 in favour of impeachment. Ten Republicans joined Democrats in voting to impeach, a record number for the president’s party.

Trump released a video statement after the vote, but he made no explicit mention of impeachment in it.

“Mob violence goes against everything I believe in and everything our movement stands for,” he said, dismissing the role he played in inciting his supporters to storm the Capitol last week. “No true supporter of mine could ever endorse political violence.”

The article of impeachment charges Trump with “incitement of insurrection.” It is a single article, narrowly drafted by Reps. David Cicilline and Jamie Raskin while they were in lockdown during the Capitol riot.

The purpose of such a targeted impeachment resolution was to avoid the need for drawn-out hearings and witness testimony. Cicilline told reporters Wednesday morning that they had drafted the legislation to be “very specific.”

“There’s overwhelming evidence of the president’s incitement,” he said. 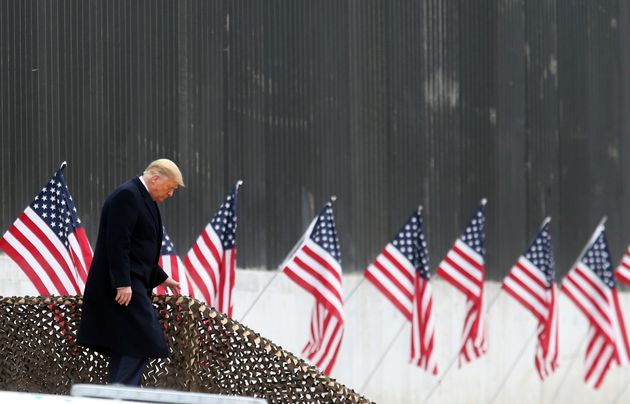 Members of Congress witnessed the incitement and its repercussions with their own eyes when a mob stormed the Capitol building soon after a speech from Trump himself, who spent months telling his supporters the 2020 election had been stolen. Five people, including a Capitol Police officer, died as a result of the attack. That evidence was enough for most House members to say the president ― already deemed too dangerous for a Twitter account ― should be impeached for a second time.

But Trump’s hold on the GOP is still strong. The Republican-controlled Senate is not going to allow for a swift impeachment trial. And even after he inspired a violent and deadly attack on the Capitol, many Republican lawmakers ― including those who were targets of the violence themselves ― still stood by their president.

On the House floor before the vote, Republican lawmakers made repeated excuses for the president. The ranking Republican on the Judiciary Committee, Jim Jordan of Ohio, dismissed the president’s words calling for supporters to march on the Capitol as “cancel culture” run amok.

Rep. Tom McClintock said the attack on the Capitol might never have happened “if we prosecuted [Black Lives Matter] and antifa rioters across the country with the same determination these last six months.”

And House Minority Leader Kevin McCarthy said a vote to impeach would “further divide this nation.”

“Impeaching the president in such a short time frame would be a mistake,” he said. “No investigations have been completed, no hearings have been held. The Senate has confirmed no trial will begin until after President-elect Biden is sworn in.”

McCarthy did actually acknowledge that the president bore responsibility for the attack on the Capitol. He said there was “absolutely no evidence” that antifa took part in the insurrection. And he suggested that he could have supported the formation of a bipartisan commission to look at the riots, as well as a censure resolution against the president.

A smaller proportion of Republicans did break with Trump. Most notably, Rep. Liz Cheney of Wyoming, the No. 3 Republican in the House, said in a statement Tuesday evening that the attack wouldn’t have happened without the president, and that he could have immediately and forcefully intervened to stop the violence. “He did not,” Cheney said.

“There has never been a greater betrayal by a President of the United States of his office and his oath to the Constitution,” she continued, committing to vote for impeachment.

House Speaker Nancy Pelosi said Trump was a “clear and present danger to the nation.”

“The president of the United States incited this insurrection, this armed rebellion, against our common country,” she said. “He must go.”

Intelligence Chairman Adam Schiff called the attack “the most dangerous moment for our democracy in a century.”

And Judiciary Chairman Jerry Nadler noted that the president spent months spreading lies about voter fraud and had convinced his supporters that accepting the outcome of the election posed an “existential threat to their families and freedom.”

He also referred to the words that Trump said in a rally speech on Jan. 6, the day of the attack:

“If you don’t fight like hell, you’re not going to have a country anymore,” Trump said.

“We will stop the steal,” Trump said.

“We’re going to walk down to the Capitol and we’re going to cheer on our brave senators and congressmen and women, and we’re probably not going to be cheering so much for some of them,” Trump said.

But it’s unlikely Trump will be removed from office before noon on Jan. 20, when Biden is set to be inaugurated.

While the press has been full of speculation, I have not made a final decision on how I will vote [on impeachment charges], and I intend to listen to the legal arguments when they are presented to the Senate.Senate Majority Leader Mitch McConnell (R-Ky.)

Senate Majority Leader Mitch McConnell (R-Ky.) has informed Senate Democrats that he will not consent to convening an emergency session to consider impeachment. That means the process is likely to drag into the early days of the Biden administration and prevent the Senate from confirming Biden’s Cabinet in a timely manner.

After the House vote, McConnell released a statement saying, “There is simply no chance that a fair or serious trial could conclude before President-elect Biden is sworn in next week.”

“In light of this reality, I believe it will best serve our nation if Congress and the executive branch spend the next seven days completely focused on facilitating a safe inauguration and an orderly transfer of power to the incoming Biden Administration,” he said.

There is, however, some question about where McConnell stands on the impeachment resolution. A New York Times report on Tuesday said McConnell was “pleased” that Democrats were impeaching Trump.

McConnell sent a note to Republican senators earlier Wednesday, saying, “While the press has been full of speculation, I have not made a final decision on how I will vote [on impeachment charges], and I intend to listen to the legal arguments when they are presented to the Senate.”

The impeachment legislation includes a disqualification from further office if the Senate actually convicts Trump, which would clear him out of the 2024 GOP primary field and potentially allow Republicans to turn the page on his presidency.

If Wednesday is any indication, however, shaking Trump from the Republican Party will be a long, uphill battle.

Republicans were still clamoring for floor time to get on the record in support of Trump, making statements about “sore losers” and “double standards” and a host of other red meat, culture war grievances.

In fact, due to increased security threats, the House has installed metal detectors outside the floor. But dozens of Republicans have refused to actually go through the magnetometers ― or they’ve just set it off by walking through and blown past the cops.

Republicans have inculcated the lessons of Trump, of aggrievement and of aggression. He remains the heart of their party, just with a second impeachment asterisk next to his name.