President Trump went through a “very concerning” period amid conflicting reports and confusion over his health.

US President Donald Trump faces a "critical" next two days in his fight against COVID-19 at a military hospital, his chief of staff said, also revealing that Trump went through a "very concerning" period on Friday while officials were giving calm, upbeat reports.

"We're still not on a clear path yet to a full recovery, said chief of staff Mark Meadows outside the Walter Reed National Military Medical Centre.

His comments were in sharp contrast to the rosy assessment offered moments earlier by Mr Trump's doctors, who took pains not to reveal the president had received supplemental oxygen at the White House before being flown by helicopter to the hospital.

Mr Trump's doctors, for their part, painted a rosy picture of the president's health in a press conference at Walter Reed National Military Medical Centre. But the briefing by Navy Commander Dr Sean Conley and other doctors raised more questions than it answered.

Mr Trump, meanwhile, has told his longtime friend and sometimes lawyer Rudy Giuliani that he's "going to beat" the coronavirus.

READ MORE: What happens if Donald Trump becomes too sick to govern as President? 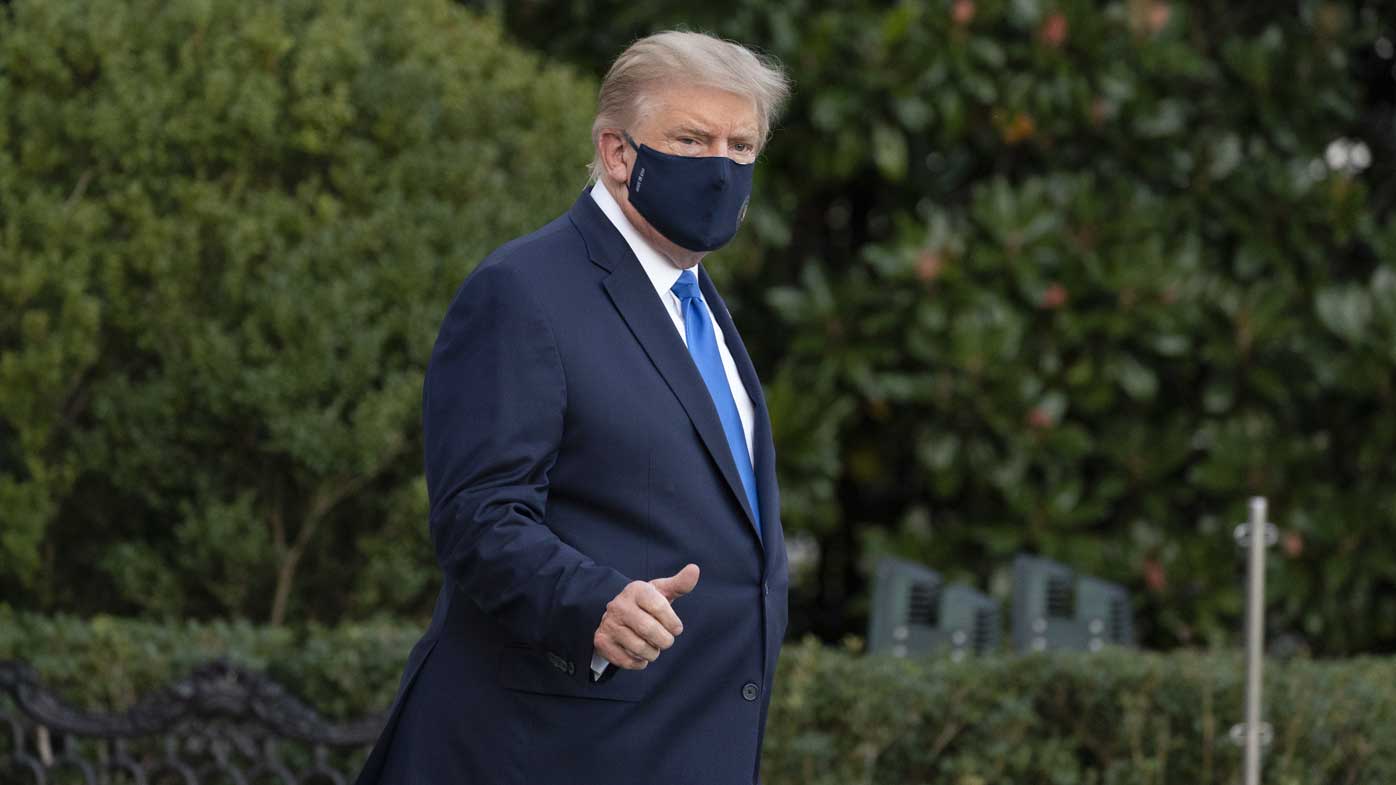 According to a person familiar with Trump's condition, Trump was administered oxygen at the White House on Friday before he was transported to the military hospital. The person was not authorised to speak publicly and spoke to The Associated Press on condition of anonymity.

READ MORE: What we know, and what we don't, about Trump's coronavirus

Dr. Conley, updating the nation on the president's condition from Walter Reed on Saturday afternoon (Sunday 3am AEDST) , said Trump had been fever-free for 24 hours.

"Thursday no oxygen. None at this moment. And yesterday with the team, while we were all here, he was not on oxygen," Dr. Conley said. He said that Trump's symptoms, including a cough and nasal congestion "are now resolving and improving." 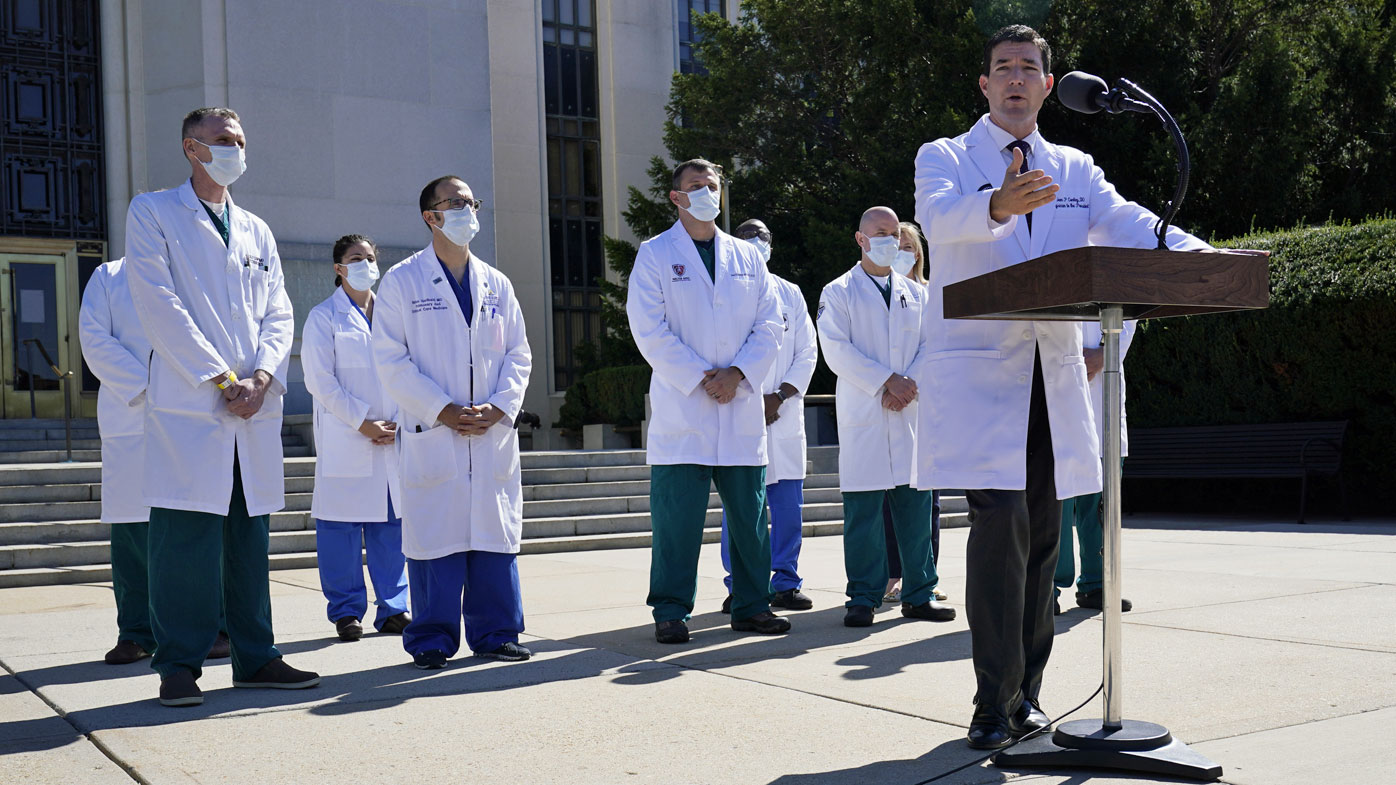 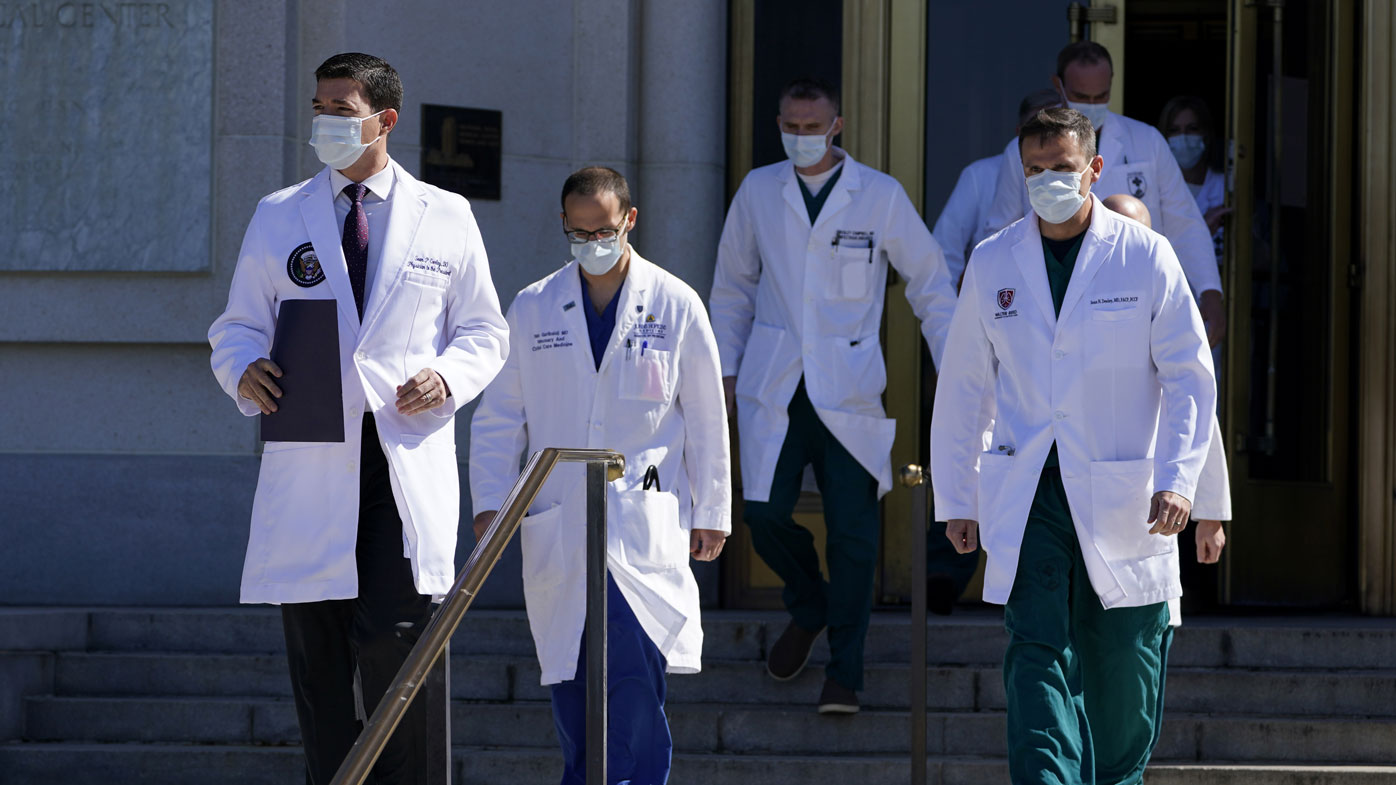 However, a source familiar with the President's health told White House pool reporters after the briefing from his doctors that the next 48 hours will be critical in determining how he fares.

"The President's vitals over the last 24 hours were very concerning and the next 48 hours will be critical in terms of his care. We are still not on a clear path to a full recovery," the source told reporters.

Mr Trump is 74 years old and clinically obese, putting him at higher risk of serious complications from a virus that has infected more than 7 million people nationwide and killed more than 200,000 people in the US.

The administration has consistently been less than transparent about the president's health as the virus spread inside the White House. Aides declined to share basic health information about the president, including a full accounting of his symptoms, what tests he's undertaken and the results. The first word that a close aide to Trump had been infected came from the media, not the White House.

In a memo released late Friday, Dr. Conley did report that Mr Trump had been treated at the hospital with remdesivir, an antiviral medication, after taking another experimental drug at the White House. He added that Mr Trump is "doing very well" and is "not requiring any supplemental oxygen."

READ:  What the new Victorian COVID-19 rules mean for you 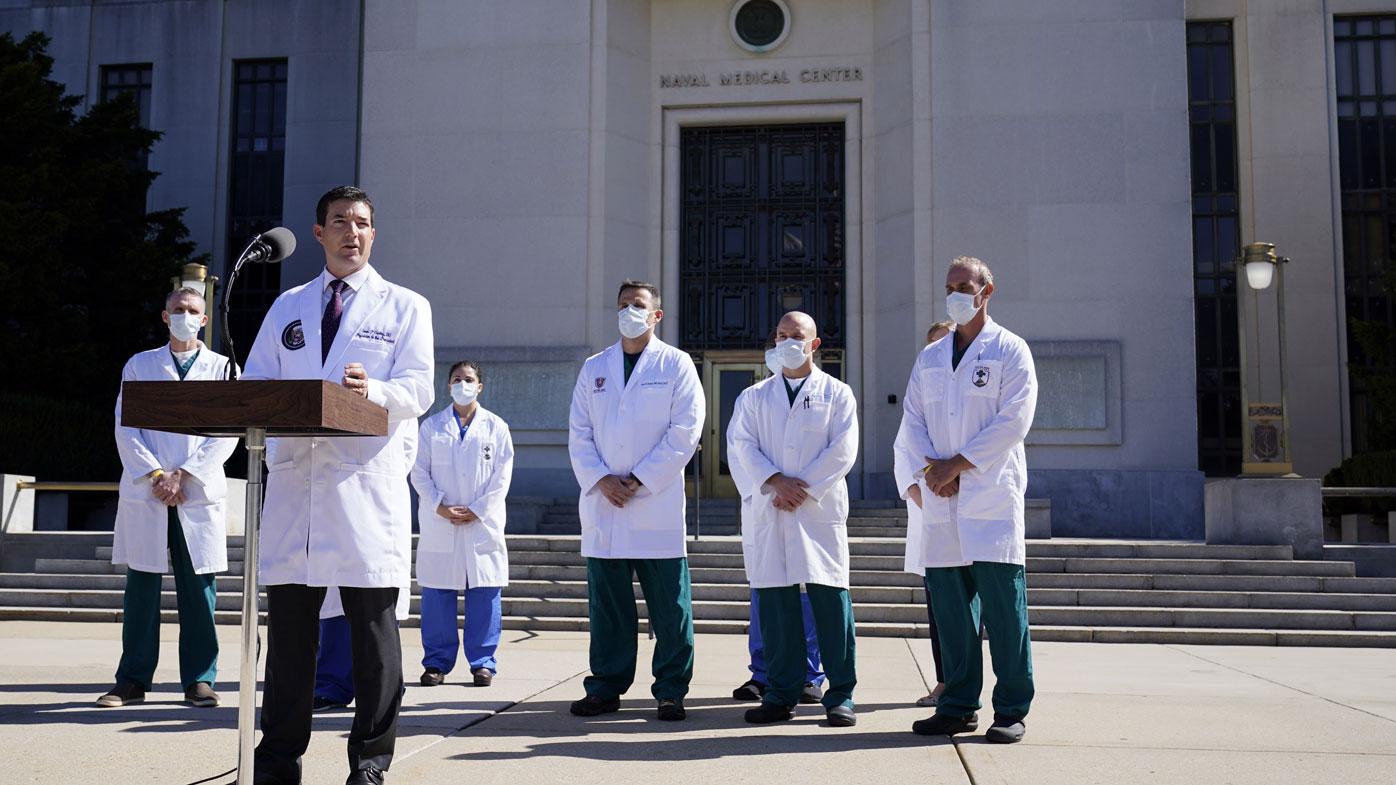 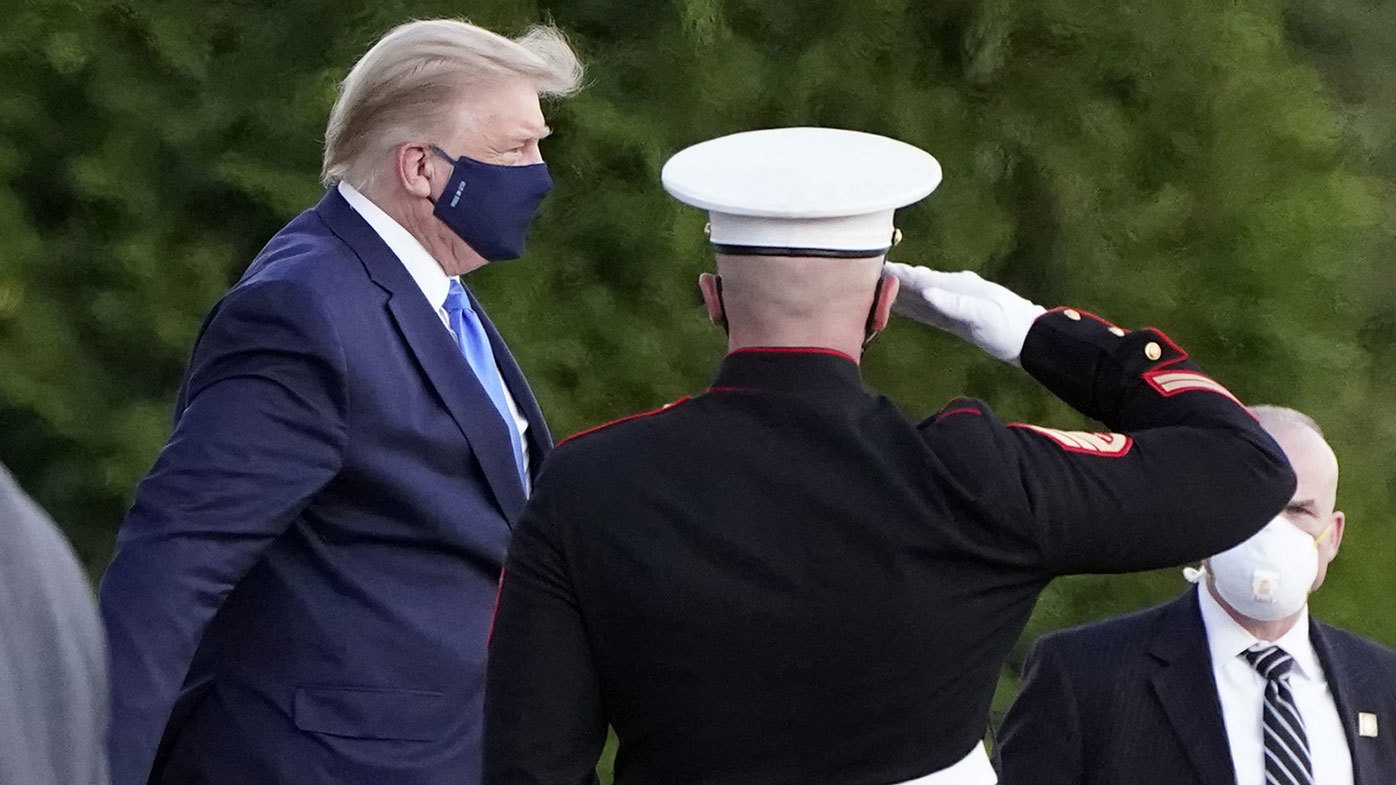 Dr. Conley declined to say when Trump had last been tested before he was confirmed to have COVID-19 late Thursday.

He initially suggested that Mr Trump was 72 hours into the diagnosis, putting the confirmation of the infection to Wednesday. Dr. Conley later clarified that Mr Trump was administered an accurate test for the virus on Thursday afternoon, after White House aide Hope Hicks was confirmed to be positive and Trump exhibited unspecified "clinical indications" of the virus.

On Saturday, Dr. Conley said Trump's blood oxygen level is 96 per cent, which is in the normal range. The two experimental drugs he has received, given through an IV, have shown some promise against COVID-19.

On Friday, he was given a single dose of a drug Regeneron Pharmaceuticals Inc. is testing to supply antibodies to help his immune system fight the virus. 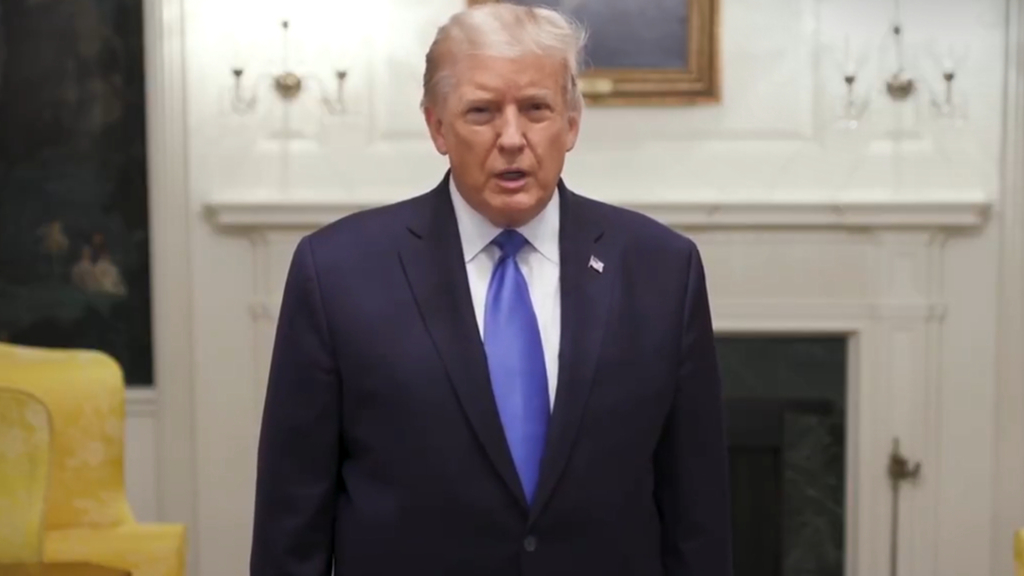 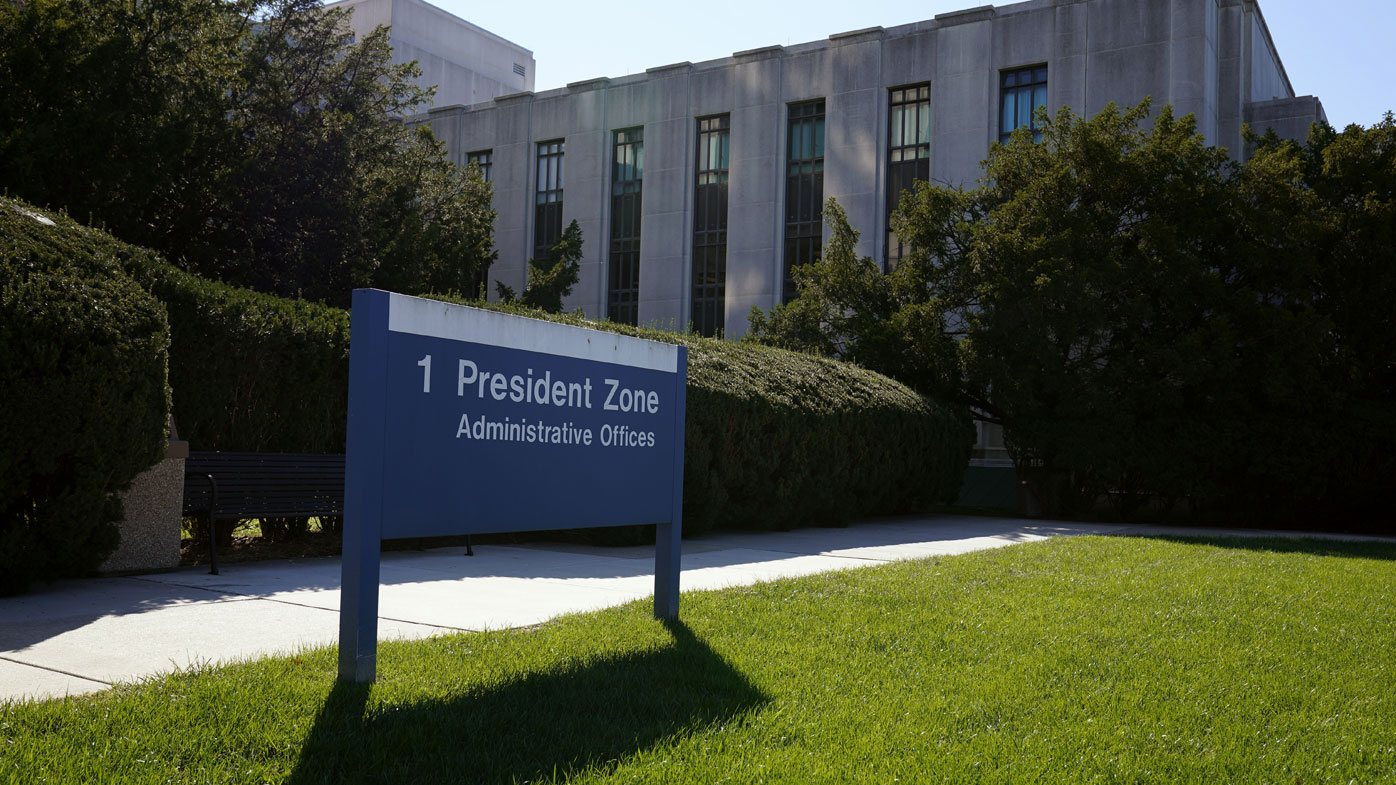 On Friday night, he began a five-day course of remdesivir, a Gilead Sciences drug currently used for moderately and severely ill patients. The drugs work in different ways — the antibodies help the immune system rid the body of virus and remdesivir curbs the virus' ability to multiply.

"We're maximising all aspects of his care," attacking the virus in multiple ways, Dr. Conley said.

"I didn't want to hold anything back if there was any possibility it would add value to his care."

The White House said Mr Trump was expected to stay at the hospital for "a few days" and he would continue to work from the hospital's presidential suite, which is equipped to allow him to keep up his official duties.

In addition to accessibility to tests and equipment, the decision was made, at least in part, with the understanding that moving him to the hospital later, if he took a turn for the worse, could send a worrying signal.

READ:  8 Questions To Ask Yourself Before Getting A Pet

Trump says he is 'going to beat' coronavirus

MrTrump has told his longtime friend and sometimes lawyer Rudy Giuliani that he's "going to beat" the coronavirus.

Trump reportedly told Giuliani on the call: "I feel I could get out of here right now. But they're telling me there can always be a backstep with this disease. But I feel I could go out and do a rally."

Trump also reportedly explained that he continued to engage in high-risk activity despite the pandemic because he's the "president of the United States. I can't lock myself in a room. … I had to confront (the virus) so the American people stopped being afraid of it so we could deal with it responsibly."

He also said he hopes that by beating the virus he "will be able to show people we can deal with this disease responsibly, but we shouldn't be afraid of it."

- Reported with Associated Press and CNN