Local surfer and photographer Lewis Loughlin said he had just woken up when he noticed ‘a big black shadow’ in the ocean off Maroubra Beach.

Two hungry dolphins have been snapped hunting a school of thousands of salmon in shallow waters off a popular Sydney beach, just metres away from where beachgoers were standing.

Local surfer and photographer Lewis Loughlin told 9news.com.au he had only just woken up around 6am last Saturday when he noticed "a big black shadow" in the ocean off Maroubra Beach.

After flying a video drone above the famous beach, Mr Loughlin said he realised the shape was thousands of fish being chased into shore by the dolphins. 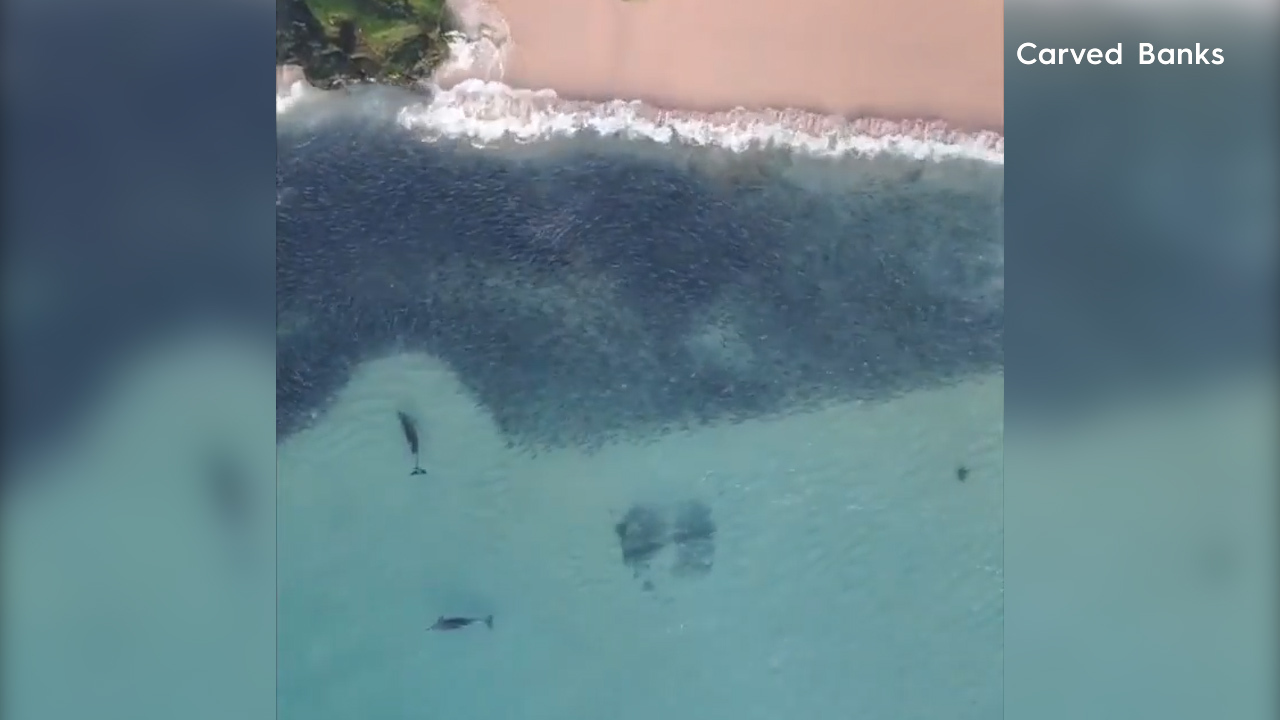 "It just looked insane because they were so close to the beach and in such shallow water," he said.

"I do a lot of drone photography in this area, lots of marine life stuff, but never seen that.

"(It) looks like something from the National Geographic Channel."

In the aerial vision, the two dolphins can be seen rapidly swimming towards the huge cluster of salmon, which scatters in all directions in an attempt to escape them. 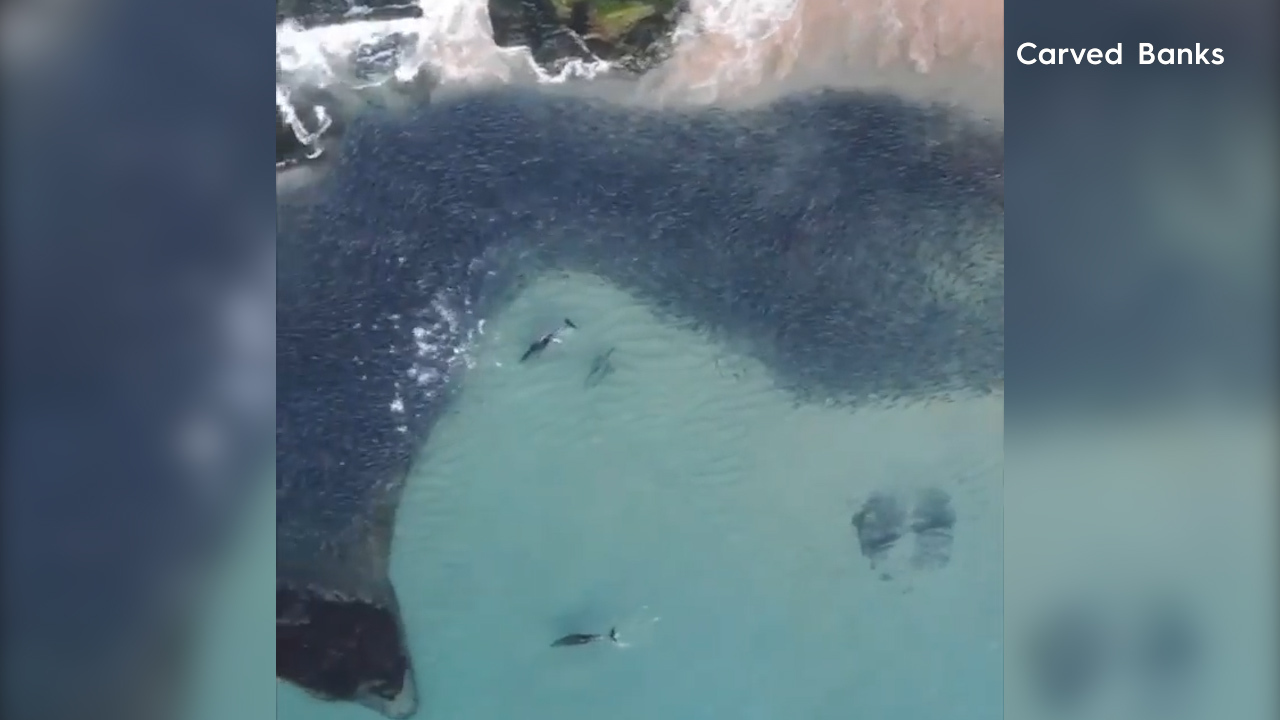 The fish become stuck between Maroubra's shoreline and a rocky headland poking off the beach, but did not appear to be caught by any of the dolphins.

Mr Loughlin said in recent years the Maroubra area has not seen as much marine life activity off the beach, but that has changed in the last few weeks.

He also said that while filming the two dolphins chasing the salmon last weekend, he noticed one of them split away from the cluster and became distracted by an elderly swimmer in the water. 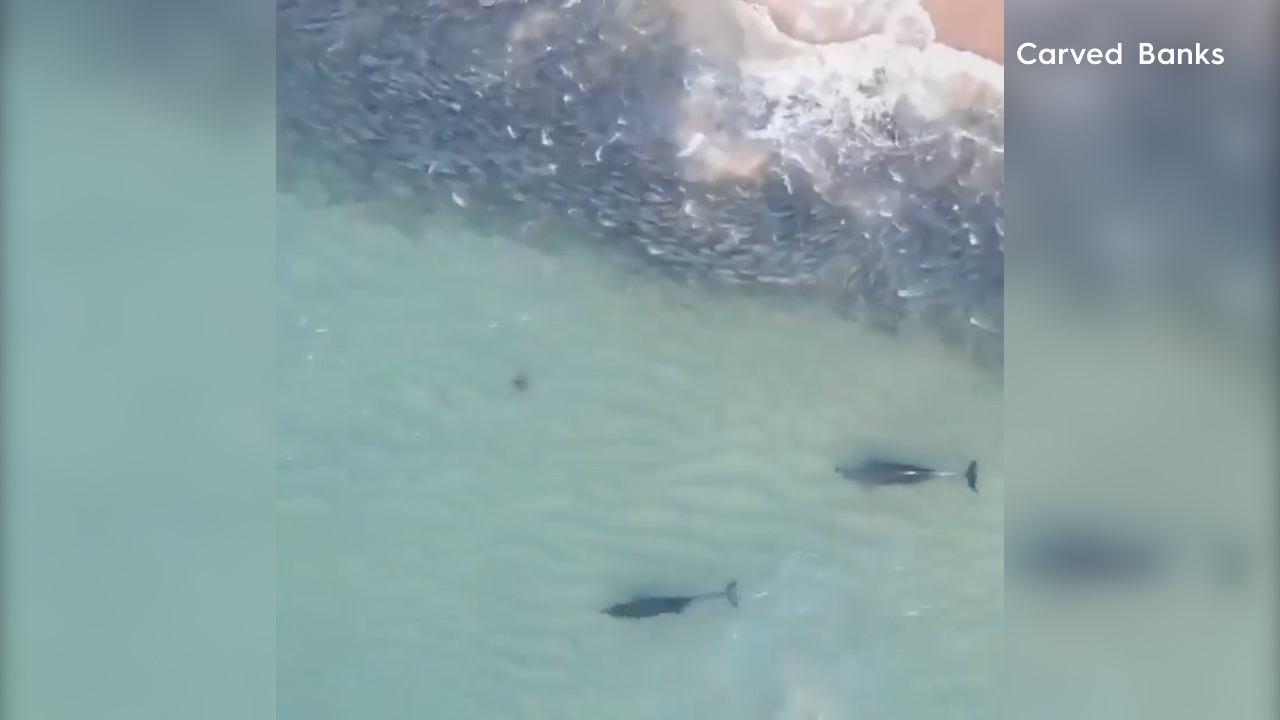 "(The swimmer) got in the water and he could see this dolphin coming in really close," he said.

READ:  Man charged with the murder of Sydney woman

"They had a face off. The dolphin swims right up to him to check him out, turns around and goes back out again.

"It was such a magical moment — the dolphin looks huge compared to him."

The underwater stand-off comes just weeks after experts warned a shift in recent ocean temperatures and natural currents may have pushed large schools of fish such as salmon closer into shore, therefore resulting in this year's uptick in shark attacks.

READ MORE: Deadliest year for shark attacks since 2014 may be due to water temperatures

"When there's a lower sea surface temperature — when the water's basically cooler compared to surrounding areas — you tend to get more white sharks closer to shore because they're feeding on the animals in the water like salmon and that's when we tend to get a spike in humans getting bitten as well," Professor Robert Harcourt from Macquarie University's Marine Research Centre told 9news.com.au.

"We're not a natural prey of any marine critter but if they're coming in to hunt salmon, and now is peak salmon period for Australian salmon… then you get sharks coming into feed upon them and the human leg is about the same size as a nice tasty salmon.

"When we get a year like this, when we seem to be getting a spate of shark incidents, it tends to suggest that the cold waters are constrained closer to shore, so it just means that everything is a little bit closer."

Shark-related incidents around Australia in 2020

According to the Taronga Conservation Society's Australian Shark Attack File, these are all of the shark-related incident bites that have been recorded so far this year.