Tasmania’s energy picture is complicated by past deals and a rush to bet on what might be the wrong option, writes Norm Vanderfeen.

The average household consumes about 2MWh every three months. The approximate 250,000 households in Tasmania consume 500,000MWh (500GWh) a quarter for a total of 2000GWh a year. An approximation for the power used at places of work and play is maybe another 2000GWh a year.

Hydro claim they produce ‘9000 gigawatt hours of clean electricity from hydropower’. If the households who own the Hydro were once again given priority, then they already have over double required capacity; it’s the profiteers from the National Energy Market (NEM) who have a problem.

It needs to be understood that the power generated by the Hydro is virtually free from an engineering point of view; the only real expense is new bearings and seals every few years for the turbines which were paid for decades ago.

$20 per/MWh for 9000 gigawatt hours would give the Hydro $180 million for maintenance and administrative expenses. This power is transferred to households via transmission lines paid for decades ago. On the way it passes though the NEM before being delivered to the household at $270 per/MWh (+service fees).

Once upon a time, Tasmania had a Premier called Electric Eric (Reece) and he used to say that one day energy would be expensive and industries would come to Tasmania to take advantage of that cheap power. We Tasmanians laboured for a few decades and did produce the world’s greenest, cheapest power and had enough left over to give a third of the power to Comalco and friends. The Hydro was a public utility delivering power to Tasmanians at cost price and overheads. Now we are to become Australia’s Battery.

What happened? Starting in Victoria in the late 1980’s there was an asset stripping of public utilities and monopolies by corrupt/stupid/both politicians that ended up with these assets in the hands of the bankers and friends for very little expense. There has never been a privatisation anywhere in the world that has resulted in better service and cheaper prices.

This led to the National Energy Market (NEM) which turned utilities with prices set by cost to a price set by a trading floor. Basslink was conceived by the bankers to make our ‘assets’ available for profit creation by the players in the NEM; the costs are on us.

You will see that last year Australians had some of the prices at $0.24/kWh. It’s gone up a lot since then. In Tasmania, the rate is $0.27/kWh. If you factor in the $400 per year service fee, it places Tasmania in the world’s top ten highest household prices.

Before the NEM the Hydro was a power utility run by engineers and tradesmen. They would tell the accounting department their running costs and future requirements and accounting would send out the bills. There was a workshop/office in every town manned by locals who delivered quick efficient services. As part of joining the NEM the Hydro was split into three companies/profit centres, requiring layers of complexity for no logical reason. This pie chart is from the office of the Tasmania Economic Regulator.

Electricity Pricing Explained doesn’t really explain how and why we are being gouged. Shown below are the cost components of a typical electricity bill, 2018-19, from the Office of the Tasmanian Economic Regulator 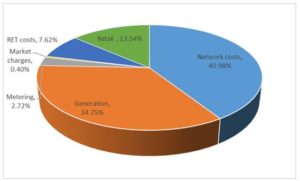 On a $500/quarter power bill this is where your money goes:

The average household uses 2MWh a quarter so the engineering cost to produce that power is approximately $40.00. The other $133.75 is mainly ‘financial’ costs relating to Singapore and Macquarie Bank.

Someone I respect greatly is John Lawrence and in this article he looks at what where the costs come from The Wheelings and Dealing of the Hydro.

From the Article: “Apart from onerous offtake arrangements, Hydro locked in interest rates used to calculate the Basslink fee for the full 25-year term, meaning expected future losses from a higher rate adds an extra liability of $371 million to Hydro’s balance sheet. Hydro will end up paying more in penalty interest than the original Basslink cost of $875 million.”

I would like to remind Tasmanians that they are the owners of the Hydro and are therefore liable for its debts. It’s in everyone’s interest to look at the information from John Lawrence on the Basslink Saga here Tasfintalk – Electricity.

The best solution for transferring any additional power from Circular Head is for TasNetworks to upgrade the existing transmission line to the substation at Burnie. That’s what we are paying them for.

Someone needs to ask the Circular Head Council why they aren’t calling for an upgrade to the existing transmission lines if there is a capacity problem.

It’s not good enough that TasNetworks shirk their responsibilities and sit back while Tasmanians have to worry about a Hong Kong firm destroying landowner’s intrinsic value for profits in Hong Kong. We own TasNetworks but they aren’t working for us. The only project TasNetworks is excited about is a second Basslink for the NEM. This $3.5 billion Marinus fiasco is for a group called UPC.

When Basslink was first conceived, the cost was going to be $400 Million, it ended up costing $780 million. The only reason the Hydro couldn’t fund this was because politicians were stripping too much revenue every year.

The Singapore government and investors ended up paying the $780 million to own the cabled then valued Basslink at $1.2 billion. They leased it back to us at a total cost of $115 million per year. The cost of running the Basslink is $15 million a year. This means $100 million a year to Singapore. The total return to Singapore over the 25 year contract is $2.5 billion. That $100 million divided between the 250,000 households in Tasmania adds $400 to the annual power bills.

The reason given for Basslink was ‘energy security’. It’s now obvious that 320km of poorly-shielded cable lying on the bottom in shallow waters doesn’t give much security, once your dams have been run dry feeding the cable.

Retired Engineer Kelvin Jones points out that the cable was impacted by something: likely cause of Basslink failure is the Geelong Star. The fact this cable is laid across prime scallop beds isn’t ideal. If the cable failed because of current overload (650MAmp on a 500MAmp rated cable) then as a retired engineer I can tell you this: when a cable gets ‘cooked’ the insulation is damaged along the length of the cable, and there are probably more stressed points along the cable. Any fishing boat hook ups or new water leaks and down it goes again. Perhaps this is the reason of the urgency for a proposed second Basslink.

The people on the North Island can’t get their utilities back but Tasmanians can. One thing Tasmanians have agreed on over the decades was to keep the Hydro in public hands so we still have control. All we have to do is cut the cable and return to a utilities type pricing regime.

Solar is already happening and it is the achilles heel of the national grid. More solar equals less need for the NEM. The Hydro is aware of this and cut the solar feed-in tariff to below 20% of the normal tariff to discourage solar installations. A better alternative for energy security would be to take some of the $3.5 billion to be invested in a new Basslink which we will end up paying for with interest and invest it in solar by putting 10KW solar power systems with batteries on 100,000 homes at $10,000 a home.

An example of this already happening is with the Australian super funds’ investment in the Granville windfarm. After installation, people agree to keep paying ‘power’ bills to pay for installation, at around $2000 a year it would be paid for in five years. They then own part of the grid and the money can then be re-lent by the bank.

This scheme would provide employment, a skills base and distributed energy security.

This would leave Hydro to dig itself out of the hole it dug for itself and sell all the power to the big island to pay down its $2 billion debt. If this doesn’t happen, the Hydro could end up bankrupt and that would be one enormous swindle. It is typically poor for our politicians and energy bureaucrats to be supporting a $3.5 billion debt without taking the time to investigate new, tested technologies such as tidal generators. 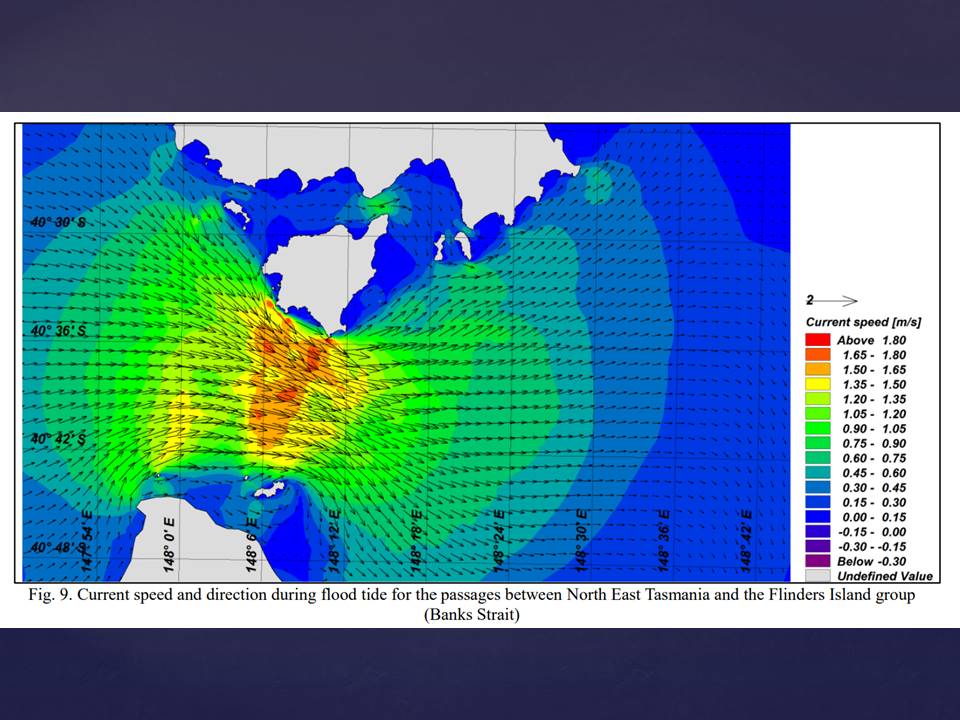 ‘Characerisation of the tidal current resource in Tasmania’ – Current speed and direction during flood tide for the passages between north-east Tasmania and the Flinders Island group (Banks Strait).

At the 8 minute point in this video, the environmental studies on the site in Scotland are discussed – Can Underwater Turbines Solve Our Energy Problems?

This is turbine built by Siemens operating in Ireland: Turn the tides into energy. If they can do it in Scotland then we can do it here. This turbine is Australian-made.

Places around the north-west Tasmanian islands, like Montague Channel, Walkers Channel, the ends of Hunter Island, and the Roller Shoals, are all spots with enormous potential for large scale production. Elsewhere there are rivers and streams in Tasmania with energy potential. Other areas include The Tamar (under the Batman Bridge), the Derwent (above New Norfolk), the Potboil (Port Sorell) and Georges Bay (St. Helens).

This playlist shows a variety turbines and wheels for all locations. This system would get power from the Hydro canals – Canal Instream Energy Systems – Installation.

This is Montague Channel next to the proposed Robbins Island windfarm.

The dark blue areas are where the strong tides gouge the channels out which could equate to hundreds of MWh every day.

The rugged wildness of the islands of north-west Tasmania is unique, has great tourist potential and is an asset that should be handed on unspoiled for future generations.

Final note: You Can make a Difference

This isn’t about your energy security it’s about financial security for you and generations to come. You can have a say and make a difference. Take a second to share on social media or take a minute and get the email addresses from the list below and share this article or ask questions based on the information.

Be polite. Make them aware of your concerns and ask if they are concerned too. You will probably get a meaningless reply but politicians count numbers and this should be an issue for the next election(s).

Norm Vanderfeen is a retired electrical engineer from Wynyard, north-west Tasmania. This article was republished (with some edits) from his website – https://thebattler.com/index.htm#frontpage