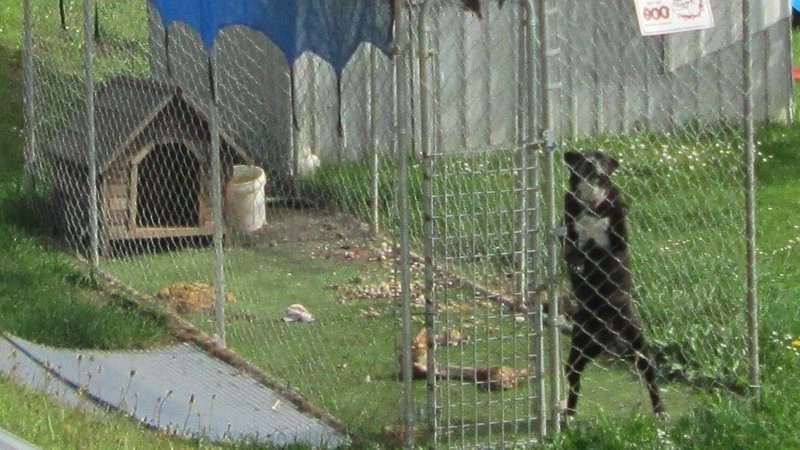 Tasmanian animal welfare provisions regarding dogs are inadequate for a number of reasons, argues a law reform advocate.

For many people, being able to escape the house and take the family dog for a walk has been one of the simple, enduring respites from the COVID-19 lockdown. Yet the public might be surprised to learn that there are dogs in Tasmania that never receive exercise at all. Instead they spend their whole lives confined to a cage or tethered by a lead. Seeing one such caged dog in my suburb prompted me to notify the RSPCA.

I have since learned that if a dog has access to food, water, and shelter, the RSPCA cannot legally remove the dog from the owners due to lack of exercise alone, even though Tasmania’s Animal Welfare Act 1993 says a confined animal must have exercise and Animal Welfare (Dogs) Regulations says that tethered dogs must have daily exercise off the tether. But according to the RSPCA, there is no hope of a successful prosecution ‘beyond reasonable doubt’ of animal cruelty for lack of exercise alone. Even if that means a dog is caged for its entire life.

Lack of exercise for animals is currently considered by the RSPCA to be mental suffering, not physical suffering. Mental suffering is not explicitly recognised as cruelty in Tasmania’s Animal Welfare Act.

Some of us remember a time when, as children, we begged our parents for a dog. Inevitably mum or dad would then start talking about responsible ownership and list all of the things necessary to care for a dog. Any young child can tell you that a dog needs exercise.

And isn’t that one of the best things about owning a dog? The explosion of sheer doggy joy when a lead is held aloft for ‘walkies’? Of seeing a pooch running in delighted circles around a park or backyard?

Most of us expect dog owners to give their dogs exercise or at least freedom of movement and of course most of them do, but according to the RSPCA, it is not uncommon in Tasmania for dogs to be continuously tethered or caged without ever being released.

Anecdotally, it seems that some people keep dogs in cages as a relatively cheap security system for their property, especially if there is inadequate or no boundary fencing.

Tasmania’s animal welfare laws have adequate punishment provisions. But laws are only as good as their enforcement. If a law cannot be enforced, it is irrelevant how tough the penalties are for breaking it. As the RSPCA officer pointed out, how do you prove that someone is not taking their dog for a walk? The RSPCA doesn’t have the time or financial resources to sit outside someone’s house filming the occupants not walking their dog. It is also unclear whether it would be even legal for the RSPCA to do conduct such filming. Aside from the legality of it, secretly filming someone’s house is way too creepy.

So what is the alternative?

Currently, there are four different pieces of legislation in Tasmania about dogs. These divide legal responsibility across local and state government, two state ministerial portfolios (Minister for Local Government and Minister for Primary Industries, Water et al; and two animal welfare organisations (RSPCA and animal welfare division of Biosecurity Tas). It means the laws are fragmented and enforcing them is not necessarily straightforward. Any changes may be ad hoc and potential confusing. 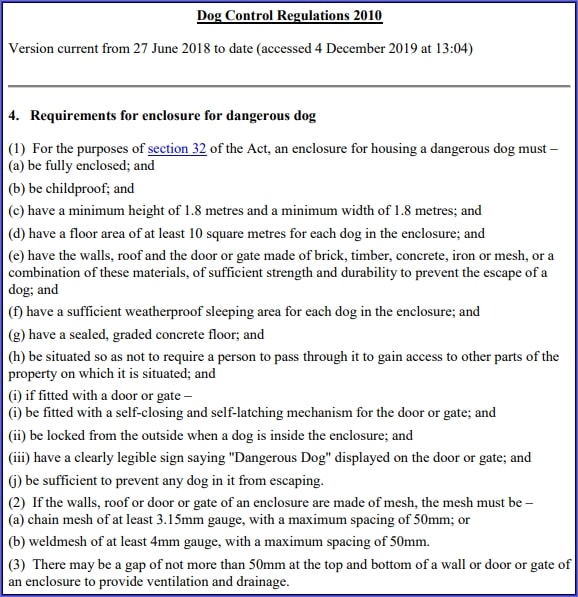 Laws are made to remedy a problem. Animal welfare laws aim to prevent and punish animal cruelty. Yet there is a presumption in Tasmania’s dog laws that owners can cage and tether their dogs, albeit with some exemptions. Given that the aim of the legislation is to prevent and stop cruelty, it would be more sensible to begin by assuming that caging and tethering dogs should not be allowed.

Monitoring and enforcing legal exemptions about when dogs should be caged is easier and more consistent than trying to monitor and enforce the exemptions to confinement.

Dangerous dogs that are a risk to the public or to other animals definitely need to be confined. Uncontrolled dangerous dogs can kill other animals and people. Recently there have been terrible dog attacks on penguins in Tasmania. Dangerous dogs are already accounted for in the legislation. If dangerous dogs need to be confined, they must be kept in enclosures that have at least ten square meters of space for each dog. Curiously, if a dog is not declared dangerous, not only can it be kept continuously confined in effect without any good reason, there is no minimum numerical amount of space required for the dog. The only requirement is that the confined dog must be able to turn its body around and stretch its legs out when lying down. That means that a cage is sometimes not much bigger than the dog itself. And there is no legal way to compel someone to ever let it out of the cage.

Aside from dangerous dogs, dogs that work all day on farms are sometimes caged at night. Legal exemptions already exist for farm dogs as a class too, such farm dogs riding on the back of a vehicle for the purposes of herding livestock.

All dogs have to be registered with local councils. Dogs that absolutely must be caged can have that requirement recorded by the council at the time of dog registration. Even if a dog is dangerous, it still needs to be exercised safely. Caged dogs could be regularly checked by the animal control officer at each local council. Such officers are already legally authorised to monitor the conditions of dog housing, barking and general management. While it would be the job of local councils to ensure confined dogs receive freedom of movement and exercise, it is only the state government that has the power to make the necessary changes to the animal welfare laws and dog control regulations.

Last year the Australian Capital Territory legally recognised the sentience of companion animals. Sentience means that animals are capable of perceiving and responding to the world. The Australian Veterinarian Association website confirms that animal sentience is scientifically proven.

Some regions in Canada now have independent provincial inspectors to investigate animal welfare, and Lisbon, Portugal even has an animal welfare ombudswoman. Various other countries have stricter, and better, animal welfare laws.

In contrast, some of Tasmania’s animal welfare legislation has not had a substantial review for over twenty-five years.

The Minister for Primary Industries, Guy Barnett, has confirmed that it is possible to keep a non-dangerous dog in a cage that is smaller than is legal for a dangerous dog. The Minister can change this anomaly in the Dog Regulations without needing a vote in parliament. To date he is not inclined to make a change regarding cage size or the confinement of dogs (see correspondence below).

As any member of the public is allowed to do, I have referred the issue of animal welfare law reform to the Tasmanian Law Reform Institute, and have started a petition.

Effective laws are consistent laws that penalise the minority of wrong-doers. If people have a dog they cannot care for adequately, the current laws still allow them to keep it. At the moment it is easier for a local council to take action against a dog owner about a barking dog as a noise complaint than it is for anyone to act about dogs in life-long confinement. Public sentiment about the treatment of animals has been growing consistently in recent decades.

Tasmania’s current animal welfare laws in their design and enforcement are contrary to public expectations about how animals should be protected by the law and cared for by their owners.

Stephanie Gleeson is a graduate from the University of Tasmania with an interest in law reform and animal welfare. 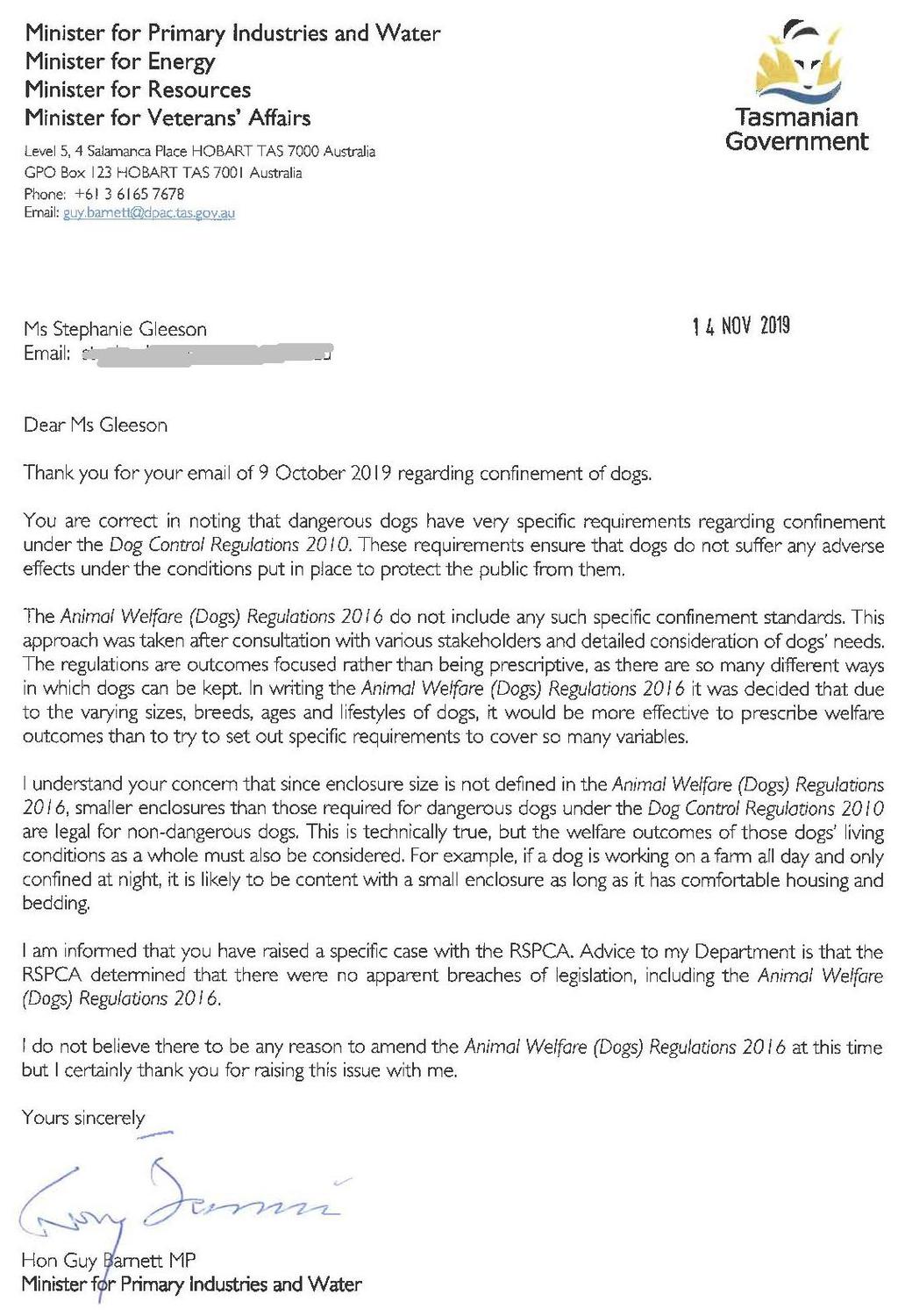