Never miss a thing. Sign up to HuffPost Australia’s weekly newsletter for the latest news, exclusives and guides to achieving the good life.Demi Lovato’s quarantine engagement to Max Ehrich has gone the way of most things in the y…

Demi Lovato’s quarantine engagement to Max Ehrich has gone the way of most things in the year 2020: disaster.

The two called it quits last week, just two months after announcing their engagement with reports circulating that it was a “tough decision” for both parties.

Some sources claimed Lovato’s family was “hesitant” about Ehrich after rumours of his clout-chasing past made the internet rounds, while others said the relationship failed to make the jump from quarantine to real life, as the two got back to work.

But now Ehrich is claiming that he was completely caught off guard by the breakup, which he said he found out about “through a tabloid.”

“Imagine finding out about the status of your relationship through a tabloid,” he wrote in a series of posts on his Instagram stories on Saturday. “While your in the middle of filming a biopic movie about a Pastor in a Christian Church whose intention of the film is to help people.” 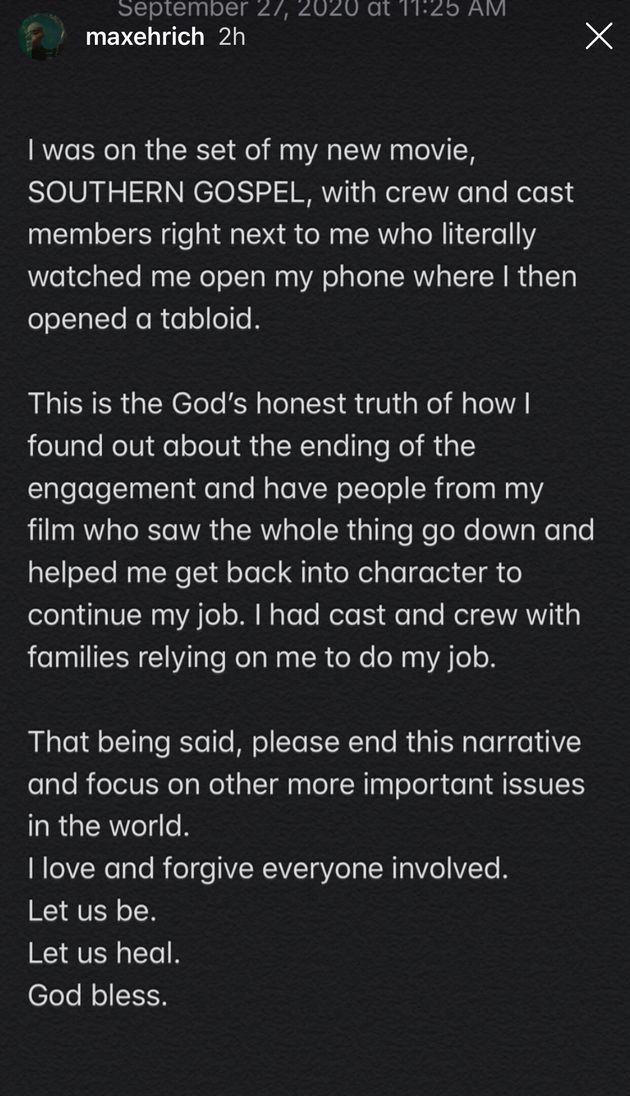 Ehrich is currently filming the movie “Southern Gospel” in Atlanta, while Lovato appears to be spending time with friends in Los Angeles.

He reiterated his claims on Sunday, writing that cast and crew members witnessed him “open my phone where I then opened a tabloid.”

“This is the God’s honest truth of how I found out about the ending of the engagement and have people from my film who saw the whole thing go down and helped me get back into character to continue my job,” he wrote. “I had cast and crew with families relying on me to do my job.”

Ehrich ended his Instagram statement imploring fans to “please end this narrative and focus on other more important issues in the world.”

“I love and forgive everyone involved,” he concluded. 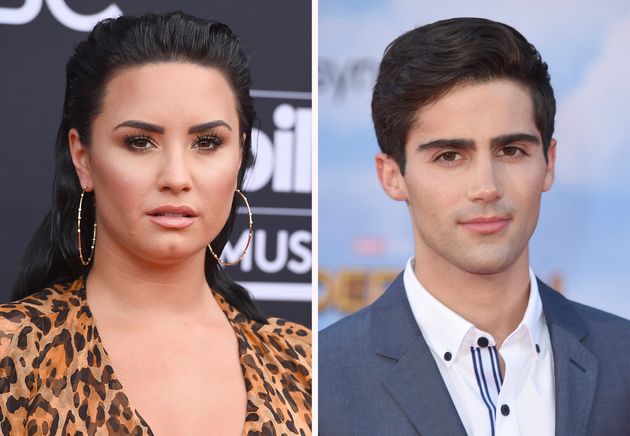 Lovato’s camp is now hitting back in the press with an unnamed source telling People that the pop star told the actor their relationship was over before the news broke.

“Demi made Max aware that the relationship was over and it was going to come out in the press,” the source said.

Lovato has yet to comment on the breakup herself, preferring to send her message via a selfie posted on Thursday sans engagement ring while wearing a shirt with the words “dogs over people.”

The former couple started dating in March with the “I Love Me” singer accidentally making their relationship Instagram official by appearing on Ehrich’s livestream, while he was performing to fans.

He popped the question to Lovato in July with a ring that reportedly cost an estimated $1 million.

“I knew I loved you the moment I met you. It was something I can’t describe to anyone who hasn’t experienced it firsthand but luckily you did too,” Lovato wrote in a post announcing their engagement at the time. “I’ve never felt so unconditionally loved by someone in my life (other than my parents) flaws and all.”

Now, it seems the two are rinsing themselves clean of the relationship, with Ehrich posting a video of himself seemingly getting baptised on Sunday.

Had such a profoundly beautiful experience being baptized on Friday. Thank you so much @jeffreysmith (in real life)