Never miss a thing. Sign up to HuffPost Australia’s weekly newsletter for the latest news, exclusives and guides to achieving the good life. “The Donald” it is not.On Friday, Netflix will premiere “Deaf U,” a com…

On Friday, Netflix will premiere “Deaf U,” a coming-of-age documentary series that follows a tight-knit group of deaf students at Gallaudet University, the renowned private college for the deaf and hard of hearing located in Washington, D.C. The show — which is co-executive produced by Deaf model and activist Nyle DiMarco — promises an “unprecedented, unfiltered, and often unexpected look inside the Deaf community,” according to a press release. And a promo clip Netflix dropped for the show on Thursday seems to deliver on those goods.

In the clip, the main cast breaks down a little Deaf culture for the audience by explaining sign names ― the special signs that are used to identify specific individuals in American Sign Language.

“Instead of spelling the names out,” one cast member signs, “we use sign names based on our traits.”

Several cast members then tell the stories behind their own sign names, which vary from having very blue eyes to being obsessed with candy.

Lydia Callis, a nationally certified sign language interpreter, advocate and child of a deaf parent, explained in a 2015 HuffPost blog post that sign names can’t be chosen by the individual and are given to them by a member of the Deaf community. Your sign name is a “major part of your deaf identity” according to Callis, and because you can’t simply change your own sign name, “these names carry a history and personality all their own.”

“While it might seem like a novelty to hearing people, having an ASL name is very meaningful for those in the deaf community, and it could even be considered an honor,” Callis wrote. “These names aren’t just given out to anyone — they are a [rite] of passage into the deaf community.”

She concluded: “To have a name sign means you are officially part of the Deaf world.”

So President Donald Trump should definitely not be offended whatsoever by his sign name — which the “Deaf U” cast members explain looks like this:

Or, ya know, a comb-over flapping in the wind.

“You can tell if someone’s a Trump supporter — they will spell out his name: T-R-U-M-P,” one cast member explains. “But if you don’t like the man, you’re gonna go like this …” (see above).

He added: “’Cause we all know that man has a toupee.”

“Deaf people gave Trump a sign name so he should feel honored,” a cast member says in the “Deaf U” clip.

Hey, whether he likes it or not, it does echo his signature look. 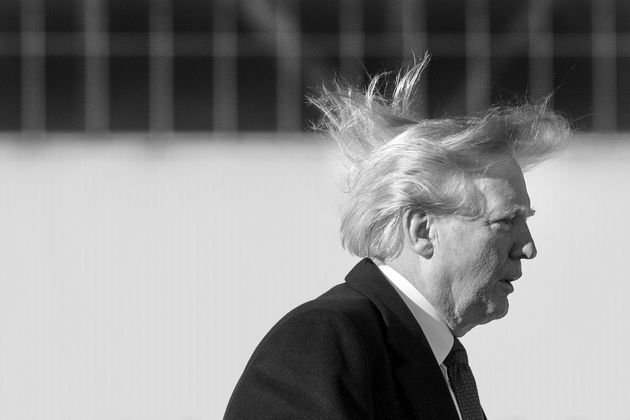 Catch the trailer for “Deaf U” below.