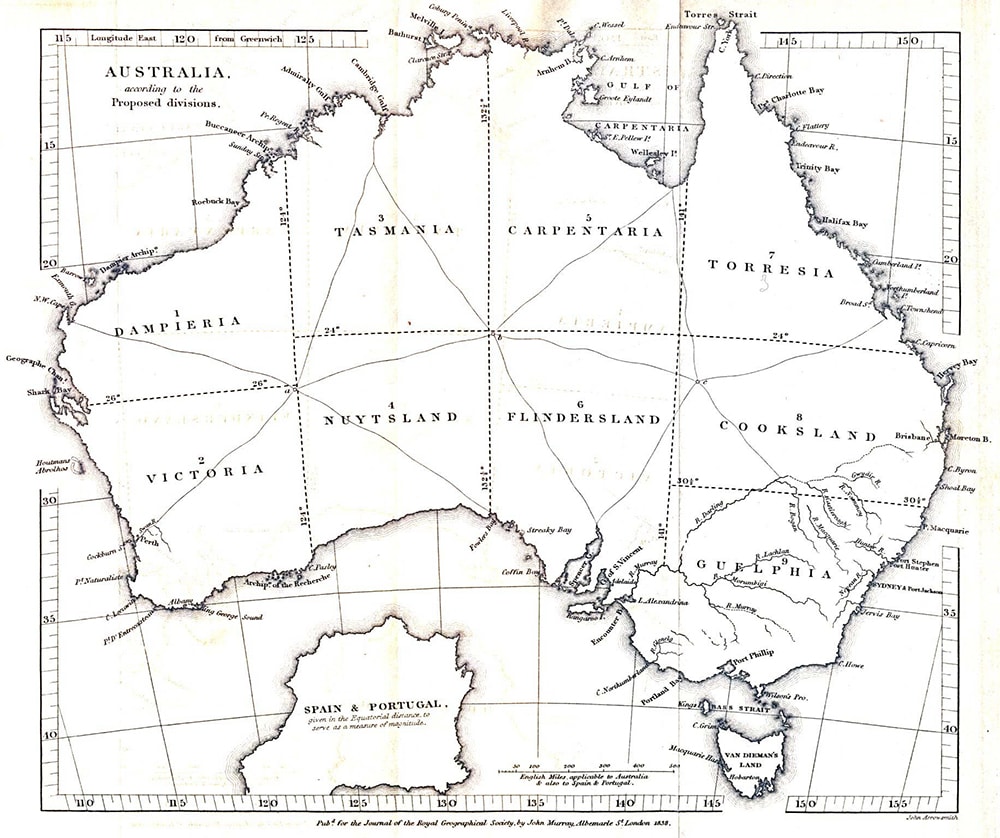 If things had turned out differently, Darwin might have been the capital of Tasmania. And that’s because ‘Tasmania’ wouldn’t have been this gorgeous island at the south of the content, but a modest chunk of what is now the western part of the Northern Territory and the Kimberly and Ord River region of Western Australia. […]

If things had turned out differently, Darwin might have been the capital of Tasmania.

And that’s because ‘Tasmania’ wouldn’t have been this gorgeous island at the south of the content, but a modest chunk of what is now the western part of the Northern Territory and the Kimberly and Ord River region of Western Australia.

The Tasmania we’re referring to is one of ten proposed states on an 1838 proposal to establish Australia with a set of state boundaries that would mean states of roughly equal size. Well, about 9 of similar size and then poor Van Diemen’s Land.

The backstory is that division of the continent went through a long evolution from the definitive start of colonial invasion in 1770.

The eastern half was claimed for Britain as New South Wales, through to 1927, when the Northern Territory was split into North Australia and Central Australia, only to be reunited again in 1931.

During the early days of the colony it was quite common for discussion to take place regarding administrative boundaries.

There were later proposals for New Zealand to become a proper state of Australia, most recently prior to the creation of the Commonwealth in 1901.

READ:  The only country in the world where all eligible residents are fully vaccinated

This map was published in The Journal of the Royal Geographical Society of London in 1838. ‘Tasmania’ and ‘Victoria’ here are obviously unrelated to the modern states with those names.

The plan would have split the continent purely on geometric grounds, and the proposal never came to pass. Shortly afterwards in 1851 Victoria was proclaimed, followed by Queensland in 1859. Van Diemen’s Land was renamed Tasmania in 1856.

Effectively all the states would have had imperial names (see below). Apart from the controversial Cook, many of them might not pass modern muster. Nuyts was disgraced (and fined and imprisoned) even in his own lifetime.

Dampier’s views on Australian indigenous people, well, speak for themselves: “The Inhabitants of this Country are the miserablest People in the World … And setting aside their human Shape, they differ but little from Brutes.” 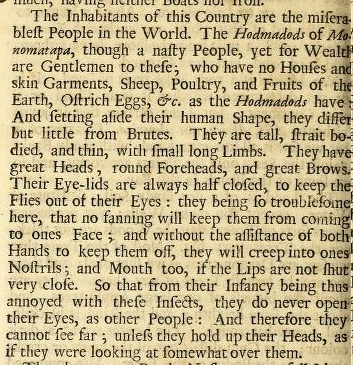 Dampier’s thoughts on Australian indigenous people in ‘A new voyage round the world’.

Dampieria – after English explorer and navigator William Dampier. Parts of what would have been Dampieria are nowadays named after him and his 1699 expedition in the HMS Roebuck.

Victoria – after Queen Victoria, long-reigning monarch of the UK.

Nuytsland – after Dutch seafarer and diplomat Pieter Nuyts. He was part of a landmark expedition of the Dutch East India Company in 1626–27 which mapped the southern coast of Australia…yes, the bits proposed for Nuytsland.

Carpentaria – after Pieter de Carpentier, the Governor-General of the Dutch East Indies at the time Willem Janszoom was conducting European exploration activities in the early 1600s.

Flindersland – after English navigator and cartographer Matthew Flinders who led the second circumnavigation of ‘New Holland’ that he would subsequently call ‘Australia or Terra Australis’ and identified it as a continent.

Torresia – after first recorded European navigator of the Torres Strait, Luís Vaz de Torres, a Spanish maritime explorer. There are no records of Torres ever setting foot in Australia.

Cooksland – after James Cook, a British explorer, navigator, cartographer, and captain in the British Royal Navy. He made three voyages to the Pacific Ocean, during which he achieved the first recorded European contact with the eastern coastline of Australia. “But the other side to the hero story is the dispossession of Australia’s Indigenous peoples from their land,” writes Tracy Ireland, Associate Professor Cultural Heritage, University of Canberra. “As a symbol of the nation, Cook is, and has always been, contested, political and emotional.”

Guelphia – after the name Guelph (through the Italian Guelfo from the Bavarian-Germanic Welf). It is a reference to the House of Welf and chosen to honor King George IV— reigning British monarch 1820-130 whose family, the Hanoverians, descended from the Welfs.

Spain and Portugal are apparently curious additions to the map, but the small print says: “SPAIN & PORTUGAL, given in the Equatorial distance, to serve as a measure of magnitude.”

So there you have it. If you ever find yourself longing for warm, tropical water, just think: they could have been ours.