It is only a matter of time before a cyclist is killed from "dangerous" detours caused by the NSW government dismantling a high-traffic Sydney bike route for construction of the WestConnex motorway, a bicycle advocacy group has warned.

The state's transport agency and the contractor building the motorway are currently removing two pedestrian overpasses and a shared bike and pedestrian path that runs from the intersection at Rozelle onto the Anzac Bridge – a popular route for commuters travelling from Sydney's inner west to the CBD.

Bicycle NSW spokeswoman Bastien Wallace said developers had failed to fulfil a promise that the overpasses would not be removed before a safe alternative was delivered, adding the current detour forces riders onto a dangerous crossing that fails to provide adequate space for commuters. 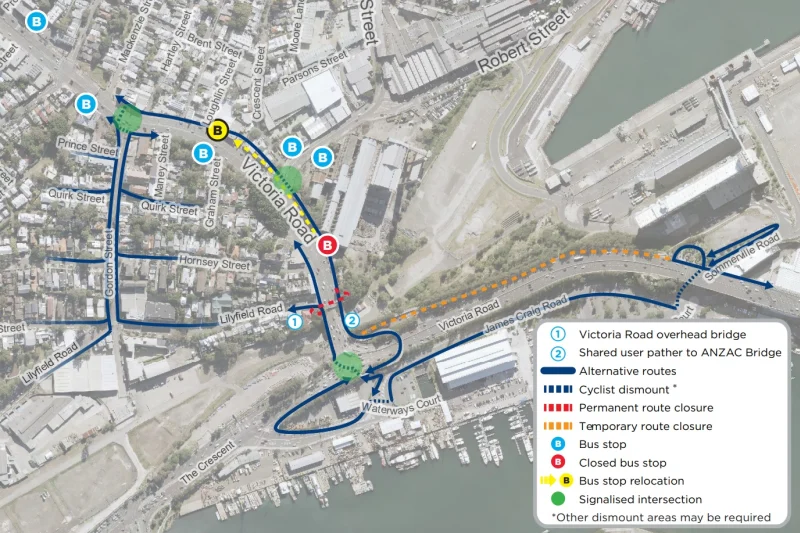 "The multistage crossing offers no space for people to wait as cars speed past – especially for those with prams or wheelchairs," she told nine.com.au.

Ms Wallace said the area is considered one of the state's busiest cycling routes, with more than 100 cyclists using the path each hour during morning and afternoon peak travel times.

She added many of these cyclists would also be forced from Lilyfield Road onto Gordon Street, which is a detour that doesn't have a temporary bike lane in place.

"Gordon Street detour is very steep and difficult, with very little protection for cyclists as cars roar down the road."

Bicycle NSW filmed the problem area for a half hour period and observed many instances of motor vehicles moving too fast and swerving across unbroken double lines.

Ms Wallace said the entry to Gordon Street from Victoria Road is also marked one way, meaning riders heading back from the city would need to break the law or run the gauntlet of motor vehicles when using the detour.

"This detour is deadly and forces people riding bikes to break the law or risk their lives," she said.

"When you measure the distance from the double white lines, there's also not enough room for vehicles to legally pass cyclists.

"On-street parking needs to be suspended in the uphill direction of travel or it's only a matter of time before somebody is killed."

The government's February update for the motorway project, being built by CPB Contractors and John Holland, acknowledged the closures would be a "significant change for pedestrians and cyclists", with the detour adding almost one kilometre to the journey of commuters. 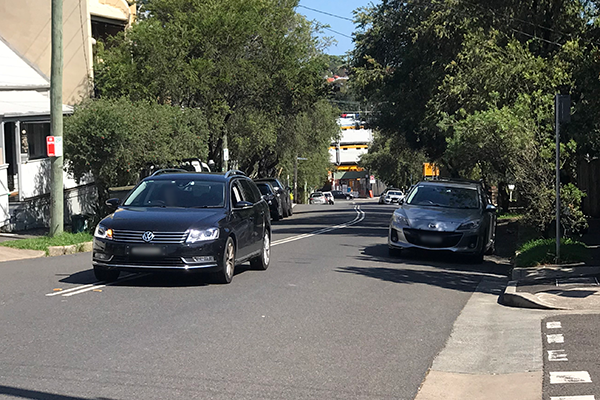 A Transport for NSW spokesman said the chosen detours have been subject to a detailed safety audit, with the routes considered to have the best outcome chosen.

"Active transport links are vital parts of our transport network, and we're working with the community to minimise the impact while this major project is delivered," he told nine.com.au.

"The removal of the Victoria Road overhead bridge is required so work can start towards a new road bridge at the intersection with The Crescent and a new underpass through the future park for pedestrians and cyclists.

"A variety of options were considered, such as a temporary underpass or overpass, and these were assessed against criteria including safety, compliance, available space within the worksite and the potential impact on nearby properties and surrounding roads.

"The chosen detours have been subject to a detailed safety audit, and considered the best outcome."