Authorities around the world turned to increasingly drastic measures Sunday to try to slow the spread of the new coronavirus, with lockdowns, curfews and travel restrictions spreading.Soldiers and police sealed the densely populated Philippine capital … 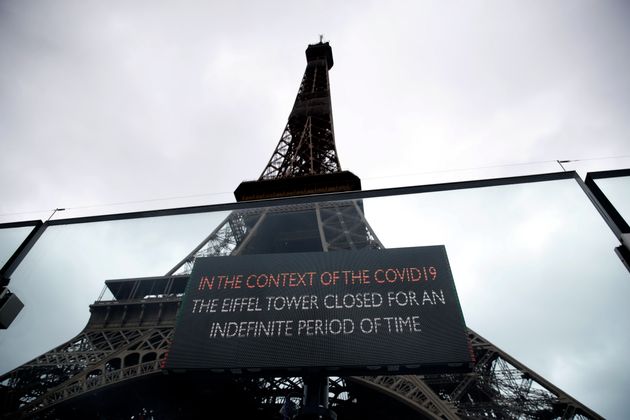 Authorities around the world turned to increasingly drastic measures Sunday to try to slow the spread of the new coronavirus, with lockdowns, curfews and travel restrictions spreading.

Soldiers and police sealed the densely populated Philippine capital from most domestic travellers in one of Southeast Asia’s most drastic containment measures. The move mirrored a lockdown Spain announced just hours earlier for its 46 million citizens.

France ordered the closing of just about everything the rest of the world loves about it — the Eiffel Tower, the Louvre, the cafes and restaurants — as governments took increasingly desperate measures to put more space between people and contain the virus.

In Australia, all overseas arrivals have been asked to self-isolate for 14 days.  Failure to follow the rule could end up with tourists copping a fine up to $50,000. 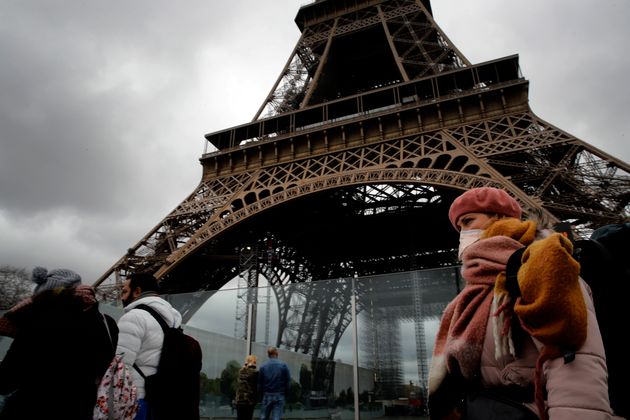 At US airports, travellers returning from Europe were greeted with hourslong waits for required medical screenings. While American citizens, green card holders and some others are allowed to return to the US amid new European travel restrictions, they’re being funnelled to 13 US airports where they’re subject to health screenings and quarantine orders.

Videos and photos posted on social media showed packed, winding lines of returning travellers. On Twitter, airports like Dallas/Fort Worth and Chicago O’Hare acknowledged the delays and asked for patience.

President Donald Trump announced that the US, which days ago barred travellers from most of Europe, will extend the ban to Britain and Ireland. And more cities in the US put in place curbs on gatherings of more than a few hundred people, with one New Jersey city even announcing an overnight curfew. 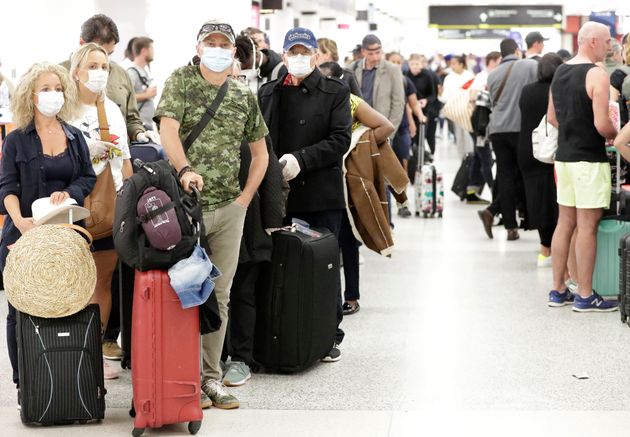 In China, where the virus was first detected in December, those arriving on overseas flights were routed to a converted exhibition center for initial checks before being shuttled off to their homes or other quarantine locations.

It was clear, however, that the center of gravity in the crisis had shifted westward toward Europe and North America. The virus has infected more than 150,000 people worldwide and killed over 5,600.

In a nationally televised address Saturday, Spanish Prime Minister Pedro Sánchez detailed the battery of exceptional measures put in place as part of a two-week state of emergency to fight the sharp rise in infections.

Later Saturday, Spain’s government said Sánchez’s wife had tested positive for the coronavirus. Begoña Gómez and the prime minister are in good health, the government said.

In a lockdown similar to the one already imposed in Italy, people will be allowed to leave their homes only to buy food and medicine, commute to work, go to hospitals and banks, or take trips related to the care of the young and the elderly. All schools and universities were closed, along with restaurants, bars, hotels and other nonessential retail businesses.

“From now we enter into a new phase,” Sánchez said after a Cabinet meeting that lasted over seven hours. “We won’t hesitate in doing what we must to beat the virus. We are putting health first.” 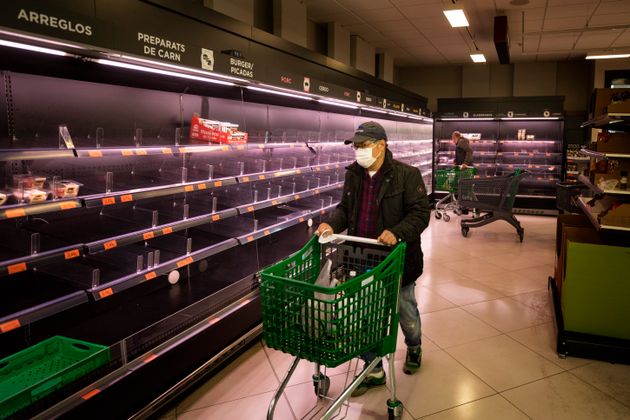 Spanish authorities said the number of infections climbed past 5,700, half of them in the capital, Madrid. That represents a national increase of over 1,500 in 24 hours. The country had 136 deaths, up from 120. Spain has the fifth-highest number of cases, behind China, Italy, Iran and South Korea.

For most people, the coronavirus causes only mild or moderate symptoms, such as fever and cough. For some, especially older adults and people with existing health problems, it can cause more severe illness, including pneumonia. The vast majority of people recover in a matter of weeks.

Despite pleas for calm from authorities, shoppers packed supermarkets in Spain in the morning. But overall, the normally bustling streets of the country’s two biggest cities were noticeably quieter as the message sank in that social distancing is the only way to stop the pandemic.

“We had to close and remain shut for 15 days,” restaurant owner Rachel Paparardo said in Barcelona, which was already under regional restrictions. “But this is nothing. It is just so more people don’t get infected and we can recover from this.”

In the Philippines, new restrictions for metropolitan Manila — home to more than 12 million people — that went into effect Sunday mean the suspension of domestic travel by land, air and sea to and from the capital region, as well as an overnight curfew.

Large gatherings are prohibited and most government work in executive department offices will be suspended in the metropolis for a month. School closures at all levels were extended in the Philippines, which has confirmed 140 cases of the virus, including 11 deaths. 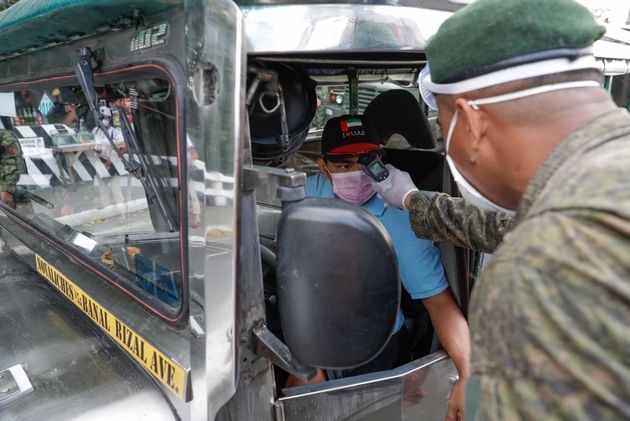 In the Middle East, Muslim authorities announced that Jerusalem’s Al-Aqsa mosque, Islam’s third-holiest site, would be closed indefinitely due to concerns about the outbreak, with prayers continuing to be held on the sprawling esplanade outside.

Israeli Prime Minister Benjamin Netanyahu’s trial on serious corruption charges, which was supposed to begin this week, was postponed for two months due to restrictions on public gatherings.

Paris followed other cities in shuttering major tourist attractions, and France announced the closing of all restaurants, cafes, theaters and nonessential shops starting Sunday. France has recorded at least 3,600 infections. It has banned all gatherings of more than 100 people, ordered all schools closed and asked companies to allow workers to stay home.

France pressed ahead with nationwide municipal elections on Sunday but ordered special measures to keep people at a safe distance and to sanitize surfaces.

In Italy, the worst-hit European country, the number of deaths climbed past 1,400 and infections surged roughly 20% overnight to more than 21,000 because of what authorities characterised as irresponsible behaviour by people still socialising despite the nationwide lockdown. Many Italian cities, including Rome and Milan, decided to close playgrounds and parks, too. 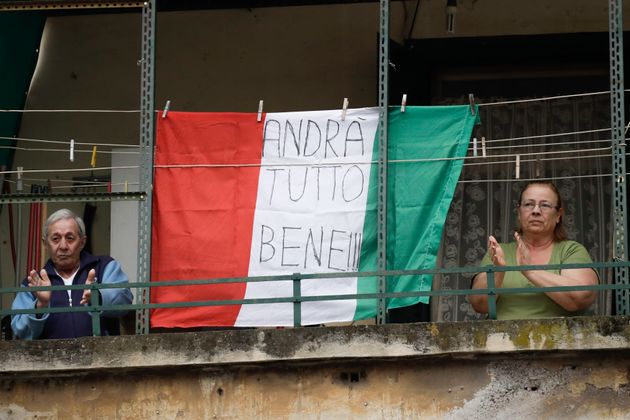 In Britain, the death toll nearly doubled from the day before to 21, and the number of people infected rose to over 1,100. Ireland had 90 confirmed cases and one death as of Friday. Greece’s infection total approached 230 with three deaths, and police there arrested 45 shopkeepers Saturday for violating a ban on operations.

The US has seen 60 deaths and more than 2,100 cases. In hard-hit Washington state, where 40 have died and and more than 550 have been infected, officials said the disease is straining the supply of protective gear available to medical providers despite shipments from the federal government.

European countries took steps to isolate themselves from their neighbours.

Denmark closed its borders and halted passenger traffic to and from the country. Poland planned to close is borders at midnight and deny all foreigners entry unless they lived in Poland or had personal ties there. The Czech Republic and Slovakia took similar action.

Russia said its borders with Norway and Poland will be closed to most foreigners beginning Sunday.

In New Zealand, passengers aboard a cruise ship in the South Island tourist town of Akaroa were not being allowed off the vessel Sunday while three passengers are tested for the new coronavirus.

Director-General of Health Ashley Bloomfield said that one of the passengers on the Golden Princess is being treated as a suspected case because that person has developed symptoms of the disease and is a close contact of another person who has been confirmed as having contracted COVID-19.

Bloomfield said they should get the test results on Monday, and that officials are considering their response should the case be confirmed.

He says one lesson from observing problems with the virus spreading on other cruise ships is to avoid leaving everybody on board. Bloomfield didn’t elaborate on what form any response might take.

The Associated Press receives support for health and science coverage from the Howard Hughes Medical Institute’s Department of Science Education. The AP is solely responsible for all content.