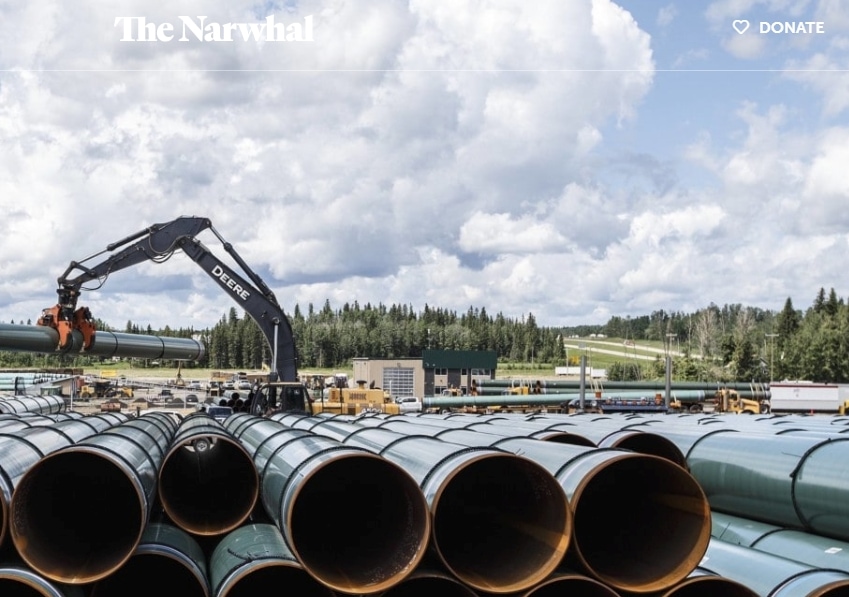 Tasmanian Times is interested in exploring different perspectives on what modern journalism can be. Solutions Journalism have kindly given us permission to republish this article on environmental journalism outlet The Narwhal. TN, they discovered, isn’t shying away from complex stories on polarising issues. And audiences are rewarding them. Could their approach be useful for us […]

The post Complicating the Narrative appeared first on Tasmanian Times.

Tasmanian Times is interested in exploring different perspectives on what modern journalism can be.
Solutions Journalism have kindly given us permission to republish this article on environmental journalism outlet The Narwhal. TN, they discovered, isn’t shying away from complex stories on polarising issues. And audiences are rewarding them. Could their approach be useful for us in Tasmania where, like many other places, we have long-term issues that are divisive and apparently insoluble?

Canada recently faced a polarising election. In particular, a growing push to tackle climate change met massive resistance in many communities long reliant on oil and gas, as well as voters concerned about the economic impacts of transitioning away from fossil fuels. Nowhere is this opposition more fervent than Alberta, a largely conservative province in Western Canada overwhelmingly reliant on oil and gas revenue.

The Narwhal, an independent environmental news organisation based in British Columbia, wanted to dig in to the impacts of potential solutions the government has implemented (or considered) to ease the energy transition. Seeing the U.S. media as “a cautionary tale” about stoking conflict, they embraced Complicating the Narratives, a reporting approach rooted in conflict resolution techniques.

In Alberta, they didn’t find a province of climate deniers. They found people with complex views about the environment, deeply concerned both about the planet and their towns’ potentially incompatible futures. The Narwhal’s stories are rich, nuanced, and award-winning, and they’ve been rewarded with passionate readers, viewers, and listeners supporting their work.

Every month, the Solutions Journalism Network selects a Solutionist — a journalist or outlet doing (or supporting) excellent solutions-focused reporting. (We used to call it Member of the Month.) This month, SJ’s Allen Arthur spoke with The Narwhal’s editor-in-chief Emma Gilchrist and reporter Sharon J. Riley about how Complicating the Narratives gave them a framework for a different style of reporting, and why people are so willing to pay for complexity when the industry seems to believe otherwise.

Allen Arthur: Tell me about how The Narwhal got started and what was missing where you said, “We’re going to step in and fill this.”

READ:  Queensland restrictions lifting at 6am tomorrow despite death

We really wanted to create a new model for journalism too. Reader funding and nonprofit journalism are really quite rare in Canada. Basically the field is pretty wide open to do in-depth, complex, investigative journalism on environmental issues in Canada. The timing couldn’t be more ripe. The level of the environmental crisis we’re seeing combined with the discussions on how to take action on climate change are the most divisive issue in Canada. So that’s why we’re so enchanted with the Solutions Journalism Network’s work, especially around ‘Complicating the Narrative.’

AA: In the U.S., we’re struggling with how we fund this. A lot of times, when it comes to really complex stories, people say, “Readers don’t want to dig into that.” So what’s your strategy for funding and growing The Narwhal and helping people feel they’re contributing to something that has value to them?

EG: That question’s a complicated one, but we’ve really put an emphasis on reader donations and monthly memberships. Reader revenue became the single largest source of revenue this last fiscal year. In terms of how we do that, our readers are the lifeblood. They send us story ideas, they give us pats on the back, and they donate to us. They share our stories. I think it’s really just being oriented to what people are experiencing on the ground, and one of the things people are experiencing most is this huge tension and conflict around how to take action on climate change while we have an economy that’s incredibly reliant on oil and gas in certain parts of the country. So I think coverage that recognises that tension resonates with people, and it’s also surprising and helps us not to be pigeonholed as just a publication environmentalists would read.

Sharon J. Riley: There are a lot of people who work in the oil and gas sector in Alberta, and even more who know someone who did or does or whose family does. My dad worked on the oil sands when I was a kid. And I think Albertans in particular are maybe getting increasingly tired of reading the news or reading stories and seeing oil and gas always pitted against the environment as though there are two totally separate camps and there’s no nuance between them.

One thing I’ve come across a lot in my reporting, this is very common in Alberta, people will say, “I support oil and gas, but …” and the “but” to me is what’s interesting, and it’s a gateway to a much more nuanced conversation. When you ask whether there’s an appetite for these complicated stories, I think there is. Albertans and maybe a lot of audiences are getting tired of not seeing themselves wholly represented in media coverage.

SR: Right before I started working on my story that became ‘Life After Coal’ I was having a lot of conversations with Emma about how to cover the coal transition. She had just come back from a New York training from SJN and emailed me the 22 questions to complicate the narrative, and I thought that was so useful in talking to people and knocking them off the script that we hear so often. I think often people have a certain line they’ve heard many, many times in the media. So when I ask the question they’ll give me that line. This idea of Complicating the Narratives has helped me to really drill down into those responses and get to why people feel that way. It brings so much more truthful responses than, “What do you think?” and “Who are you mad at?”

AA: As people are thinking about engagement more and what that means, this idea that journalists are just there to “report the facts” from this dispassionate view-from-nowhere is, especially among younger generations, starting to fade away. People are wrestling with, “So what makes a journalist a journalist?” With this work as the backdrop, what do you see as your role as the journalist? Do you see yourselves as doing something fundamentally different?

EG: I fundamentally don’t believe that journalists are just these objective conveyors of the facts. Every editor is making judgement calls about what stories they’re assigning, what sources are going to be interviewed. I think when people make that argument, they’re kind of just making an argument for the status quo, and that type of journalism just amplifies political talking points and demagoguery essentially. I definitely see our role as journalists is to cut through the spin, help people make sense of the world, to get at what’s actually going on and what the root causes — and therefore solutions — are to the big problems we’re facing. I see that all kind of fitting into the realm of a journalist. It’s just maybe a bit of a more contemporary view of what a journalist is.

READ:  The European destination reopening to tourists as early as July 1

AA: Have you gotten any responses from people who have been in these Complicating the Narrative-style pieces?

SR: The feedback that sticks out to me the most is not actually someone who was in a story that I wrote. But a story I wrote about the difficulties of talking about an energy transition in towns that are almost entirely reliant on oil and gas, I got quite a bit of feedback from people who lived and worked in those sorts of towns, or currently do, about how important it is to try to fully capture why a person might seem resistant when it involves an entire paradigm shift. I was glad to hear I had — at least in their opinion — captured it.

EG: We get a lot of comments from people as they sign up to donate or become monthly members, and actually just in the last couple days we’ve had a couple comments from new members that have indicated they really appreciate the more complex journalism. One of them said, “Keep up the fabulous work. Please maintain the bridge building, honesty, and transparent reporting and avoid the temptation of division creating.” We had another one that said, “We need all of our news to focus on stories that diversify the voices through which we learn about the world, eliminate the root systemic causes of the challenges we face, and ultimately focus on solutions and possibilities. Keep up the excellent work.” So we definitely see that feedback from readers and new donors that they’re noticing the focus on solutions and featuring new voices.

Allen Arthur is a journalism student. He is interested in incarceration, community empowerment, homelessness, corruption, hip hop, and capitalism. You know, the basics. You can also find him on Twitter.

The post Complicating the Narrative appeared first on Tasmanian Times.