The protesters set off flares and used superglue to stick themselvse to the road as they brandished signs with slogans such as “Glued on for my grandkids”.

Six Extinction Rebellion protesters have been charged after they glued themselves to the middle of Flinders Street and a nearby building during this morning's peak hour in Adelaide.

The protesters set off flares and used superglue to stick themselvse to the road as they brandished signs with slogans such as "Glued on for my grandkids".

A section of Flinders Street between Gawler Place and Wyatt Street had to be closed and authorities redirected traffic for several hours.

Two of the protestors climbed the office building of oil and gas company Santos before setting off flares and spray painting messages. They then glued themselves to the building.

The duo - a 32-year-old Paradise woman and a 64-year-old Flagstaff Hill man - have been charged with being unlawfully on the premises, property damage and disturbing the peace.

Police and firefighters needed the help of a cherry picker to reach the protesters on the Santos building.

The four women who glued themselves across the intersection of Flinders Street and Gawler Place - aged 70, 38 and two aged 65 - were charged with loitering.

Officers used syringes believed to be filled with acetate - an active ingredient in nail polish remover - to un-glue the protesters' hands.

They were then taken from the scene in police vans. 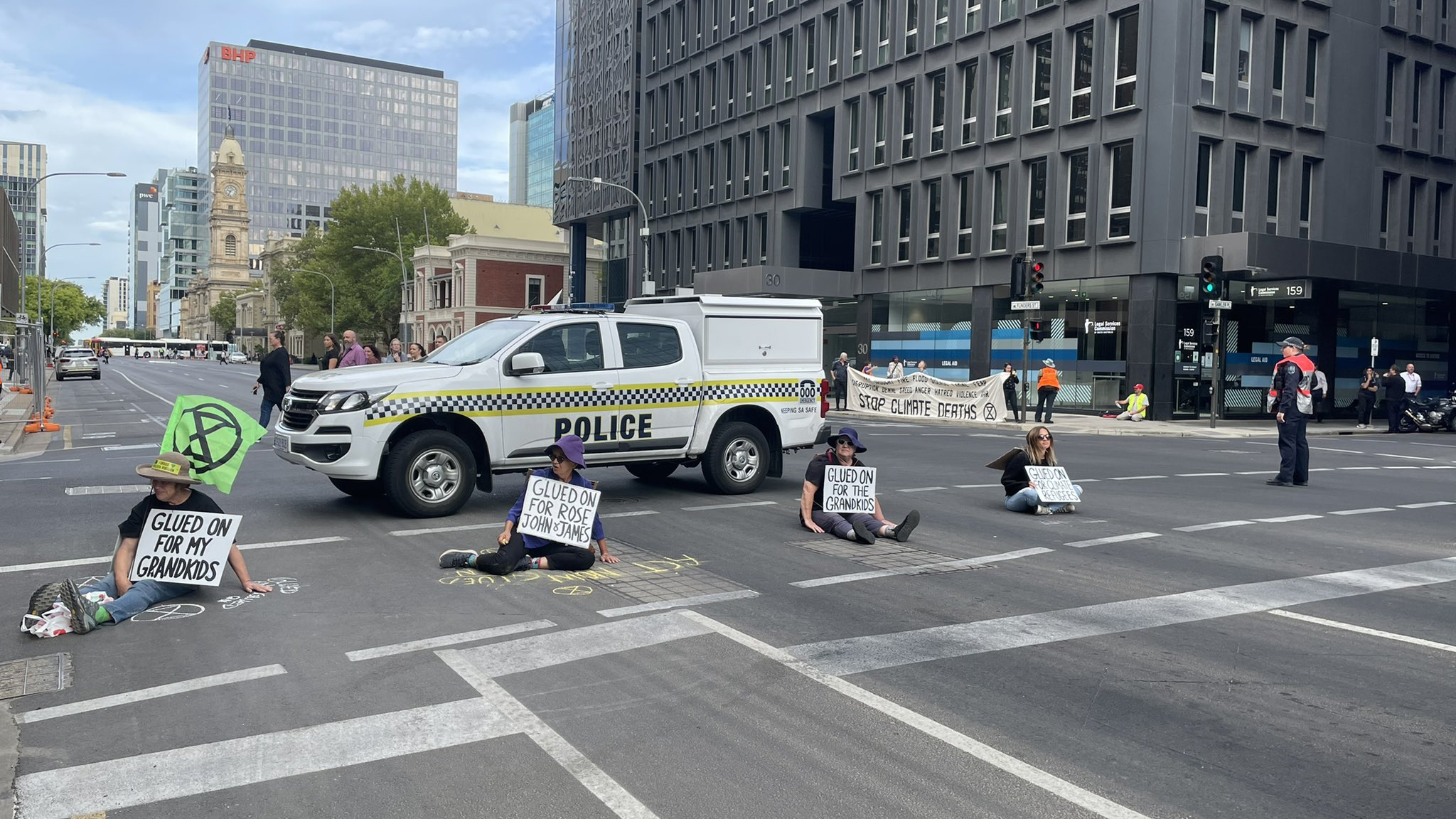 Extinction Rebellion said it was protesting against Santos' fracking projects and called for the company to invest more in renewable energy.

"The rebels taking part include parents and grandparents. They are ordinary people, deeply afraid for the future of their children and grandchildren in the looming climate catastrophe," the group wrote on Facebook.

"Pressure is mounting on the Australian Government to cut emissions to net-zero by 2050.

"However, most scientists, many Australians and Extinction Rebellion know this is too late.

"We need drastic cuts to net-zero emissions by 2025 if we are to avoid climate disaster.

"We are rebelling for a safe future."

The Paradise woman was bailed to appear at a later date, while the man did not apply for bail and is expected to face the AMC today.