When it comes to keeping COVID-19 at bay, few countries seem willing to go as far as China.

When it comes to keeping COVID-19 at bay, few countries seem willing to go as far as China.

As countries around the world reopen borders and loosen coronavirus restrictions, Beijing is doubling down on its zero-COVID strategy.

The latest example: a US$260 million, 5,000-room quarantine facility for incoming travellers set to open in the southern metropolis of Guangzhou in the coming days. 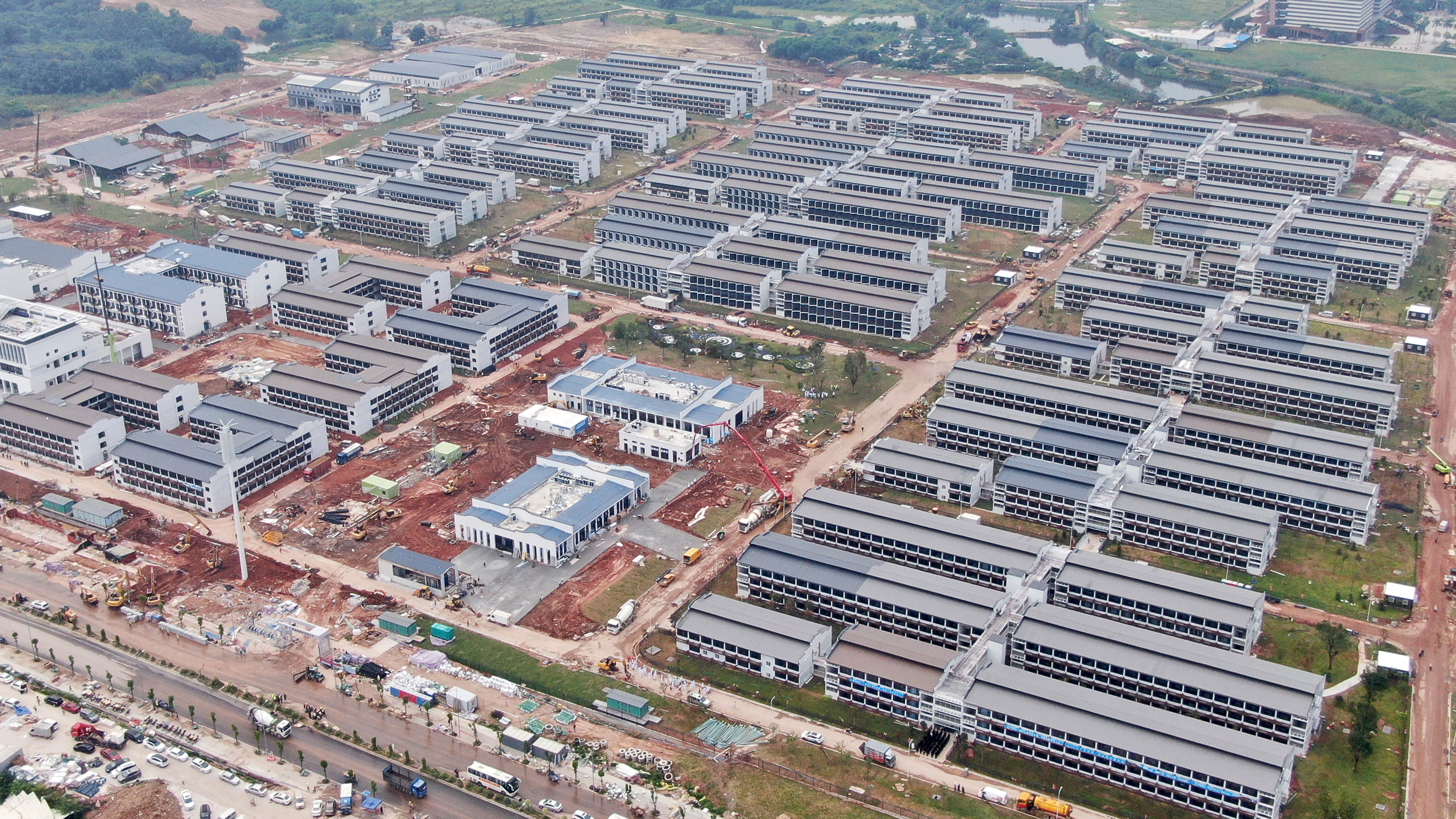 Comprised of rows of three-story buildings topped with gray roofs in traditional Chinese style, the massive complex spans an area the size of 46 football fields and took less than three months to be built from scratch on the outskirts of the city.

It will replace designated hotels located throughout Guangzhou to quarantine Chinese and international travellers arriving from overseas - a move aimed at reducing residents' exposure to imported cases.

Travellers will be transferred on buses directly from the airport, and confined to their rooms for at least two weeks.

Each room is fitted with a video chat camera and an artificial intelligence-powered thermometer, with three meals a day delivered by robots - all designed to minimise direct contact with staff members. 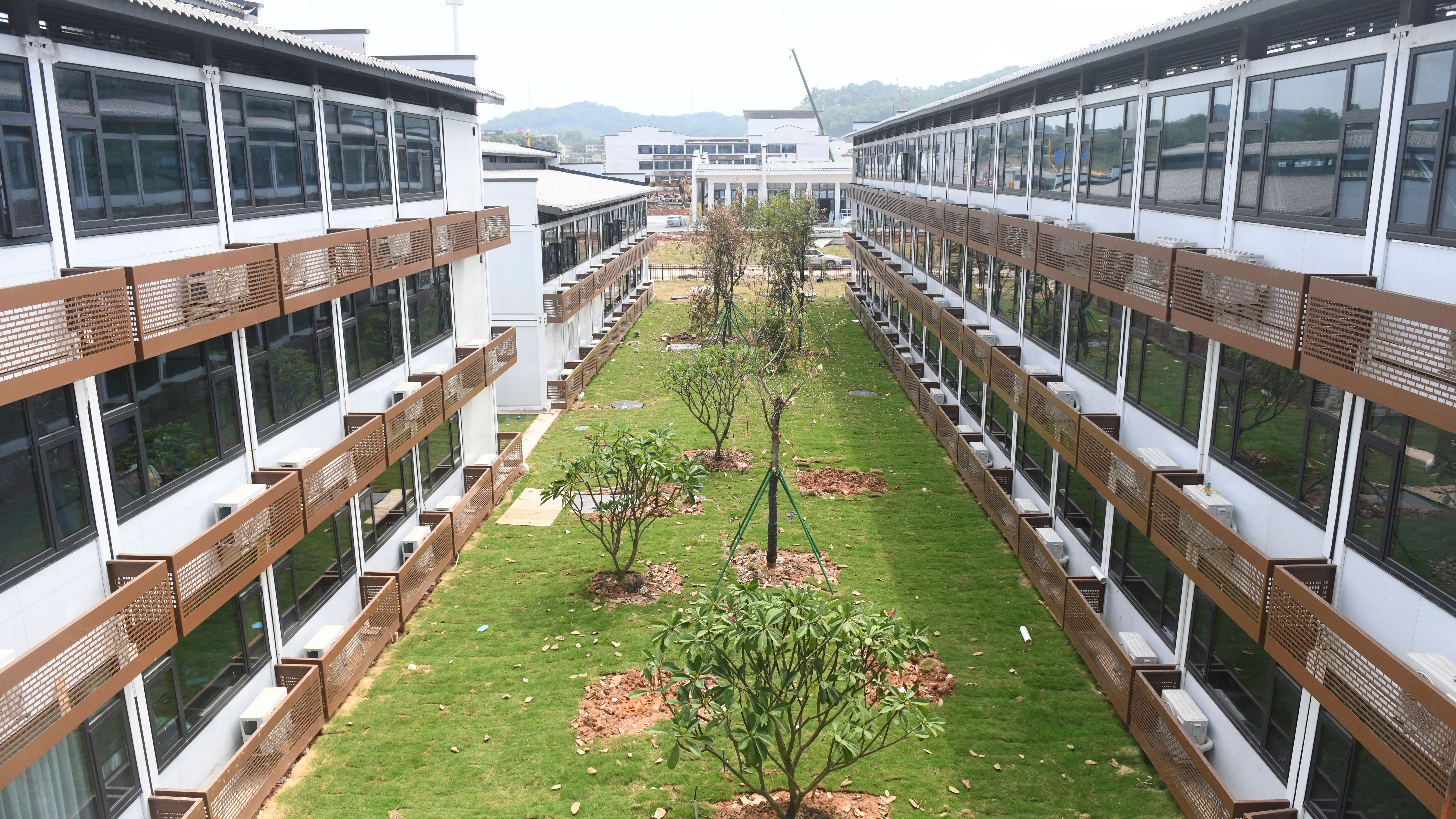 "It's arguably the most state-of-the-art quarantine centre in the world, if you will -- very high tech, very sophisticated," said Yanzhong Huang, a senior fellow for global health at the Council on Foreign Relations.

The Guangzhou International Health Station - as it's officially named - is the first of its kind in China.

But experts say it could be the first of many as the Chinese government intensifies its uncompromising, zero-tolerance strategy toward the coronavirus.

Already, the manufacturing hub of Dongguan, about an hour's drive from Guangzhou, is building its own "international health station" with 2,000 rooms.

Further south, the technology hub of Shenzhen is also planning for such a facility.

"This is not just a stopgap measure. (Chinese leaders) hold the view that this pandemic is going to take a while to end, and China is going to continue this strict control of its borders," Huang said.

"Facilities like this serve as a way to institutionalise the zero-tolerance strategy."

For more than 18 months, China has closed its borders to most foreigners.

Those few who are allowed to enter, as well as returning Chinese citizens, are required to undergo at least two weeks of mandatory hotel quarantine, followed by at least another week of centralised quarantine or home isolation - including those who are fully vaccinated. But the virus has repeatedly breached China's defences.

In May, the highly infectious Delta variant caused an outbreak in the southern province of Guangdong, including in Guangzhou and Shenzhen.

At that time, Guangdong was receiving 90 percent of all overseas travellers entering China, with about 30,000 people quarantined in its 300 centralised facilities on a daily basis, according to a provincial health official.

By late June, Guangdong had contained the outbreak - but authorities decided existing measures were not enough to shut the virus out.

Zhong Nanshan, a top public health adviser to the government, told state media that Guangzhou would build a centralised quarantine facility for all overseas arrivals to enforce stricter rules.

The project kicked off quickly, with more than 4,000 workers assigned to the construction site.

The facility was completed earlier this month and a first batch of 184 medical staff moved in last week to prepare for its official launch.

They face a tough job ahead. The complex is designed as a bubble to be isolated from the rest of the city - meaning not only travellers, but also workers will be placed under effective lockdown.

Medical staff will work for 28 days at the facility, go through a week of quarantine themselves, and another two weeks of home quarantine before they're allowed to go outside, an official told the Guangzhou Daily newspaper.

China's move to tighten quarantine measures for overseas arrivals comes as a growing list of countries open up.

Last week, the United States announced it would ease travel restrictions on all fully vaccinated foreign visitors starting in November. 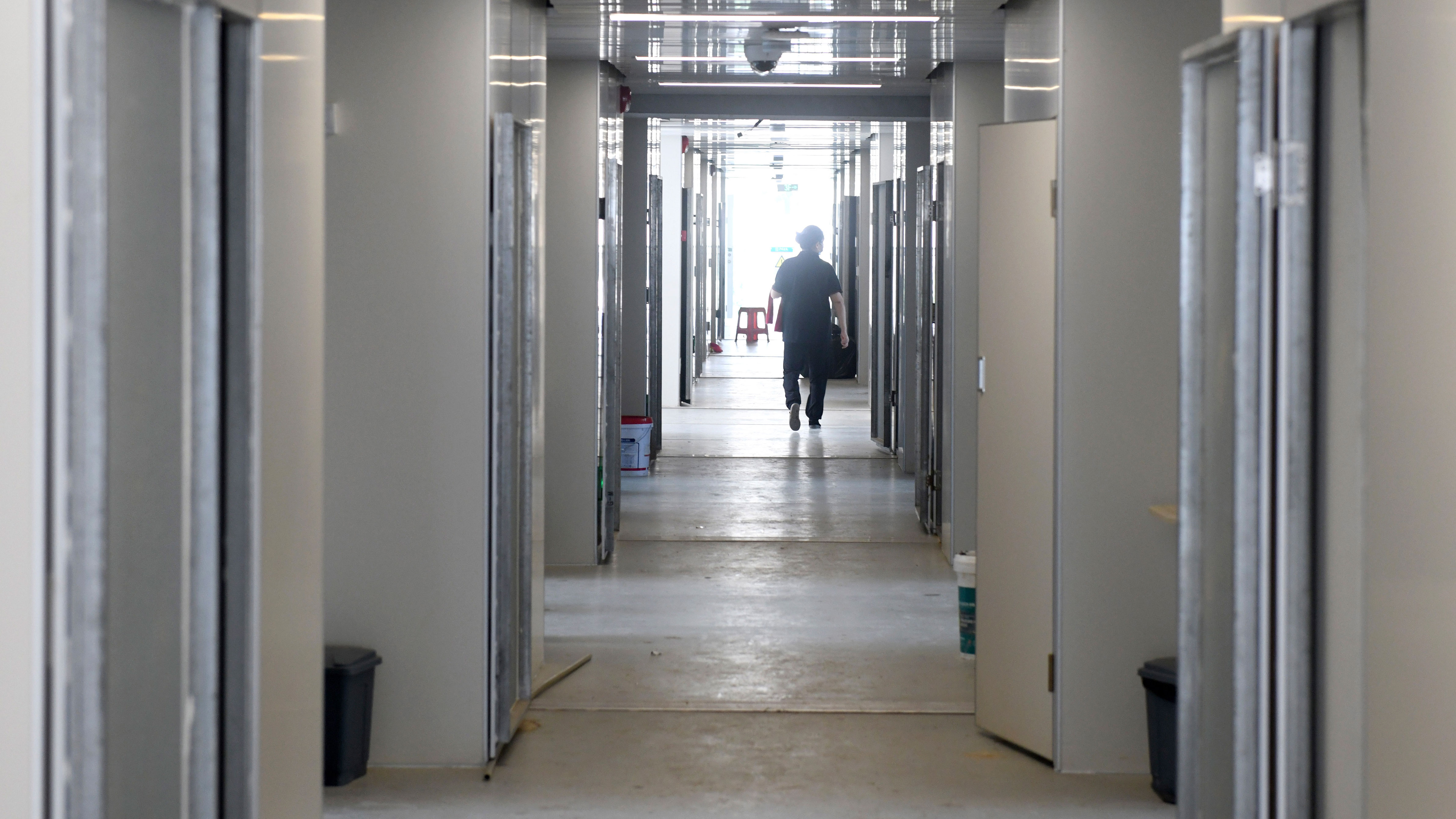 But on Chinese social media, calls are growing for authorities to lengthen quarantine for overseas arrivals. Many blamed Chinese travellers returning from abroad for bringing the virus to China, especially following the latest outbreak in the southern province of Fujian.

Initially, experts advising the government identified a man who returned from Singapore more than a month ago as the likely source of the outbreak, despite him having completed 21 days of quarantine on arrival, during which he tested negative for the virus a total of nine times.

The average incubation period for the Delta variant is about four days.

Later, health experts walked back that theory, saying the man was likely to have picked up the virus during centralised quarantine instead.

But the clarification did little to calm online calls for tougher quarantine requirements.

China's move toward stricter quarantine comes despite the country making huge strides in its vaccination drive.

Earlier this month, officials announced that one billion people had been fully inoculated with domestically made vaccines, accounting for 71 per cent of China's 1.4 billion population - a rate higher than many countries that have opened their borders. 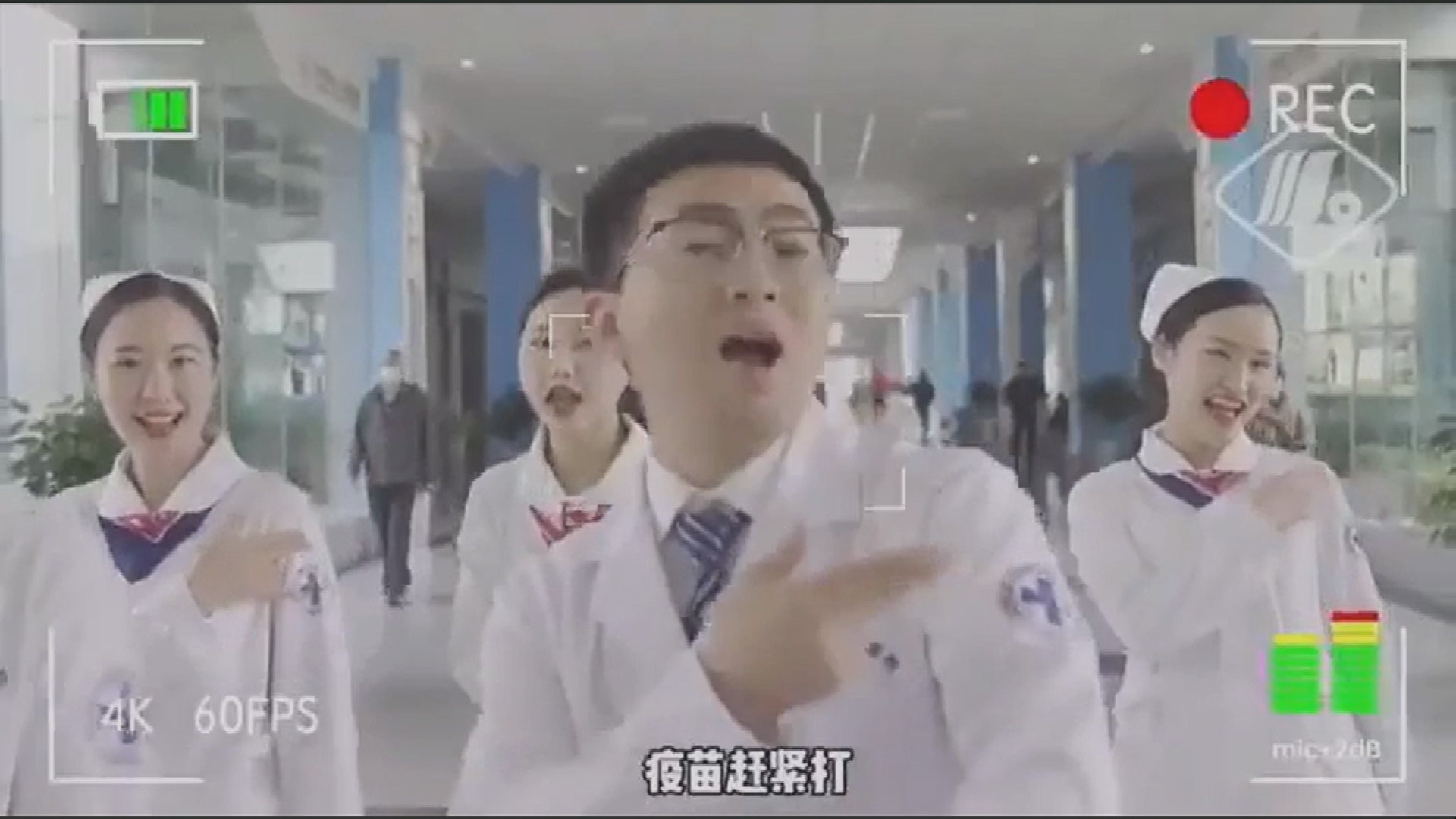 Guangzhou's new quarantine facility will open just in time for the China Import and Export fair, which begins October 15.

The biannual event, also known as the Canton Fair, is China's largest trade exposition, typically attracting tens of thousands of companies from around the world.

Having been held online so far during the pandemic, next month marks a real-world return for the trade fair - but attendance will be limited to exporters and buyers already based in China.

Nevertheless, authorities in Guangzhou have stepped up quarantine requirements for all overseas arrivals, raising their mandatory quarantine from 14 days to 21 days.

Huang, the expert at the Council on Foreign Relations, says despite its enormous size, the facility would likely not be big enough to hold all foreign arrivals.

"Just think about it. One international flight typically carries 300 people. They all need to be quarantined and stay at least 21 days. It's going to fill up quickly," he said.