Crews were battling wildfires in the San Francisco Bay Area and thousands of people were under orders to evacuate on Wednesday as hundreds of wildfires blazed across the state amid a blistering heat wave now in its second week.

Crews were battling wildfires in the San Francisco Bay Area and thousands of people were under orders to evacuate on Wednesday as hundreds of wildfires blazed across the state amid a blistering heat wave now in its second week.

Governor Gavin Newsom blamed "this extraordinary weather we're experiencing and all of these lightning strikes" for 367 known fires, including 23 major fires or groups of fires. He said the state has recorded nearly 11,000 lightning strikes in 72 hours. 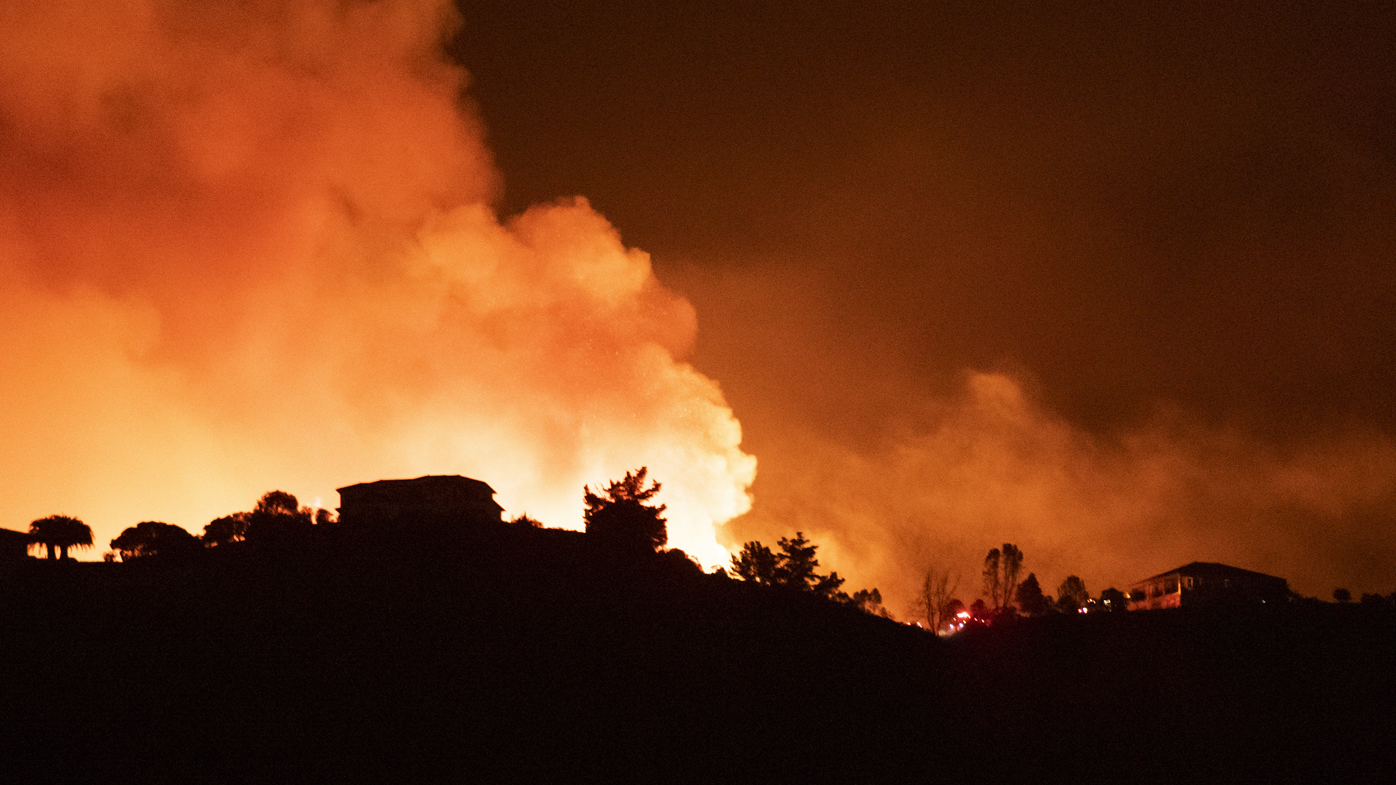 Police and firefighters went door-to-door before dawn on Wednesday in a frantic scramble to warn residents to evacuate as fire encroached on Vacaville, a city of about 100,000 between San Francisco and Sacramento. At least 50 structures were destroyed, including some homes, and 50 damaged.

"This is an incredibly emotional and stressful time for most of us who've endured a number of wildfires over the last few years," said Sonoma County Sheriff Mark Essick. 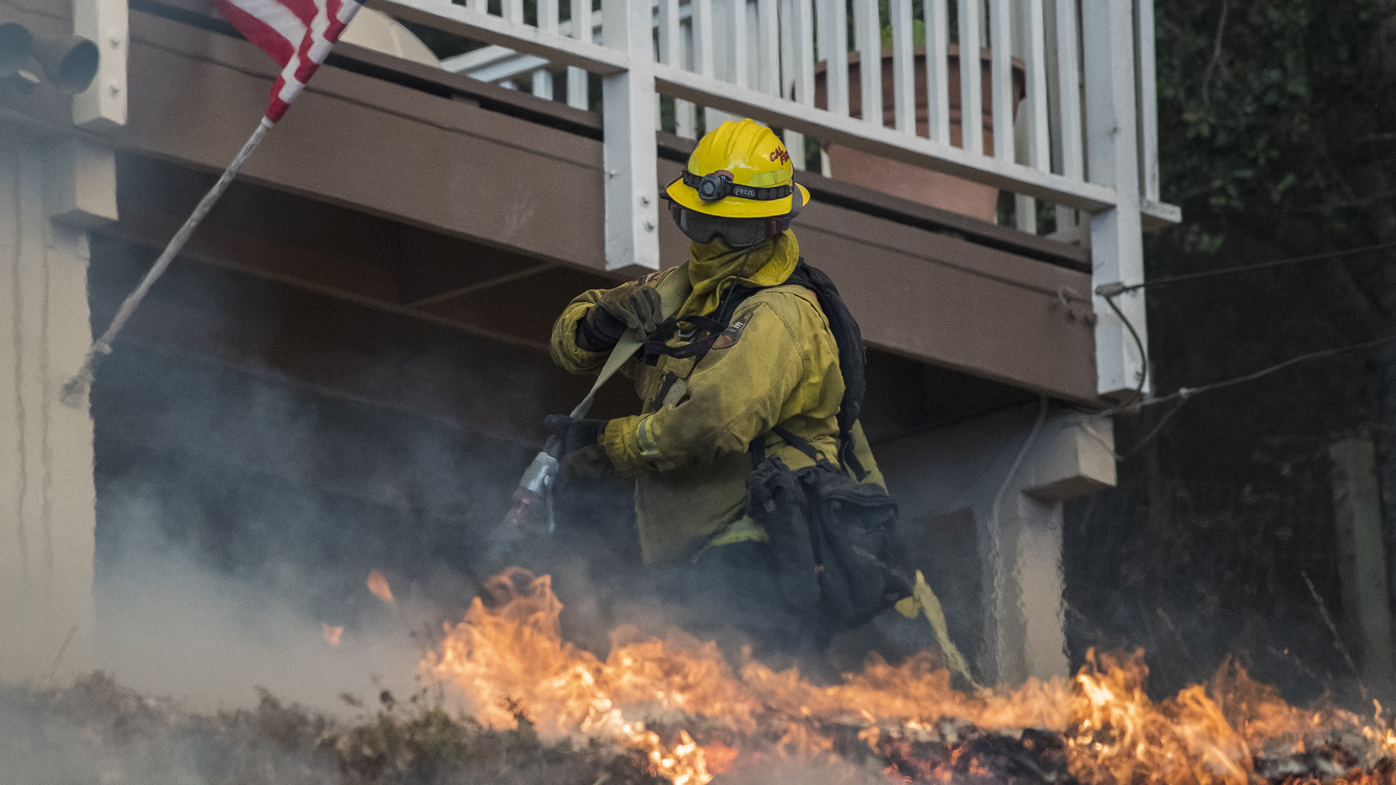 John Gardiner, 60, stayed up all night after receiving an alert from a neighbour of oncoming fire around just before midnight. His house and neighbours' homes were still safe, but he worried that could change as crews anticipate hot winds Wednesday afternoon.

"It was incredible, things swirling, winds just whipping through like a howling ripping sound and then you could hear explosions going off," he said. "You can taste smoke in your mouth."

Victoria Gregorich, 54, said her family loaded up the car and left their Vacaville home after deputies rang the gate around 12:30am to tell them to evacuate. The fire destroyed her greenhouse, but the house was spared. 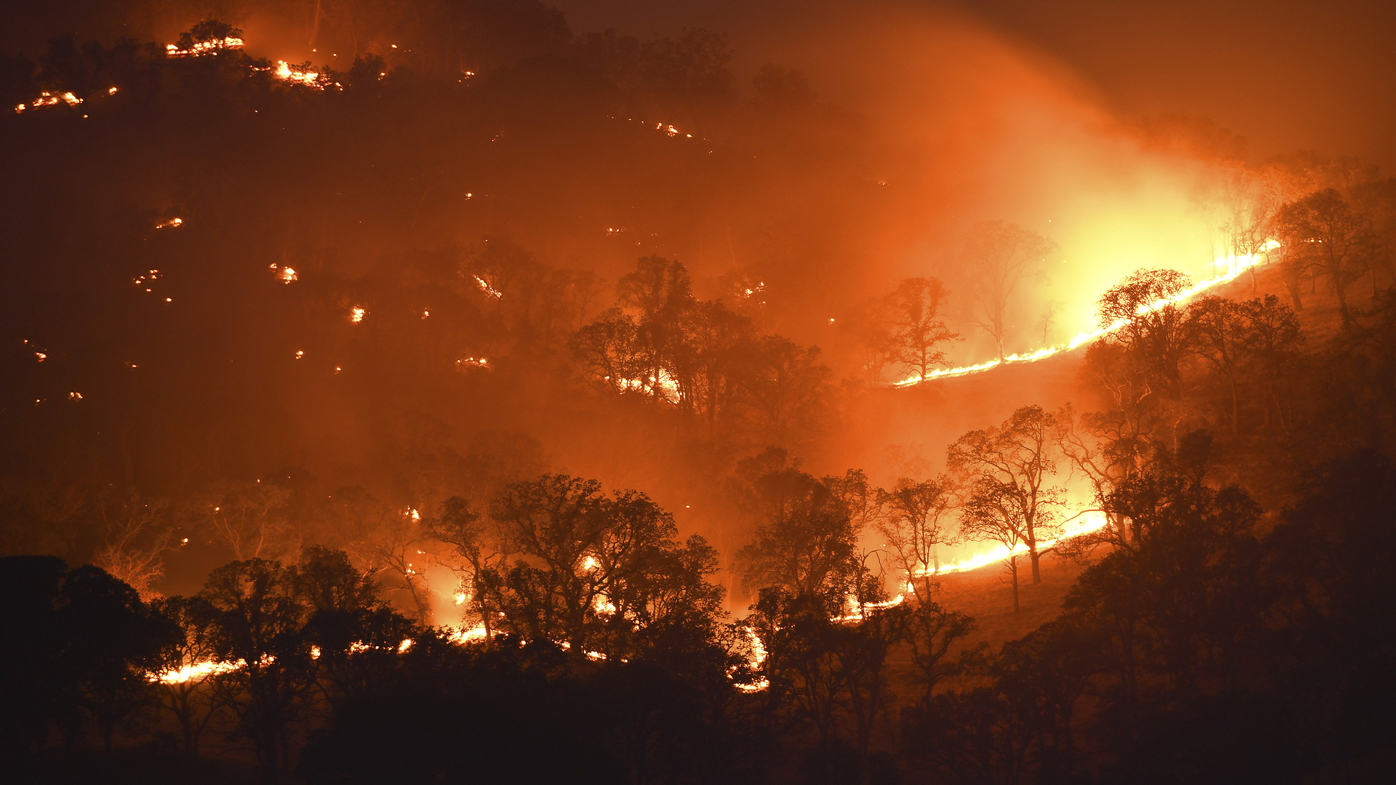 Her neighbours were not so lucky.

"It's devastating," she said. "I just thank God we have our home."

Elvis Castaneda, 28, and his father Silverio spent the night moving ranching equipment to a safer location, removing vegetation and making firebreaks with their tractor around the properties of friends.

"We couldn't see the flames but the sky was pretty orange, and we knew it was coming our way," Elvis Castaneda said.

He said he drove home at 3am and started packing legal documents, photos, passports and his firearms after hearing that his girlfriend's family, who live in a ranch three kilometres away, were told to evacuate and move all their farm animals to safety. 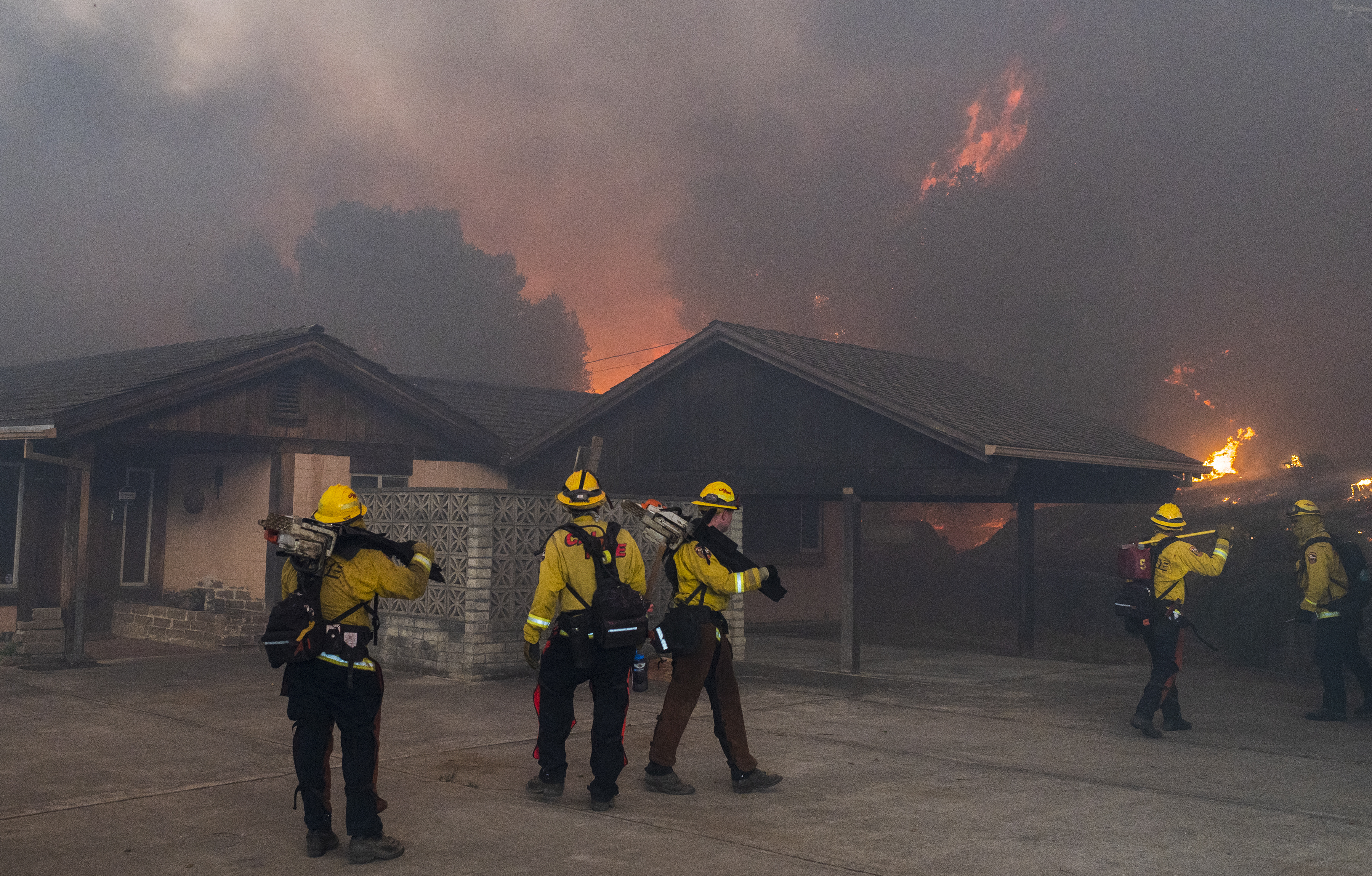 He got the order to leave after dawn Wednesday.

In the East San Francisco Bay, a cluster of 20 separate lightning-sparked fires called the SCU Lightning complex was threatening about 1400 structures in rugged terrain with dense brush. The fires have torched 344 square kilometres.

To the south of San Francisco in San Mateo and Santa Cruz counties, about 22,000 people were ordered to evacuate because of a fire burning in dense wooded parkland that threatened communities, California Fire spokesman Jonathan Cox said.

About 22 fires are part of the complex and most had been burning in relatively remote, dense brush until strong winds overnight Tuesday pushed them into more populated areas, merging some of the fires together. 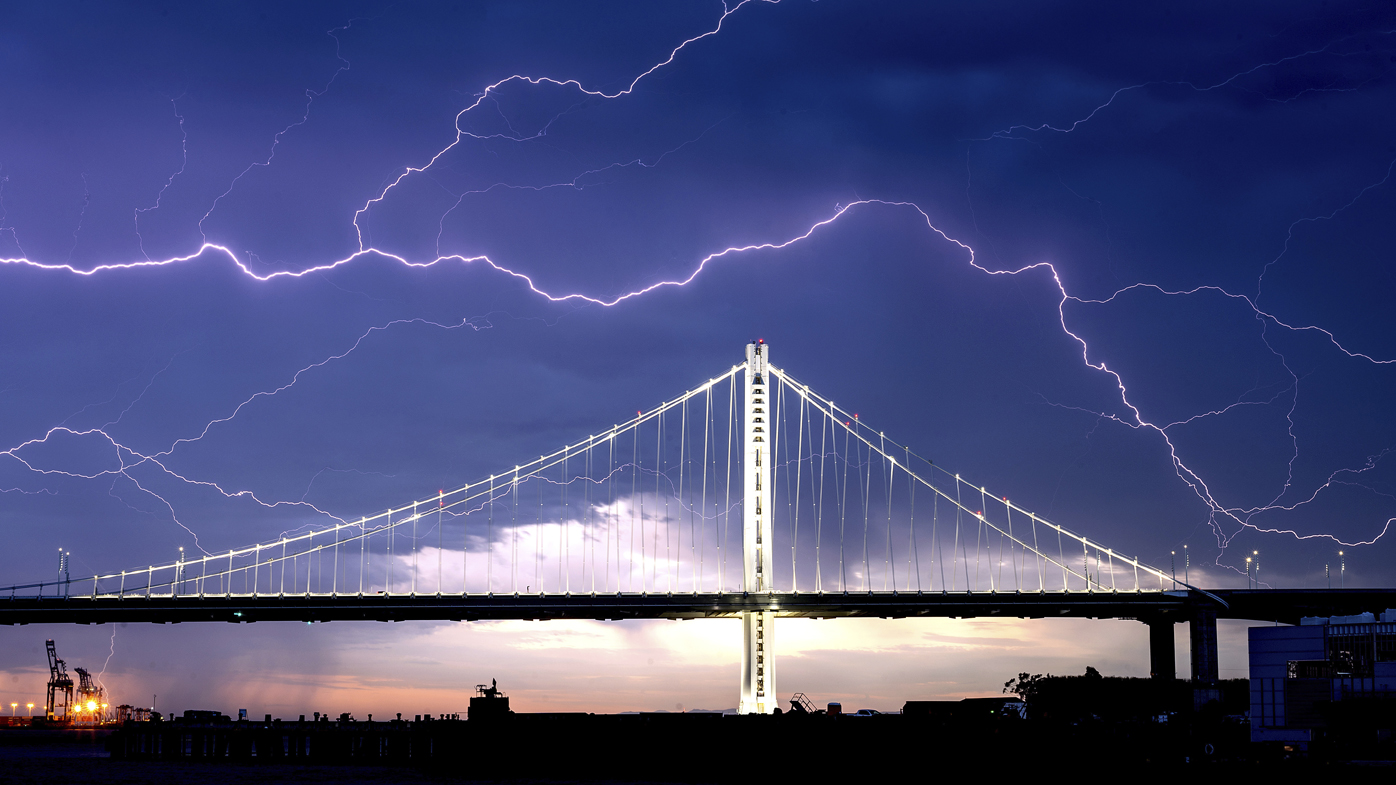 Resources are strapped, he said, given the number of fires burning in California.

"We're in the unfortunate position where firefighters are going to be spending several days out on the fire line," he said. "It's gruelling, it's exhausting."

"It's difficult to second guess what the fire commanders are doing with their aircraft. But it's not like last year when we saw just a huge wealth of resources flowing into the county," he said.

The cluster of wine country fires threaten an area that only last year grappled with another massive blaze that forced 200,000 to flee — a task made more complicated this year because of the pandemic.