Australia’s temperatures have become hotter and more extreme over the past 110 years, with temperatures reaching above average more often.

Australia's temperatures have become hotter and more extreme over the past 110 years, with temperatures reaching above average more often.

The Bureau of Meteorology (BoM) today released a map series that shows the anomaly of average temperatures for each calendar year. The anomaly is compared to the mean between 1961 and 1990.

"Australia's climate has warmed by more than a degree since 1910, which means very warm years like 2019 are now more likely to occur, while the trend in recent decades has been for drier winter and spring seasons in the south."

The map series shows an average temperature range from more than 3°C below average (blue/green), up to 3°C above average (red/brown).

According to BoM's 2019 Climate Statement, Australia's average mean temperature in 2019 was 1.52°C above average. 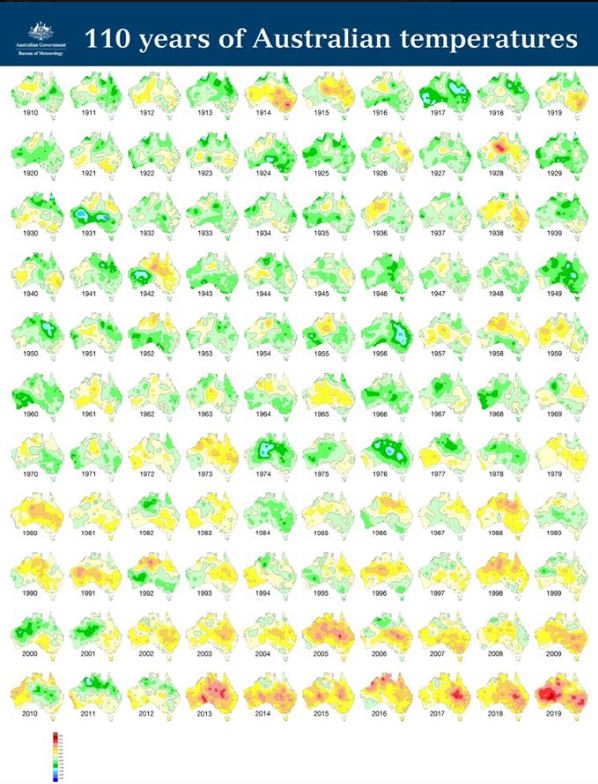 This makes last year the warmest on record since 1910 and surpasses the previous record in 2013 of 1.33°C above average.

"We know that there's a trend in both the severity of fire weather, the frequency of it, and an extension of the season."

The devastating bushfire crisis that continues to savage Australian communities and wildlife is expected to become the "new normal".

More than 27 people have died in the current bushfire season which has destroyed more than 10.3 million hectares across the country.

Dry conditions will be more frequent and there is no significant rainfall in sight, according to the BoM's head of long-range forecasting Andrew Watkins.