Surgeons often listen to music in the operating room, but it’s rare that it’s being performed by the patient during the surgery.

Doctors at Kings College in London got the in-operation performance courtesy of Dagmar Turner, who has had a passion for playing the violin since the age of 10.

The 53-year-old former management consultant was diagnosed in 2013 with a slow-growing brain tumour after suffering a seizure during a symphony.

Despite radiotherapy and other treatments, the tumour grew to the point where surgery was considered the best option, according to a Kings College press release.

However, Turner’s tumour was located in the right frontal lobe of her brain, close to an area that controls fine movement of her left hand.

Turner explained her passion for the violin to professor Keyoumars Ashkan, a consultant neurosurgeon at the college, and expressed concern the surgery might affect her ability to play.

He completely understood: Ashkan holds a degree in music and is also an accomplished pianist.

And so a plan was devised: First, Turner’s brain was carefully mapped to identify the areas that were active when she played the violin, and also those responsible for controlling language and movement.

Then Turner agreed to be woken up halfway through the surgery to play the violin so that doctors would be able to steer clear of the parts of the brain that controlled the delicate hand movements used when playing the instrument.

The university did not say what Turner played during her surgery, but it turned about to be a success: She was sent home three days later with her husband and son, and hopes to rejoin her orchestra soon.

“The thought of losing my ability to play was heart-breaking but, being a musician himself, Prof Ashkan understood my concerns,” she said in the release. “He and the team at King’s went out of their way to plan the operation — from mapping my brain to planning the position I needed to be in to play.”

This type of surgical procedure is rare, but it has happened before.

In 2018, teen musician Kira Iaconetti sang during an operation to treat a form of epilepsy that triggered seizures when she listened to or performed music. 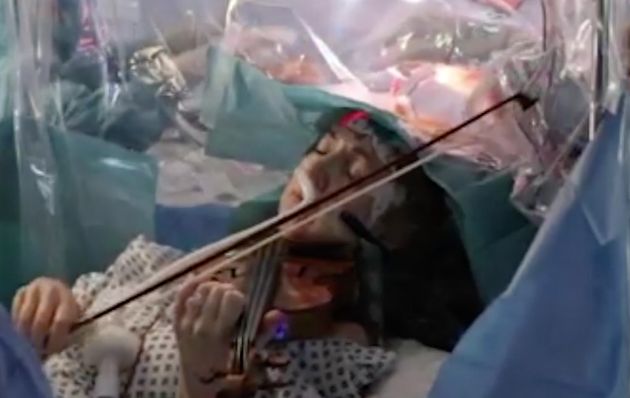