Samoa has sworn in its first female Prime Minister in a makeshift ceremony in a tent after she was locked out of Parliament amid a power struggle with the country’s longstanding leader.

Samoa has sworn in its first female Prime Minister in a makeshift ceremony in a tent after she was locked out of Parliament amid a power struggle with the country's longstanding leader.

Fiame Naomi Mata'afa's Faith in the One True God (FAST) Party said the dramatic turn of events amounted to a "bloodless coup" following weeks of uncertainty after the country's deadlocked April 9 election.

Her narrow election victory was set to end almost 40 years of rule by the Human Rights Protection Party (HRPP), which has governed almost uninterrupted since 1982, and more than two decades with Tuilaepa Sailele Malielegaoi as Prime Minister.

Although Samoa's Supreme Court ruled Sunday that the order cancelling the parliamentary sitting was "unlawful," FAST arrived at Parliament on Monday to find the doors locked, according to RNZ.

"I think a coup would be accurate," FAST spokesman Lance Apulu told RNZ when asked to describe Monday's events.

"Bloodless, but they are actually coups."

FAST went ahead with the swearing-in ceremony on Monday in a tent, RNZ reported, although it is unclear how legitimate those proceedings will be. Monday was the final possible day a new parliament can be formed under the constitution.

But in a speech after the ceremony, Mr Malielegaoi questioned its legitimacy, calling it a "joke," RNZ reported.

READ:  Last-ditch polls put Biden ahead by a neck in key states

"Only the head of state, and no one else, can call parliament meetings and swear people in. None of what they did is legitimate," he said. CNN has reached out to both HRPP and FAST for comment.

Patricia O'Brien, an expert in Pacific history at Australian National University, agreed the situation was getting close to a coup although there was no element of force, adding it appeared HRPP was suspending the democratic process and ignoring multiple rulings of the court.

The situation was unprecedented since Samoa became independent from New Zealand in 1962, she said.

On the face of it, the fight over which party has the right to govern Samoa comes down to a gender quota rule.

Initial results showed FAST and HRPP each won 25 seats in Parliament, with the final seat going to an independent MP, according to Samoa's election commission.

That independent candidate opted to go with FAST, giving the party 26 seats. But the Samoan electoral commission created a new seat to fulfil a gender quota, in turn giving HRPP 26 seats, too.

Under Samoa's constitution, at least 10 percent of the parliamentary seats must be held by women. If the threshold is not met, then the highest performing unsuccessful female candidates are appointed. Five seats were won by women at the April 9 election, but that only constituted 9.8 percent of seats.

Earlier this month, the Supreme Court overturned the commission's decision to create a new seat, clearing the path for Ms Mata'afa and the FAST party to form the next government.

READ:  Berejiklian committed to working with Nationals leader after stoush

Kerryn Baker, a research fellow in Pacific Politics at Australian National University who specialises in gender representation, said it was hard to know how much of HRPP's argument around gender quota was about commitment to the constitution, and how much was political manoeuvring.

"Women's representation and leadership has almost been weaponized in a way," she said.

If Ms Mata'afa's FAST party is allowed to form the next government, that would make her Samoa's first woman Prime Minister, and the only sitting female leader of any Pacific island country.

Hilda Heine became the first female leader of an independent Pacific island nation in 2016 when she was elected President of the Marshall Islands, according to the ABC. She is no longer in power.

The Pacific region \has the lowest level of female representation in parliament in the world at 18 percent. In the Pacific islands, only 6.4 percent of lawmakers are women, according to the Inter-Parliamentary Union, well below the Middle East, on 17.2 percent, or West Africa, on 15.8 percent.

Dr O'Brien, said she expected incumbent Mr Malielegaoi to pursue every option to stay in power.

"(Mr Malielegaoi) has forgotten who he works for," she said.

"He's never had to be answerable to the downside of democracy which is when you have to leave office. He's basically ruled Samoa as a one-party state."

She said he had "severely" damaged his reputation as a Pacific leader, and his actions were in stark contrast with the "dignity" and "restraint" displayed by FAST's Ms Mata'afa, the daughter of Fiame Mataʻafa Faumuina Mulinuʻu II - the first Prime Minister of Samoa following independence.

"This is an extremely important litmus test for democracy in the Pacific and its retention," Dr O'Brien said, adding there was a risk HRPP's actions could provoke unrest.

"If he keeps pushing it, history tells us that things can get very ugly. It's a very dangerous path to go down."

She said there needed to be decisive action from democratic countries with a role in the region, including New Zealand and Australia. 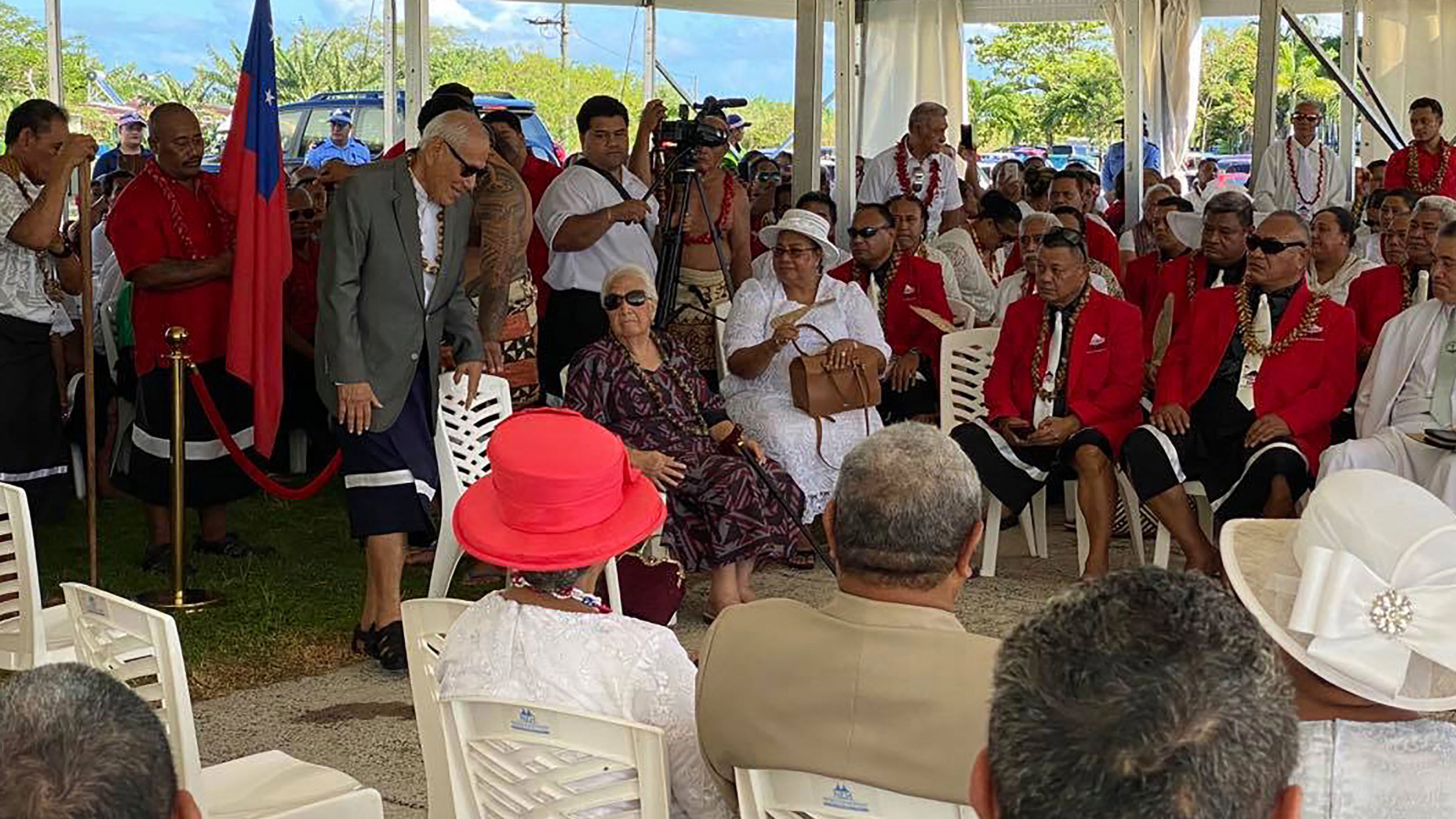 Foreign Minister Marise Payne said the country valued its close relationship with Samoa. "It is important that all parties respect the rule of law and democratic processes. We have faith in Samoa's institutions including the judiciary," she tweeted.

New Zealand Foreign Minister Nanaia Mahuta tweeted Monday that New Zealand encouraged "all parties in Samoa to continue to uphold the rule of law and show respect for their constitution and democratic process."

On Monday, the Federated States of Micronesia became one of the first countries to formally recognise Ms Mata'afa as the new Prime Minister.

"It is imperative that we show our friends - especially during their darkest hours - that we stand with them," Micronesia's President David W Panuelo said in a statement.

"Recent weeks have been very troubling for the Samoan People, who have been witnessing what is arguably a Constitutional and Political crisis."