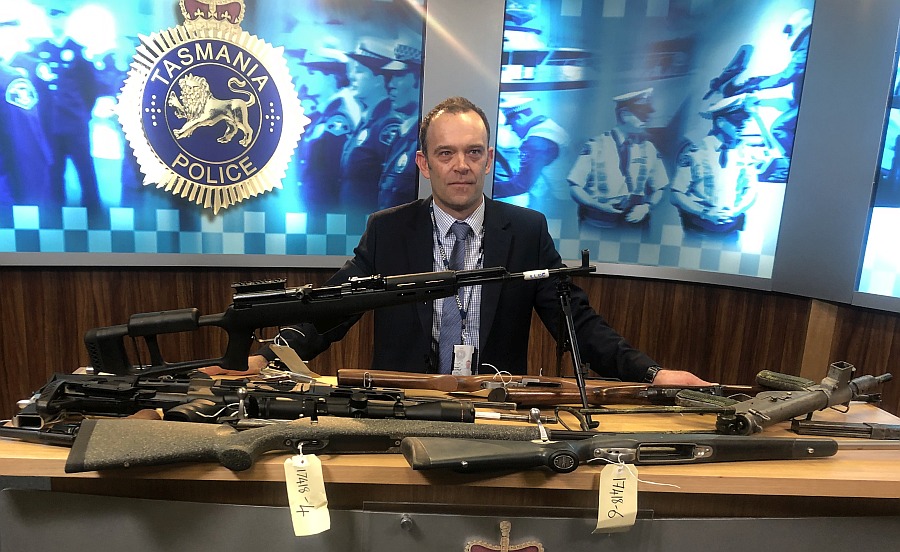 Police revealed they have seized over 40 illegal firearms, silencers, a taser and ammunition as part of an ongoing firearms trafficking investigation. A key item in the haul was a World War Two period submachine gun. Some of the firearms recovered, in various operations since May, had been previously reported stolen. More recently, members of […]

Police revealed they have seized over 40 illegal firearms, silencers, a taser and ammunition as part of an ongoing firearms trafficking investigation.

A key item in the haul was a World War Two period submachine gun. Some of the firearms recovered, in various operations since May, had been previously reported stolen.

More recently, members of the Crime and Intelligence Command led a search at Parattah (near Oatlands) on Tuesday 1 September for illegal firearms and were assisted by members of Bridgewater CIB, Southern Crime Management Unit, Firearms Services and the Dog Detection Unit.

A number of items including pistols and a submachine gun, ammunition, a silencer, a taser and firearms parts were seized as a result of this search. A 63 year old Parattah man was arrested for firearm offences and was subsequently charged with a number of firearms offences including (multiple charges of) unlawful trafficking in firearms, possessing prohibited and unregistered firearms,
possessing firearms and ammunition when not the holder of a firearms licence and failing to ensure the safe keeping of a firearm.

He was bailed to appear in the Hobart Magistrates Court in February 2021.

“Any illicit firearm is a concern a Tasmania Police,” said Detective Inspector Damien George. “Firearms in the wrong hands are dangerous and of the utmost concern to police.”

He said firearm trafficking is one of the key emerging areas the Crime and Intelligence Commission will focus on.

“We take every opportunity to take illegal firearms off our streets by having a permanent firearms amnesty, carrying out random storage inspections and investigating diligently when firearms theft occurs,” DI George said.

As part of continuing investigations, a 57 year old Richmond man was charged with unlawful trafficking in firearms. The man – who police will allege was operating as a licensed Tasmanian firearms dealer at the time of the offence – was charged with unlawfully trafficking in firearms and was bailed to appear in the Hobart Magistrates Court in March 2021. Other people were also charged recently in relation to firearms.

The Australian Crime and Intelligence Commission is assisting Tasmania Police with nationwide traces on all the illicit firearms seized to date.

DI George described the finding of the submachine gun as ‘most troubling’ and the overall haul as ‘signifcant’. He noted that the individual concerned had made an effort to conceal it from search, but a firearm detection dog had assisted Police in locating it.

“That is a prohibited firearm.

Although it dates back to World War Two, it is a machine gun that has the ability to fire significant rounds in very quick succession.

And as indicated, every firearm that is not stored appropriately, or that is not registered, is a firearm that we can get off the streets, (and that) is of value to Tasmania Police and the community at large.”

For more great content by and for Tasmanians, check out Tasmanian Times!

Police clarified that outlaw motorcycle gangs were not involved in the firearms seizures presented.

They urged people with firearms to take advantage of the state’s ongoing amnesty.

“We’re certainly aware that there are firearms that exist in the community,” explained DI George. “Now we’ve got registered firearms, we have firearms that are unregistered that have been in families with individuals for a significant period of time. I would always suggest to those people that have firearms that are stored inappropriately, that are under a bed, you know, locked away somewhere in the shed, that amnesty exists for that purpose. Albeit you are a law abiding citizen, the issue you have is that sometimes other people will know that you’ve got that firearm, and it is attractive to the criminal element.”

“There is always information that we’re in receipt of that we’ll continue to follow up. So I’d certainly suggests that there are the likelihood of further charges is, is high.”

Anyone with information in relation to stolen firearms or illegal firearms activity is urged to contact police on 131 444 or Crime Stoppers anonymously on 1800 333 000.