President Donald Trump has made his first public appearance in six days – and the first since the US Election was called – to honour fallen soldiers for Veterans Day.

President Donald Trump has made his first public appearance in six days - and the first since the US Election was called - to honour fallen soldiers for Veterans Day.

The solemn-looking president visited the Tomb of the Unknown Soldier at Arlington National Cemetery, in Virginia, accompanied by First Lady Melania Trump.

Neither Mr Trump or Mrs Trump wore face masks for the appearance where the president laid a wreath. 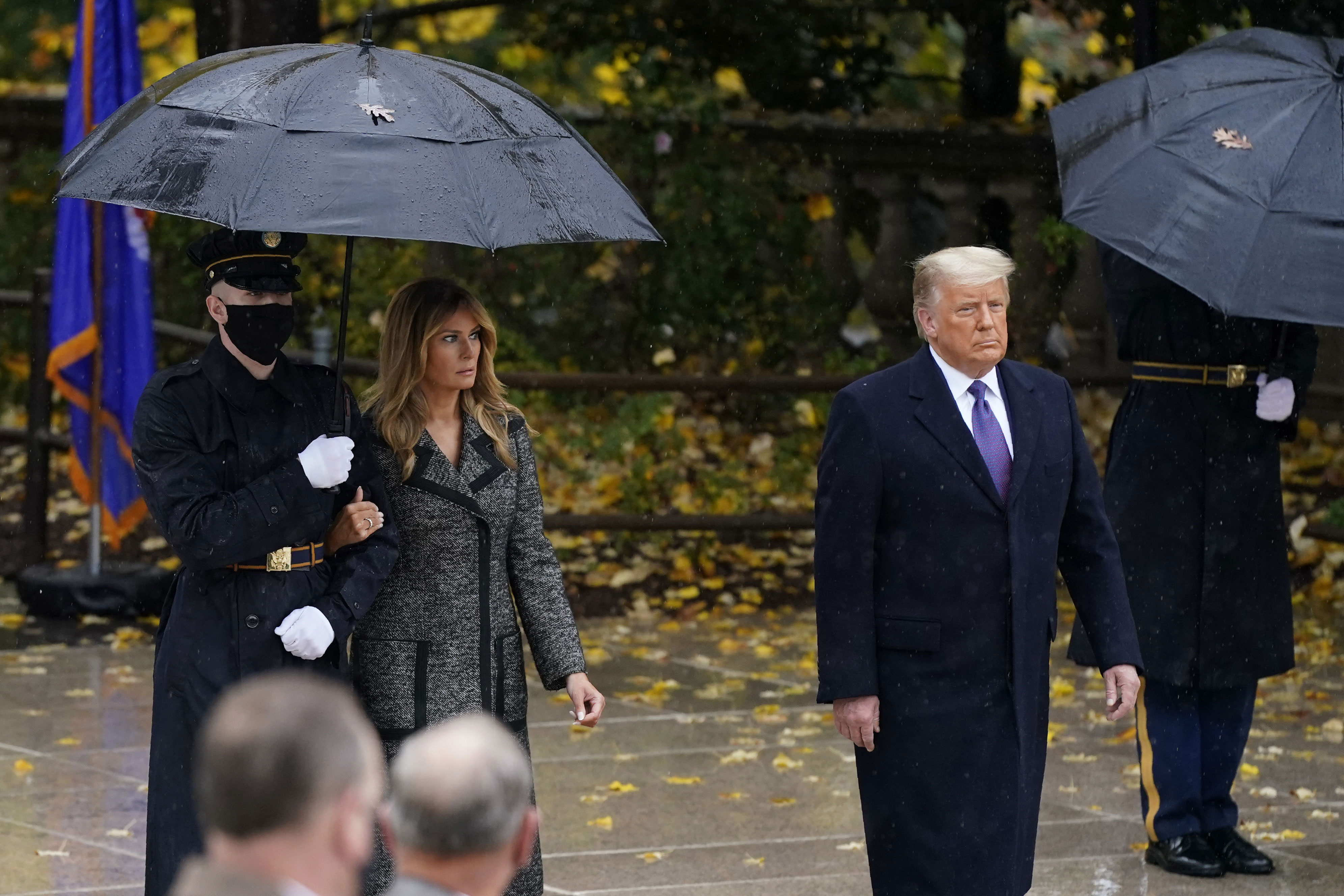 He was also joined by Vice President Mike Pence.

Mr Trump, who honoured veterans in the ceremony that was held during a steady rain, has spent the last several days holed up at the White House tweeting angry, baseless claims of voter fraud after his election loss. 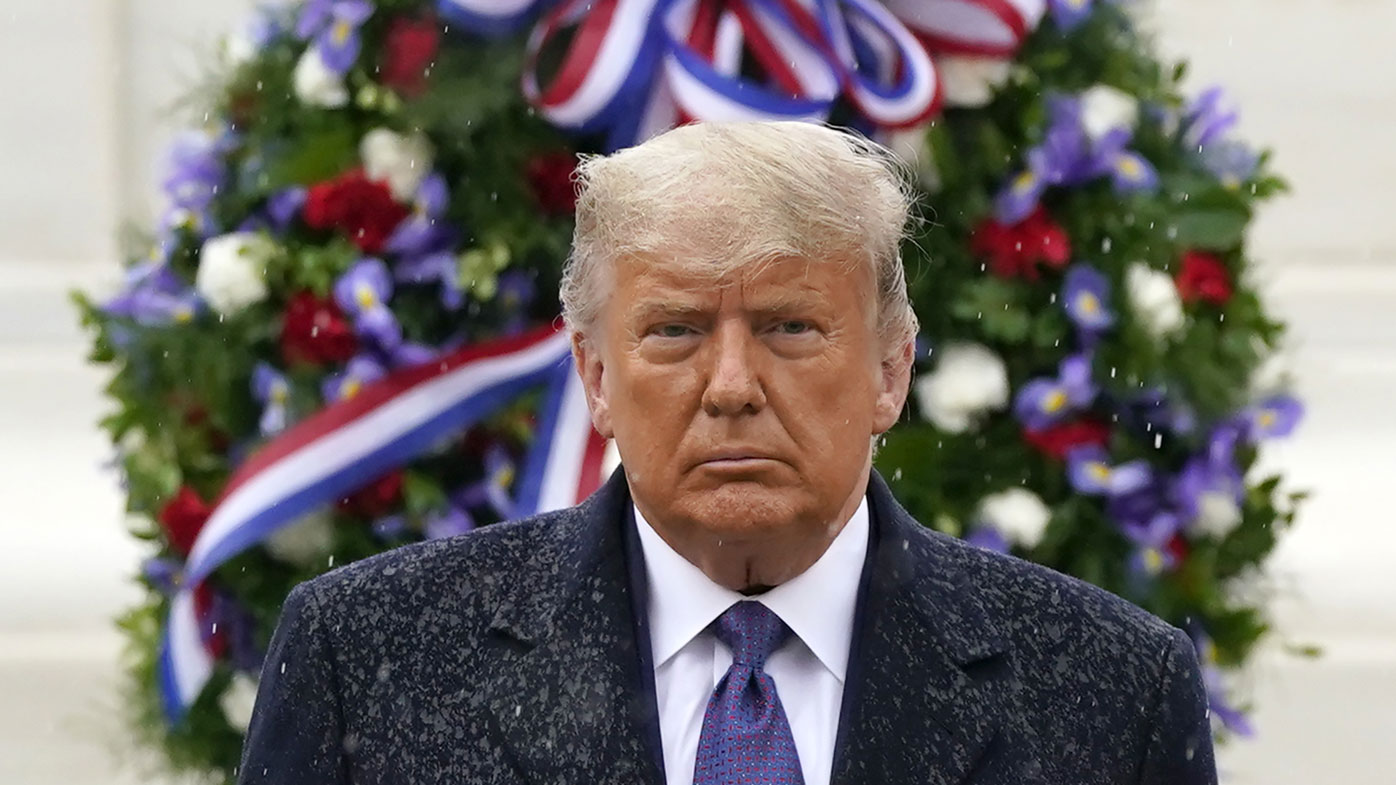 He's made no public comments since President-elect Joe Biden surpassed the 270 electoral votes on Saturday needed to win the presidency.

Hours before his appearance, Mr Trump once again told his Twitter followers: "We win".

Meanwhile, President-elect Joe Biden has shrugged off his predecessor's fierce refusal to accept the election and vowed "to get right to work". 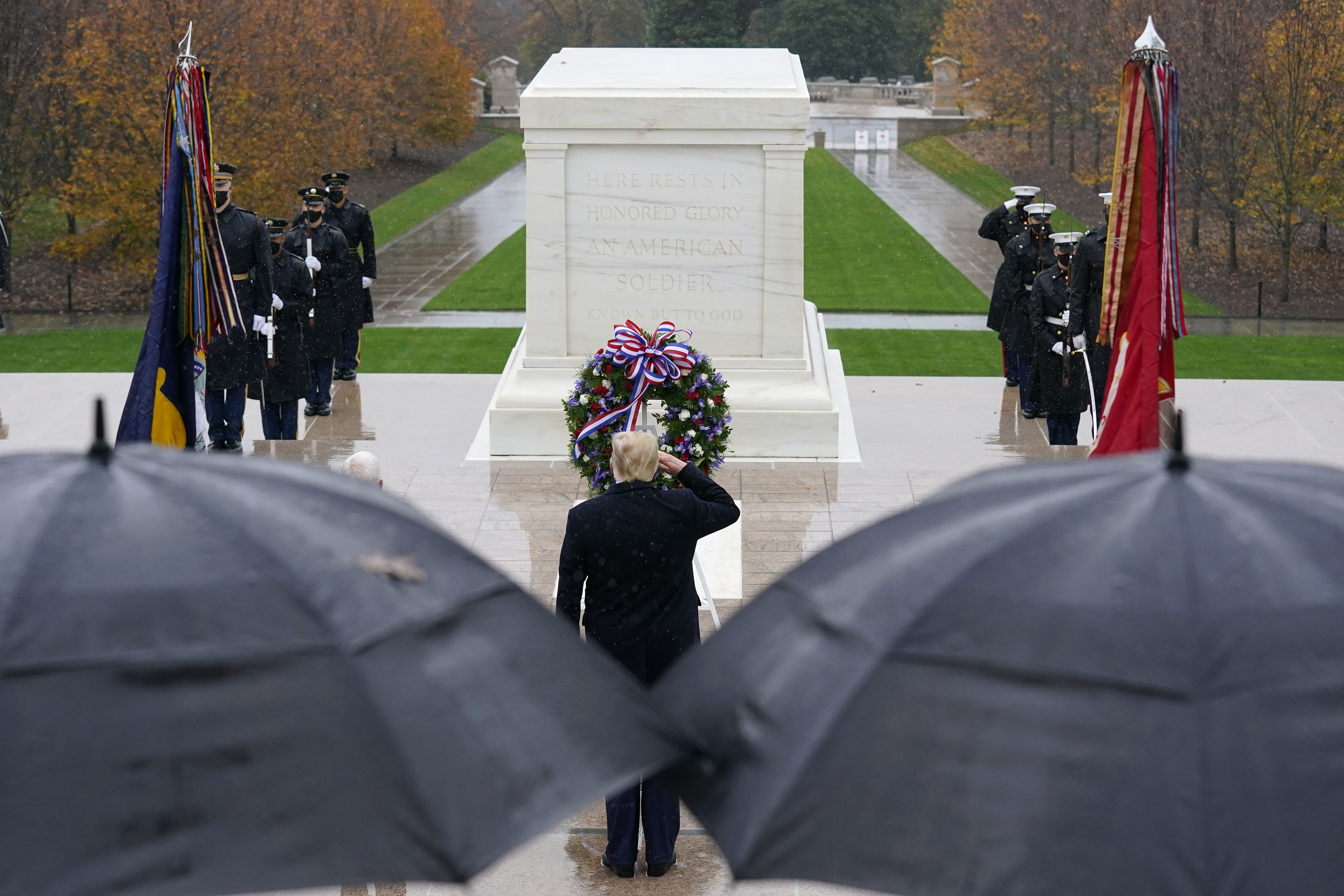 Mr Trump won the state of Alaska this morning, CNN projects, but its three electoral votes will have no impact on the overall result. Biden was declared the winner on Sunday when Pennsylvania was declared for him, taking his total electoral colleges so far to 279, beyond the 270 needed to win the presidency. 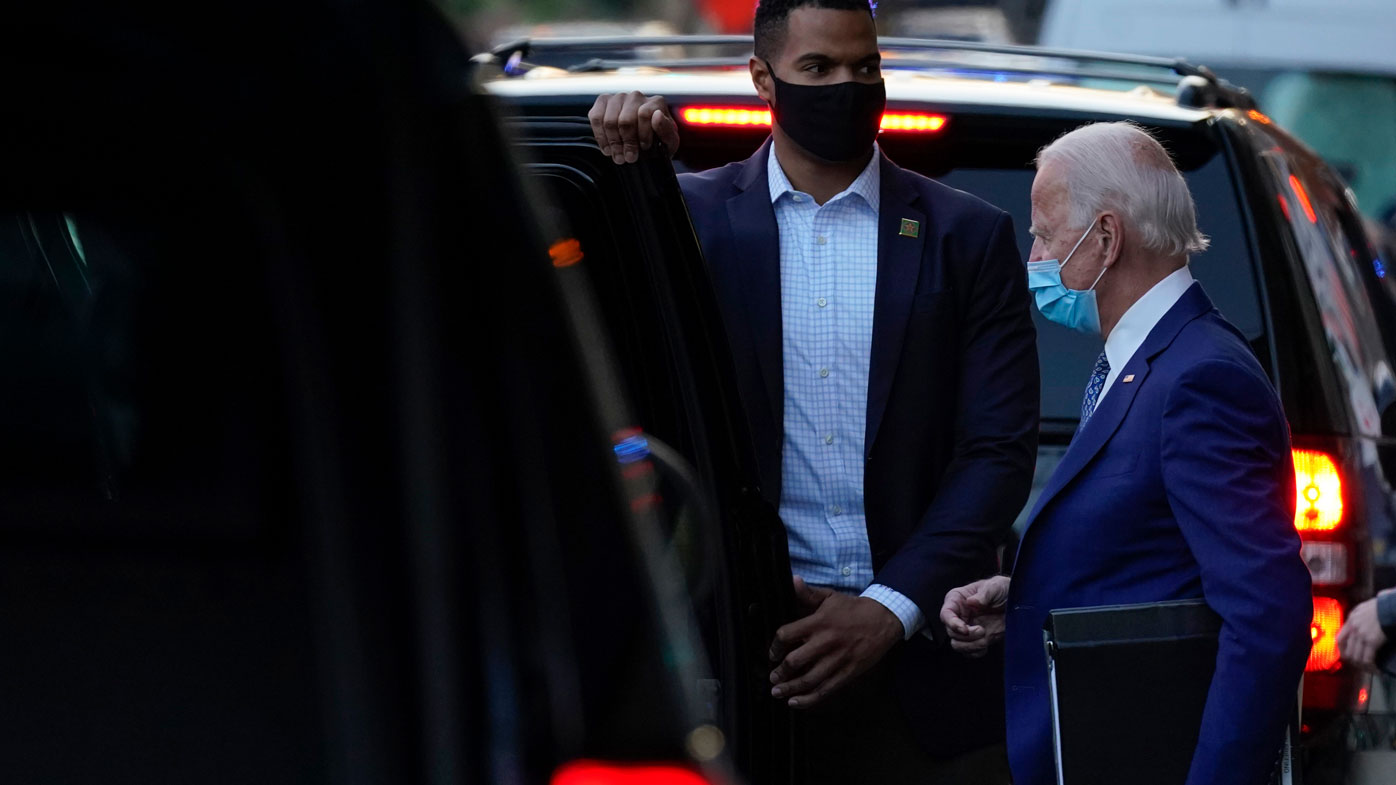 Trump's resistance, backed by senior Republicans in Washington and across the country, could also prevent background investigations and security clearances for prospective staff and access to federal agencies to discuss transition planning.

As some Democrats and former Republican officials warned of serious consequences, Biden sought to lower the national temperature Tuesday as he addressed reporters from a makeshift transition headquarters near his home in downtown Wilmington.

Biden described Trump's position as little more than an "embarrassing" mark on the outgoing president's legacy, while predicting that Republicans on Capitol Hill would eventually accept the reality of Biden's victory. The Republican resistance, Biden said, "does not change the dynamic at all in what we're able to do." 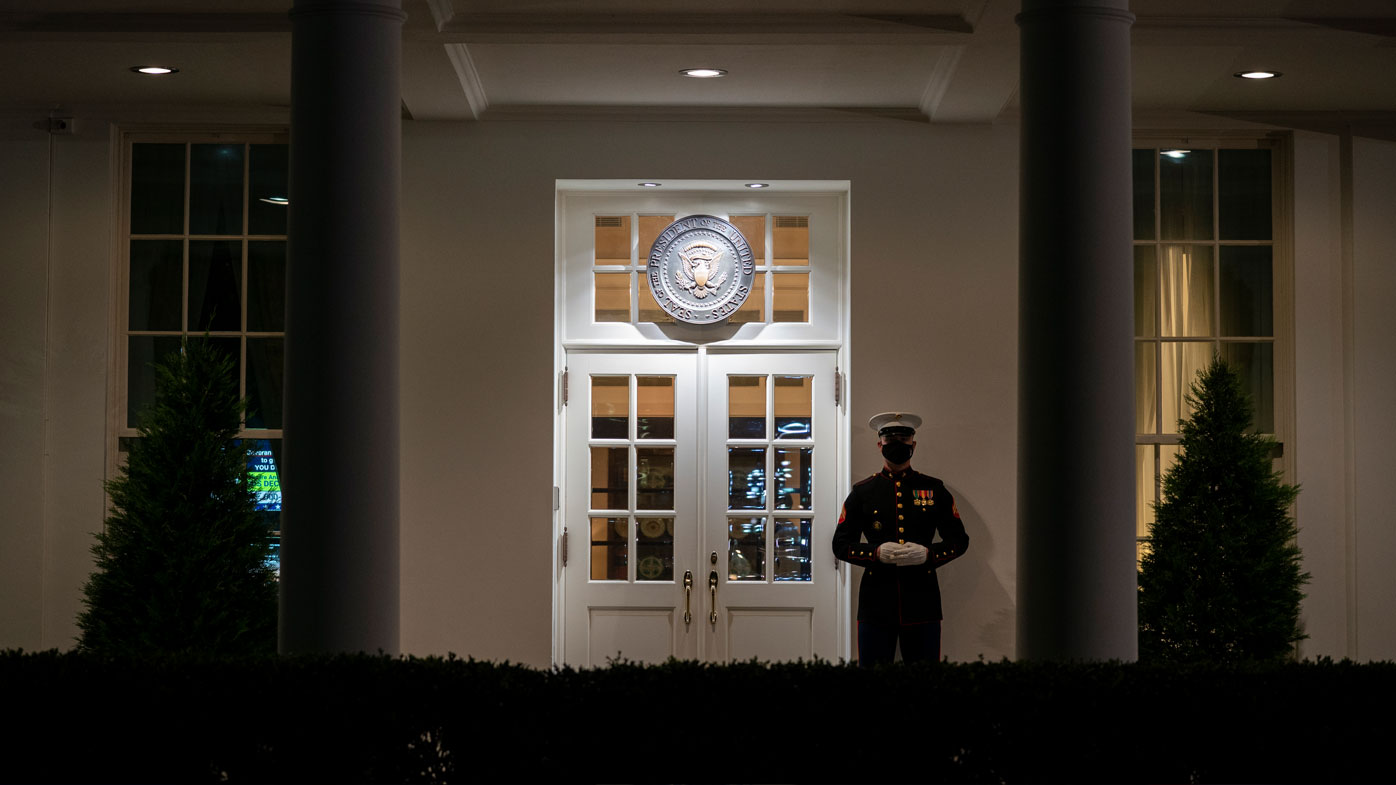 Additional intelligence briefings "would be useful," Biden added, but "we don't see anything slowing us down."

The measured comments come as Biden prepares to confront duelling national crises that actively threaten the health, safety and economic security of millions of Americans irrespective of the political debate. Coronavirus infections, hospitalisations and deaths are surging, the economy faces the prospect of long-term damage and the nation's political and cultural divides may be worsening.

Biden is betting that his low-key approach and bipartisan outreach — a sharp reversal from the current president's style — will help him govern effectively on Day One. But just a little over two months before Biden will be inaugurated, Trump and his allies seemed determined to make his transition as difficult as possible.

From his Twitter account on Tuesday, Trump again raised unsupported claims of "massive ballot counting abuse" and predicted he would ultimately win the race he has already lost. His allies on Capitol Hill, led by Senate Majority Leader Mitch McConnell, have encouraged the president's baseless accusations. Trump's tweets were swiftly flagged by the social media network as disputed claims about election fraud.

There is no evidence of widespread fraud in the 2020 election. In fact, election officials from both political parties have stated publicly that the election went well, and international observers confirmed there were no serious irregularities.

The issues Trump's campaign and its allies have pointed to are typical in every election: problems with signatures, secrecy envelopes and postal marks on mail-in ballots, as well as the potential for a small number of ballots miscast or lost. With Biden leading Trump by wide margins in key battleground states, none of those issues would have any impact on the outcome of the election.

America's allies began to acknowledge what Trump would not. 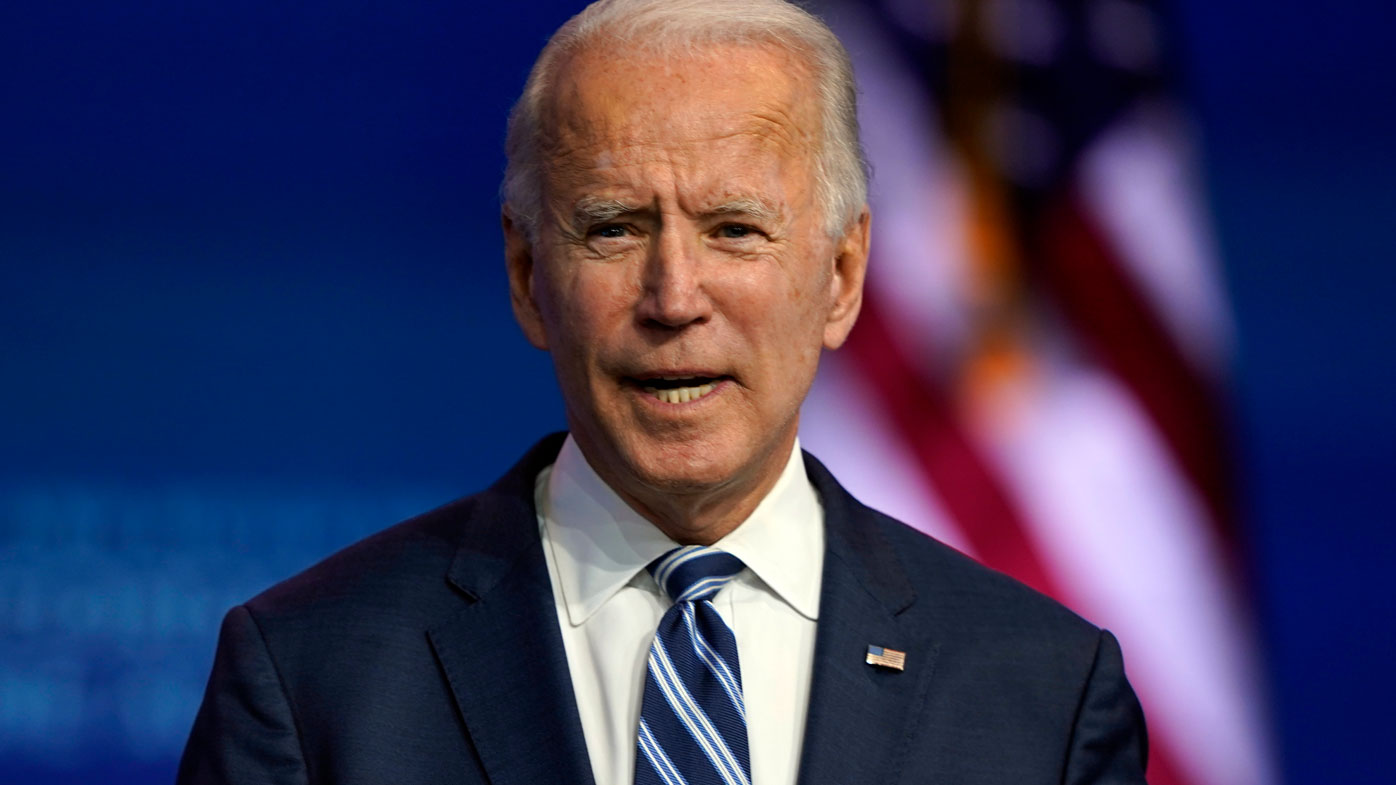 "I look forward to strengthening the partnership between our countries and to working with him on our shared priorities — from tackling climate change, to promoting democracy and building back better from the pandemic," Johnson wrote on Twitter. "Build back better" is a slogan that Biden and the British government have in common.

Meanwhile, Biden tried to stay focused on health care in the midst of the worst health crisis in more than a century. One of Biden's chief coronavirus advisers, former Surgeon General Vivek Murthy, briefed Senate Democrats on Tuesday by phone at their weekly virtual lunch.

In an afternoon speech, Biden delivered a forceful defence of the Affordable Care Act, just hours after the Supreme Court heard arguments on its merits. The high court ruled eight years ago to leave intact the essential components of the law known as "Obamacare", but Trump and his Republican allies are seeking to have it overturned.

If the 6-3 conservative court ultimately agrees with the GOP, millions of Americans could lose their health care coverage. While Tuesday's arguments indicate the court is unlikely to strike down the entire law, the prospect added new weight to the already heavy burden Biden inherits from the outgoing administration.

"It's a law that saved lives and spared countless families from financial ruin," Biden charged. He vowed to work with Congress to strengthen the health care law "as soon as humanly possible."

For now, however, Republicans on Capitol Hill, like those in the Trump administration, are showing no desire to cooperate with a Biden administration. 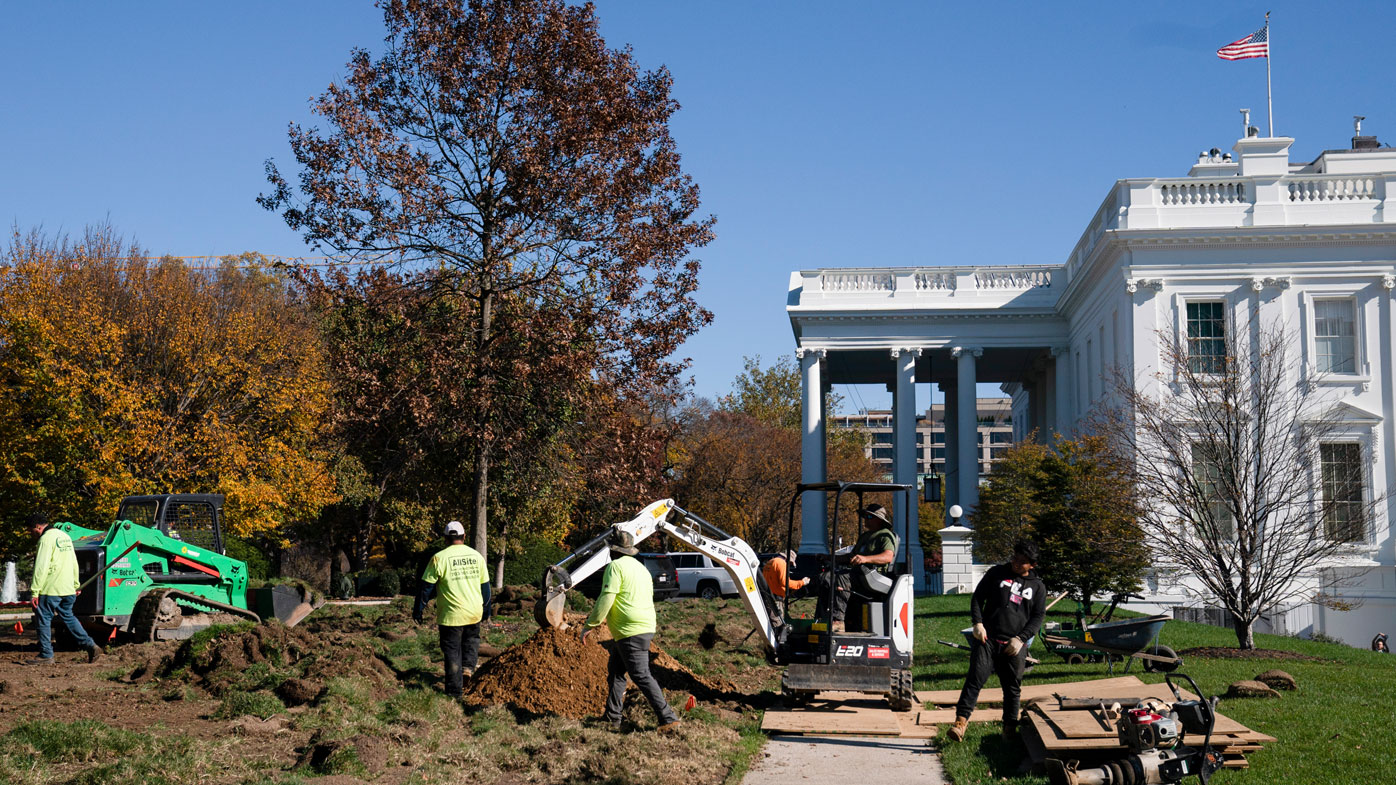 Secretary of State Mike Pompeo on Tuesday predicted there would be a smooth transition — to another four years of Trump in power. And McConnell largely endorsed Trump's approach: "Until the Electoral College votes, anyone who is running for office can exhaust concerns."

Biden spent much of Tuesday working alongside Vice President-elect Kamala Harris at a theatre near his home. He is expected to quickly name a chief of staff and start considering Cabinet appointments, though those likely won't be finalised for weeks.

Republicans are increasingly eyeing a December deadline to publicly accept the election result, giving Trump time and space to exhaust his legal challenges. That's when the states face a deadline to certify results and a Dec. 14 deadline for the Electoral College to cast its votes. It's also roughly the same amount of time it took to resolve the 2000 election dispute between Republican George W Bush and Democrat Al Gore.

Biden's team is calling on the General Services Administration, led by a Trump-appointed administrator, Emily Murphy, to formally recognise Biden's victory. Until that happens, Biden will not receive comprehensive security briefings, transition funding or the ability to communicate with agencies to begin coordinating the transfer of power. 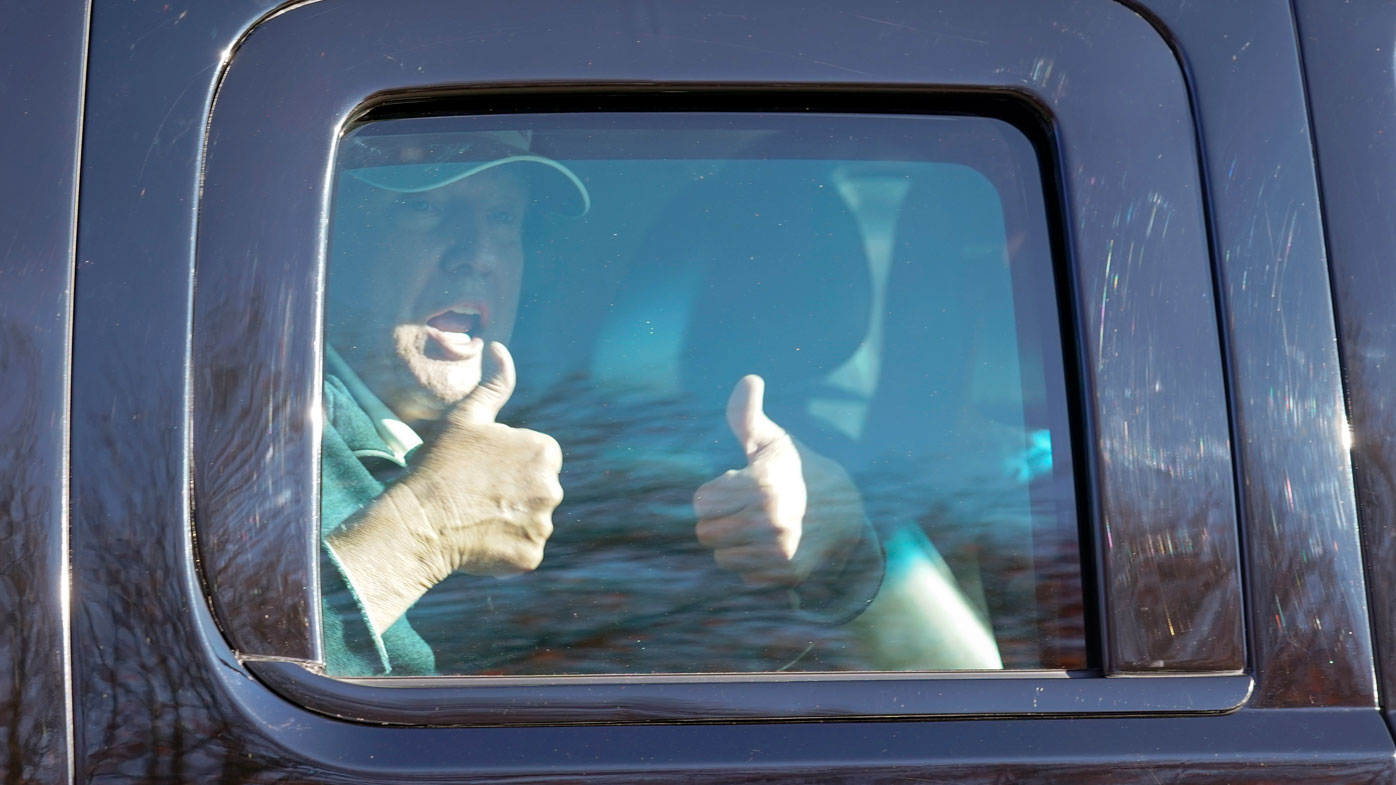 "Our adversaries aren't waiting for the transition to take place," said former Rep. Mike Rogers, insisting that Biden begin receiving the president's daily briefing immediately. "This isn't about politics; this is about national security."

He answered several questions during his first press briefing as the president-elect, almost all of them focused on the Republican Party's refusal to acknowledge his victory.

"I just think it's an embarrassment, quite frankly," Biden said.