“We’re going to win this thing,” Sanders told reporters at a press conference in Vermont Wednesday. He said that once the votes are tallied in California ― the major, delegate-rich state that Sanders did win ― he and Biden would be “basically neck and neck.”

Yet Biden’s wins were a stunning turnaround for a campaign that seemed to be on its last legs after a poor showing in Iowa and New Hampshire. Although Biden had a huge victory in South Carolina, there were still concerns about how well he would perform in the 14 Super Tuesday states, considering he had far less infrastructure and ads on the air in those places than some of the other candidates.

Sanders said that “of course” he was disappointed in the results, and he admitted that his campaign has not been as successful in turning out younger voters ― who tend to favor Sanders ― as he would have liked.

He also acknowledged that Biden had considerable success with black voters on Tuesday, adding, “We are doing very well with people of color. We are going to do better with the African-American community.” 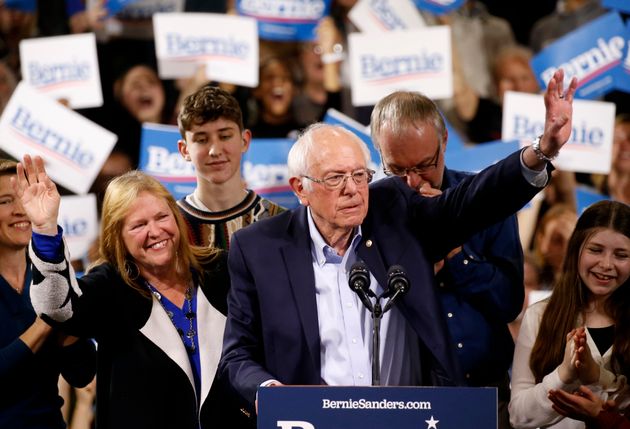 The Vermont senator said he had talked to Sen. Elizabeth Warren (D-Mass.) — who is trailing in the delegate count — a few hours before, and that she is taking time to assess how she moves forward.

Sanders said he likes Biden personally and believes he is a “decent human being,” but he emphasized that they have different visions for the country.

“Joe is running a campaign, which is obviously heavily supported by the corporate establishment. ... So what does it mean when you have a campaign that is funded very significantly by the wealthy and the powerful? Does anyone seriously believe that a president backed by the corporate world is going to bring about the changes in this country that working families and the middle class and low-income people desperately need?” Sanders said.

Sanders also hit the “corporate media,” which he said hasn’t given him a fair shake, pointing to comments made by MSNBC host Chris Matthews, who has since stepped down from the network. He asked the media to help facilitate a meaningful, issue-based campaign.

It’s understandable why Sanders would try to pivot to this terrain: Poll after poll shows that voters trust Sanders on the issues more than every other candidate, from health care to climate change.

The bigger obstacle for Sanders, however, is whether voters are basing their votes on the issues. So far, there aren’t many data points in Sanders’ favor. Exit polls coming out of Super Tuesday showed voters siding with Sanders on policy, but voting based on whom they believed could beat Trump: Biden. Sanders has incorporated this dissonance into his stump speech, touting head-to-head polling against Trump, that puts him in the lead the vast majority of the time.

READ:  No new cases as state prepares to open to northern NSW

What Sanders is banking on is a more difficult ask of voters. And those in his orbit know that.

“It’s a deeper commitment,” Larry Cohen, who chairs the Sanders-backing political action group Our Revolution, said. “It’s a commitment [to say] that there are things fundamentally wrong with this country. That’s a harder jump to make.”