Australia Day celebrations should remain on January 26 as it marks a significant day for many across the nation, an exclusive reader survey has found.

Australia Day celebrations should remain on January 26 as it marks a significant day for many across the nation, an exclusive nine.com.au reader survey has found.

The survey, of 1114 participants*, revealed 49 per cent felt strongly about the date, claiming it is very important to them.

Meanwhile, 32 per cent said they were indifferent to the date with 13 per cent believing it's not important and 6 per cent revealing they do not celebrate Australia Day.

An even greater number, 69 per cent, said they did not believe it was disrespectful to hold celebrations on January 26. 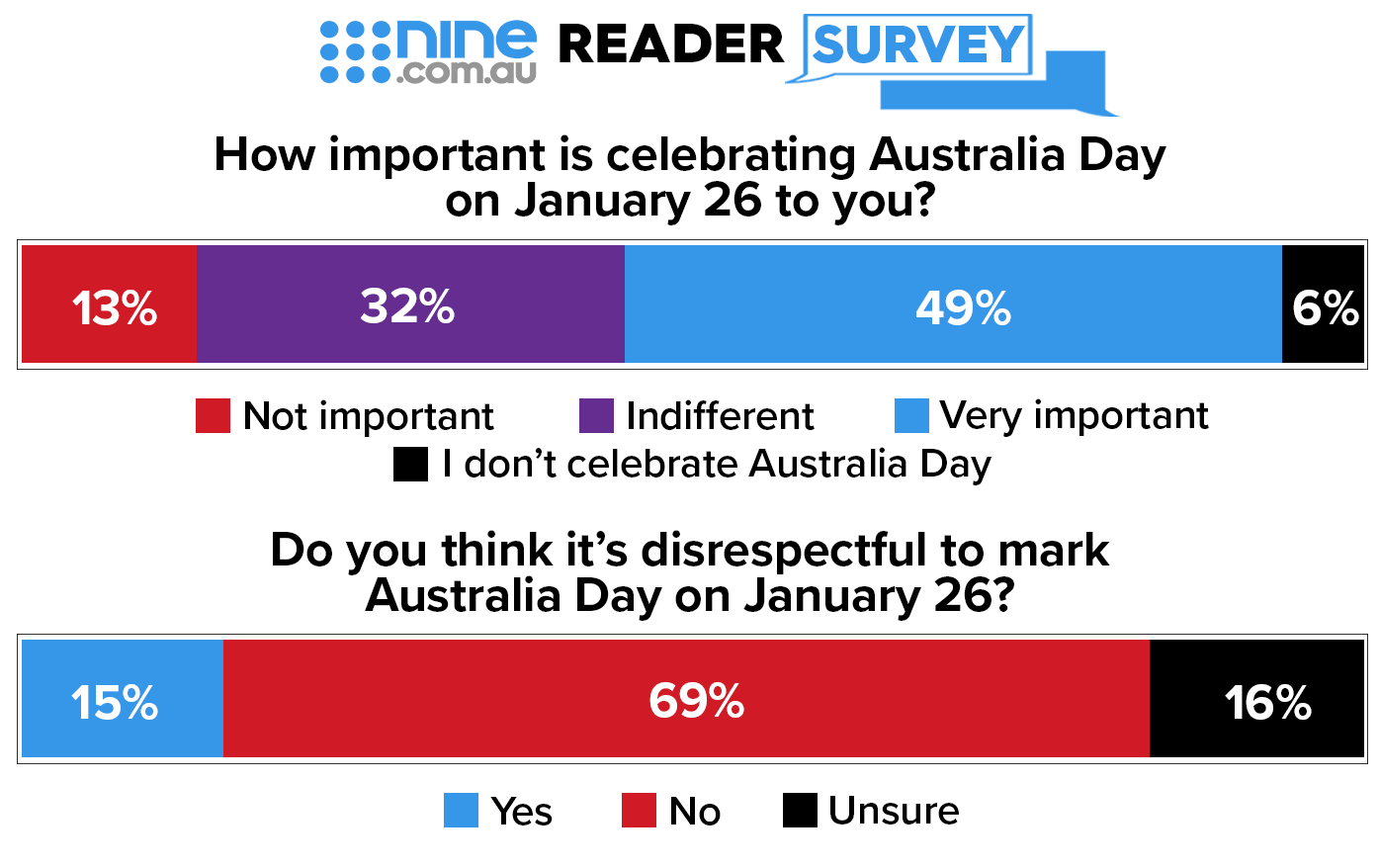 Tributes to indigenous culture and bushfire heroes will be the hallmark of Australia Day celebrations.

Prime Minister Scott Morrison will preside in Canberra at one of 454 ceremonies which will see a record 27,419 people conferred citizenship.

He'll be joined in the national capital by 2020 Australian of the Year, eye surgeon Dr James Muecke, as well as the winners of the senior and local hero awards, Professor John Newnham and Bernie Shakeshaft. 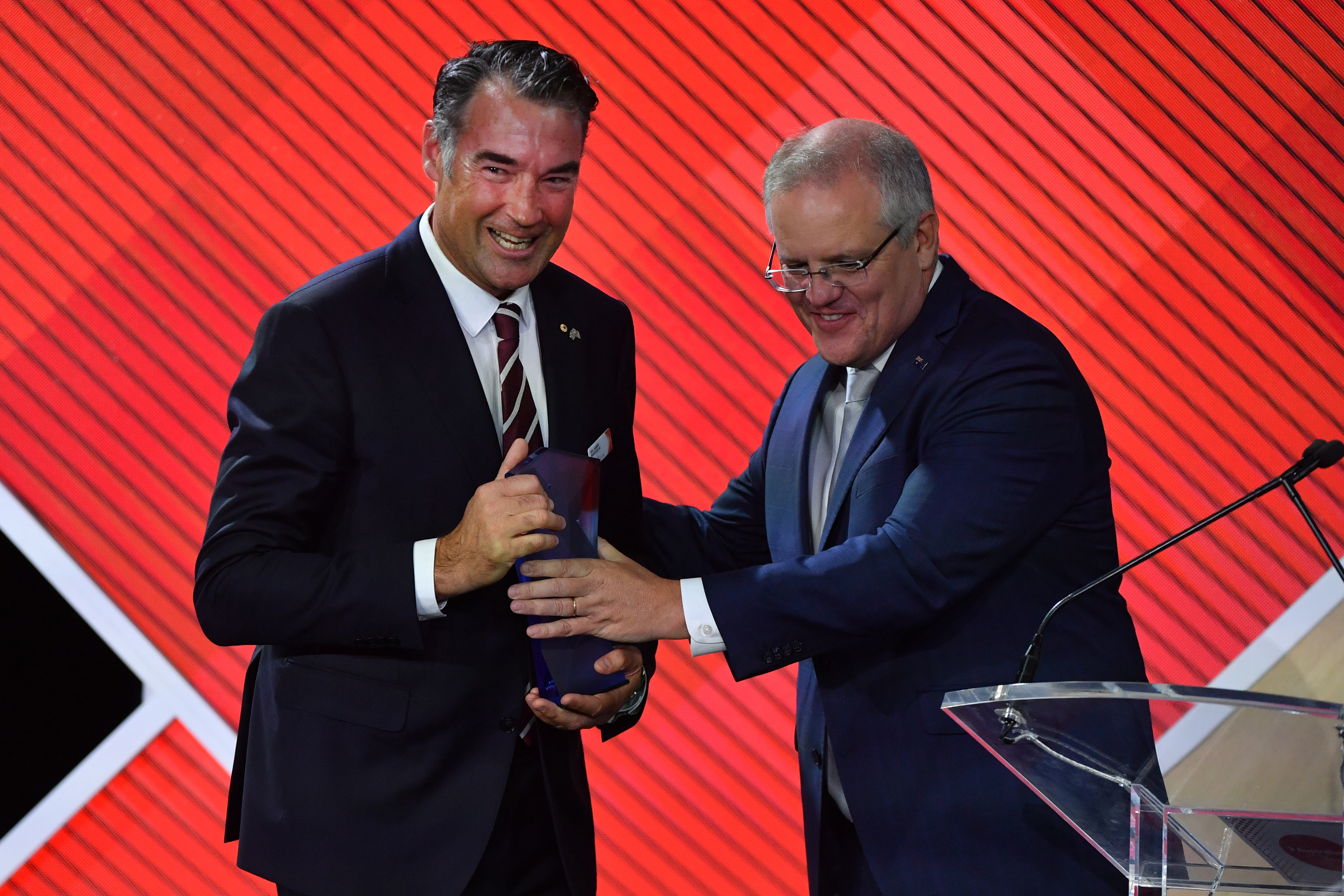 The Young Australian of the Year, tennis star Ash Barty, is in Melbourne for the Australian Open.

Millions of Australians will turn out for events across the country, many of which will have a strong focus on indigenous culture and pay tribute to emergency service workers and volunteers involved in tackling the bushfire crisis.

"We've seen Australia's character again in these times and it is strong," Mr Morrison told Australian of the Year nominees on Saturday.

Labor leader Anthony Albanese will use a speech in the Blue Mountains to appeal for a constitutionally enshrined voice to parliament for indigenous people.

"We cannot pretend our history began on this day in 1788," Mr Albanese says.

"We cannot deny the trauma that accompanied the birth of modern Australia."

A number of councils have cancelled official Australia Day celebrations, instead encouraging locals to take part in indigenous festivals.

And an Invasion Day protest will begin at Sydney's Hyde Park on Sunday with organisers hoping for a crowd bigger than last year's event which drew many thousands.

Australia Day celebrations will also take place on and around Sydney Harbour but not without some discord as councils and community members take a stand for indigenous rights.

The popular Ferrython will take place on the harbour followed by the Salute to Australia involving HMAS Canberra, a 21-gun salute on land and an RAAF jet formation flying overhead.

Other official events on Sydney Harbour on Sunday include the tug and yacht ballet, the harbour parade, the tall ships race and Australia Day regatta.

On Sunday night, crowds will be entertained by Australia Day Live at Circular Quay and the Sydney Opera House with musical performances, entertainment and dazzling pyrotechnics.

*The nine.com.au poll, which runs once a fortnight, canvases the views of the nine audience on 9Nation, which is an online community of our readers and viewers.