A dedicated and passionate community fundraiser has been named City of Newcastle’s 2020 Citizen of the Year. Michelle Faithfull coordinates the highly successful Hunter Homeless Connect Day, which links people experiencing homelessness and those at risk of it with essential services, helpful advice and other assistance. The annual event has connected thousands of people with … Continue reading “Australia Day award winners honoured”

A dedicated and passionate community fundraiser has been named City of Newcastle’s 2020 Citizen of the Year.

Michelle Faithfull coordinates the highly successful Hunter Homeless Connect Day, which links people experiencing homelessness and those at risk of it with essential services, helpful advice and other assistance. 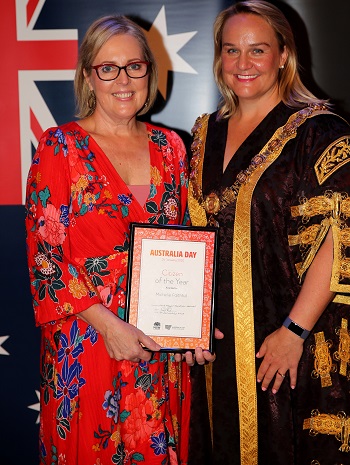 The annual event has connected thousands of people with accommodation and housing providers, health and wellbeing services, legal and financial assistance, employment, study, and general support.

Faithfull, from Bar Beach, also organises the annual all-women ‘Divas on the Green’ golf day at Merewether Golf Club for Westpac Rescue Helicopter and Hunter Breast Cancer Foundation, which is celebrating its 10th anniversary in 2020.

Over the past decade, she has raised $180,000 for local charities, including more than $90,000 for the Westpac Rescue Helicopter Service, almost $65,000 for the Hunter Breast Cancer Foundation and $20,000 for the new Ronald McDonald House Family Room at John Hunter Hospital’s neonatal intensive care unit. This amazing effort followed earlier volunteer work for children’s charities in the Hunter with which she felt aligned, following a personal tragedy.

“Losing my first-born daughter Jessica over 30 years ago at four months of age opened my eyes to the importance of community and supporting each other,” Ms Faithfull said.

“Bringing people together for a common cause has certainly become a passion of mine, and apart from honouring my daughter’s legacy, it has taken me on the most amazing journey of connection.

“The people of Newcastle have been very supportive of my activities here over the years and I am absolutely honoured to receive this award in a community I adore. I hope that I can inspire others to bring their communities together, because the rewards are priceless.”

“Until today, Michelle was one of Newcastle’s unsung heroes, so the City of Newcastle is thrilled to recognise her tireless efforts to assist those in our community who are doing it tough,” the Lord Mayor said.

“Michelle embodies everything that is good about the human spirit. Resolutely committed to improving the lives of others, she has contributed to many great organisations including Westpac Rescue Helicopter, Hunter Breast Cancer Foundation, Hunter Homeless Connect, Vinnies, Got Your Back Sista, Ronald McDonald House, Hunter Medical Research Institute, CanTeen, Camp Quality and the Starlight Foundation.

“The Citizen of the Year award is a fitting honour for her dedication to bettering our society and I hope the recognition helps her continue that endeavour.”

The City’s 2020 Young Citizen of the Year has been instrumental in the national Student Strike 4 Climate (SS4C) action.

New Lambton High’s Alexa Stuart, 16, has collaborated with peers, senior climate campaigners and SS4C’s national organising team since attending her first rally as a 15-year-old in 2018. 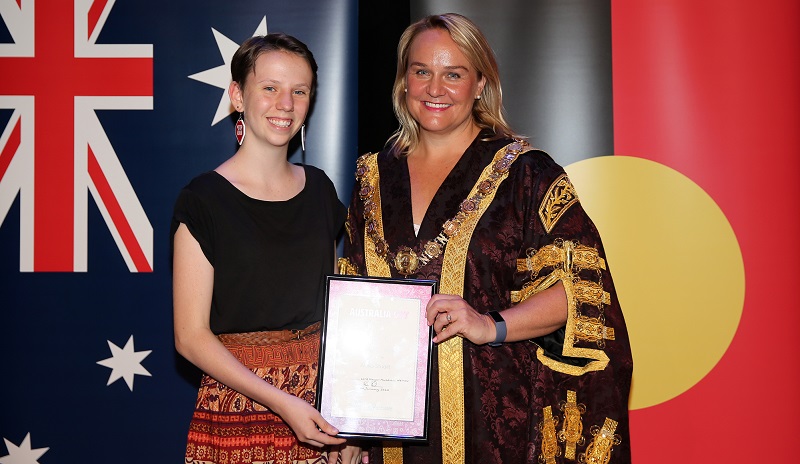 Alexa Stuart and the Lord Mayor.

The Year 11 student has variously liaised with police, spoken with media, delivered speeches, created banners and performed all manner of tasks behind the scenes to promote the SS4C movement.

“Alexa is an inspiring young person who has maintained excellent academic grades while leading her peers amid the climate emergency that the recent bushfires have brought to national and world prominence,” the Lord Mayor said.

“At such a young age she has represented the SS4C at meetings with local members of parliament, unions, university staff, local businesses, and spoken about climate change at her High School and local church.

“At last September’s global strike she gave an inspiring speech in front of 10,000 people and has played a major role in writing the national SS4C constitution.”

After two instalments of their annual event, which the City of Newcastle sponsors, Newcastle Pride will move to develop a Youth Pride Tribe this year to focus on events for LGBTIQ young people, featuring a 2020 Queer Youth prom. 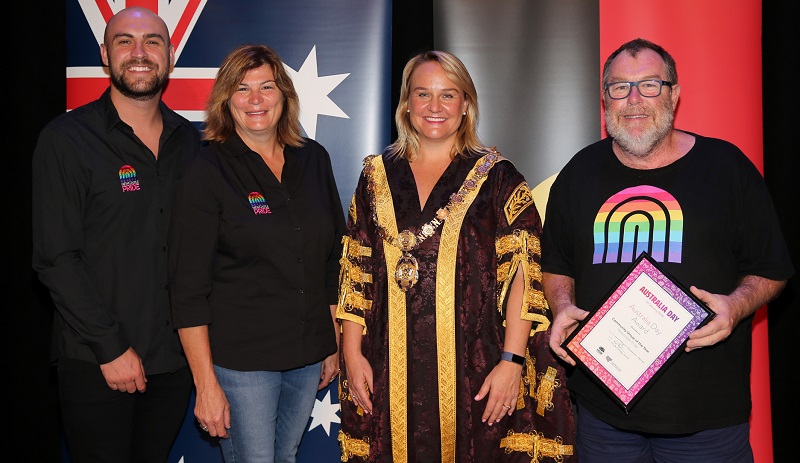 Newcastle Pride’s Ed Abbott, Leanne McDougall and Ivan Skaines with the Lord Mayor after receiving the Community Group of the Year award.

“I’d like to congratulate Newcastle Pride on their fantastic festival and for providing an inclusive, vibrant and fun environment for all LGBTIQ residents to build social connections and experience a community free of discrimination,” Councillor Nelmes said.

“The festival fosters a sense of community inclusion and participation, as well as benefits to the broader economy of Newcastle through tourism and event attendance, and its success owes to the hard work of the committee members.”

The Newcastle Citizen of the Year awards are decided by a panel consisting of: