Michael was left without access to several life-saving electrical devices as the family pleaded for help to restore power during Sydney’s mass outage earlier this month.

A quadriplegic man who relies on several life-saving electrical devices was forced to wait six days for Ausgrid to restore power to his home during Sydney's mass outage earlier this month.

The property in West Pymble on the upper north shore was one of 110,000 in Sydney that lost power on February 9 during storms and torrential rain.

Michael, who asked for his surname to be withheld, also suffers from prostate cancer, and is reliant on an electric bed, mattress, hoist, wheelchair and apnoea machine at night for breathing. 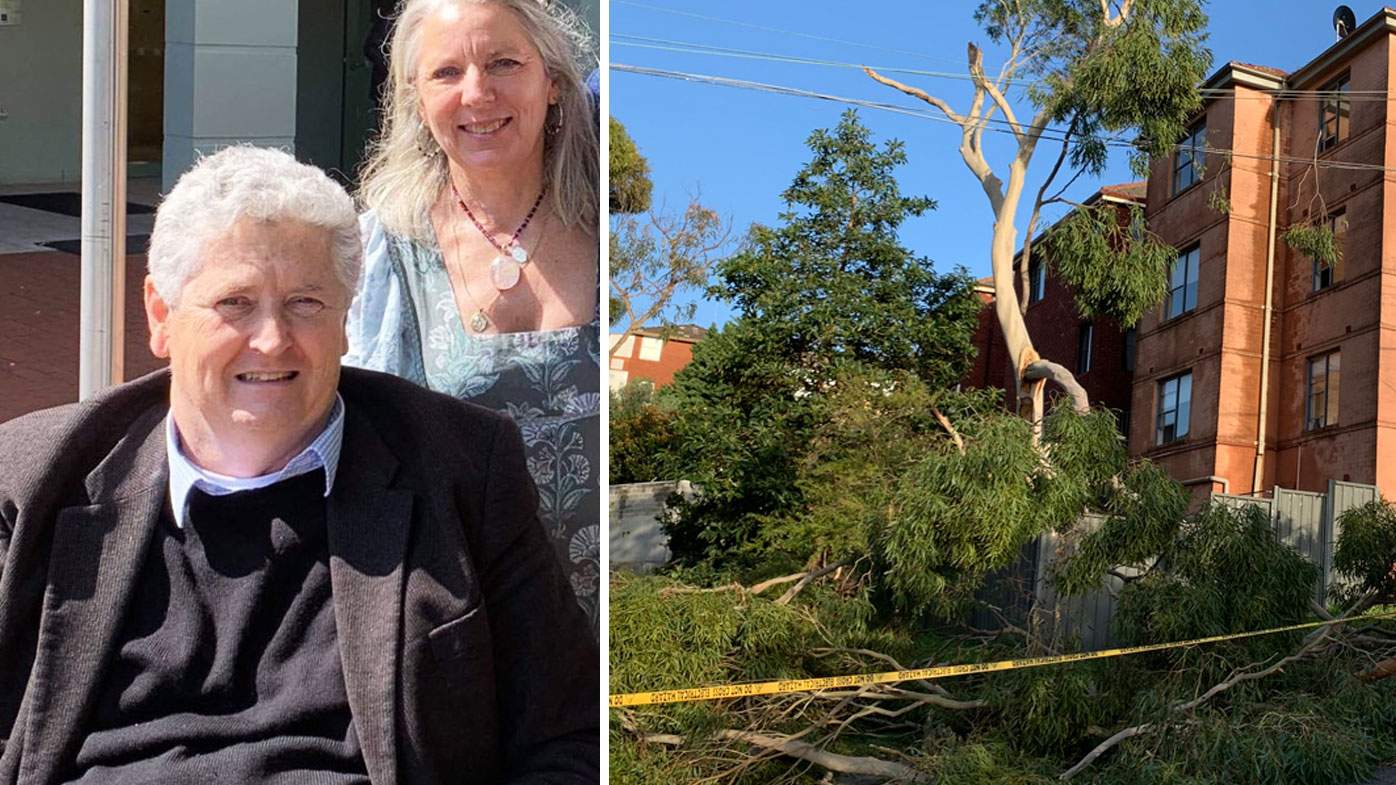 In what turned out to be a nightmare week for the family, Michael's wife Mary said they were left with no choice but to buy a $3000 generator to help power her husband's medical equipment, but then had a neighbour call the police on them because it was too noisy.

Mary said when the power went out on Sunday her first concern was with her husband's vital electrical equipment.

"Our electricity went out on Sunday. We kept on thinking maybe it will go back on, but then we realised how many lines were down," Mary told nine.com.au.

Mary she tried to ring Ausgrid in the evening but could not get through, and the same thing happened on Monday morning.

"We heard nothing and couldn't get onto anybody, so we couldn't even find out what was going on," Mary said.

"That's when I started to get really worried and was thinking, 'Oh my god, I have to buy a generator, or hire one'."

Michael's sleep apnoea meant he could stop breathing for as long as 86 seconds, and so for the first night without power he did not sleep, Mary said.

However, Mary said the most vital concern going forward was not being able to use Michael's electric air mattress, which adjusted his position constantly so his skin did not develop sores.

As a quadriplegic, Michael's response to the pain of lying in the one spot could also lead to a dangerous spike in blood pressure which would require a trip to an emergency department, Mary said.

"One the first night we had trees down in three directions, I was really aware that we couldn't get an ambulance in or out. The vulnerability that comes with that is extraordinary," she said.

By Monday morning, Mary said she was ringing Kennards and Bunnings stores to get hold of a generator, and soon found that most had already been bought or hired out.

"We had no priority at Kennards or Bunnings so we were just in a queue with everyone who was trying to keep their fridges running," Mary said.

Mary said she eventually had some luck at the Castle Hill Bunnings store when she rang in tears and a staff member took pity on her.

"The woman from Bunnings was the first person in the whole saga that even helped me. She said she would hold the last one for me," Mary said.

The family also needed to rent a separate battery for Michael's sleep apnoea machine, because it was too sensitive to run on the generator.

The rest of Michael's medical equipment was able to run on the generator, however, the family's problems were not yet over, with a neighbour calling the police because of the noise it made.

While the police and other neighbours were supportive, Mary said she felt she had little choice but to turn the generator off in the evenings to avoid more conflict. 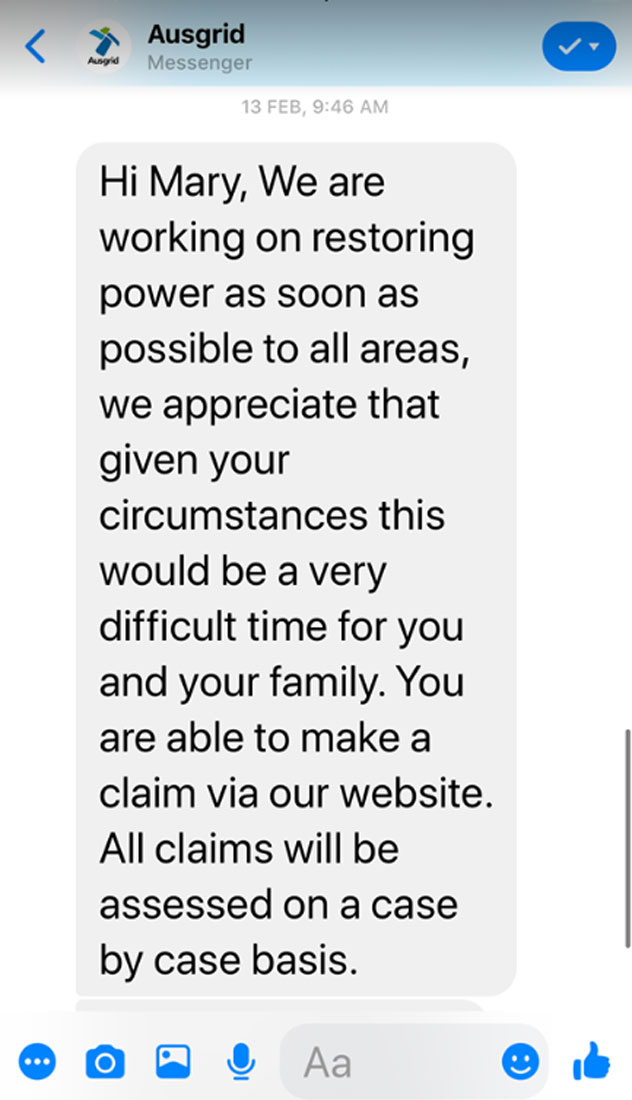 Meanwhile, the family said they were still trying to get in contact with Ausgrid.

"We were walking up and talking to Ausgrid staff nearby who were working on the powerlines, I can't even tell you how many times a day. We told them our situation and asked if they could help us out. Michael went up in his chair," Mary said.

A response to a message Mary sent Ausgrid via Facebook on February 13, five days after their power went out, appeared to sympathise with the family's situation but then merely directed her to "make a claim online".

"Hi Mary, we are working on restoring power as soon as possible to all areas, we appreciate that given your circumstances this would be a very difficult time for you and your family. You are able to make a claim via our website.

All claims will be assessed on a case by case basis," Ausgrid's reply read.   Although Michael believed his details were already recorded on a life support register with EnergyAustralia, he went online again to re-register, and was told his details would be sent to Ausgrid the next day.

Mary said it was not until she went on Twitter and started tweeting about her situation on February 14, six days after the power first went out, that she received a proper response and her case was escalated.

"It was only when I got on Twitter that they wanted to help. They ran a temporary line to my house within about six hours of my Tweets and we had power back," Mary said.

"Ausgrid apologises to Michael and Mary for the delay in providing them vital information during the recent storms," a spokesperson for Ausgrid said.

"As soon as Ausgrid was made aware of their situation we took action immediately to support them."

The spokesperson said that Michael had not been registered as a life support customer, and the registration was only received by them after the storms, when he re-lodged it.

"While all registered Life Support Customers receive proactive and immediate information from Ausgrid in these type of events, Michael and Mary did not receive these updates because their status as a life support customer (lodged with their electricity retailer), was received after the storm had commenced," the spokesperson said.

The spokesperson said Ausgrid was now working towards adding new life support customers to their system in real time to prevent situations such as Michael and Mary's happening again.

During the course of the outage, Ausgrid said it had sent 3,900 SMS messages and made more than 1,541 phone calls, as well as conducting door knocking and welfare checks for life support customers.

A spokesperson for the Australian Energy Regulator said Ausgrid had been made subject to new rules when it came to its life support customers.

"Customers must be provided with information to assist them to prepare a plan of action in the case of an unplanned interruption, including emergency contact details for their retailer and distributor – the cost of which must not be more than the cost of a local call," the spokesperson said.

Customers who rely on medical equipment should register their contact details with their retailer or can do so directly with Ausgrid by calling 13 13 65.