(Reuters) ― The former Atlanta police officer who shot and killed Rayshard Brooks last week was previously reprimanded for use of force involving a firearm, according to records released to Reuters by the city’s police department on Tuesday.The r…

(Reuters) ― The former Atlanta police officer who shot and killed Rayshard Brooks last week was previously reprimanded for use of force involving a firearm, according to records released to Reuters by the city’s police department on Tuesday.

The records show Garrett Rolfe received a written reprimand in October 2017 for a firearm incident in September 2016, his sole use-of-force complaint in seven years on the force prior to Friday’s shooting. No further details were disclosed.

Rolfe was fired from the department after the shooting in the parking lot of a Wendy’s fast-food restaurant, which was captured by body and surveillance cameras. A second officer at the scene, Devin Brosnan, who is also white, was placed on administrative duty.

The death of 27-year-old Brooks, which came after he tussled with Rolfe and Brosnan and took off running with one of their Taser guns, was the latest killing of a black man to spark nationwide outrage at police brutality and racial injustice.

An autopsy conducted on Sunday showed that Brooks died from blood loss and organ injuries and ruled the death a homicide. 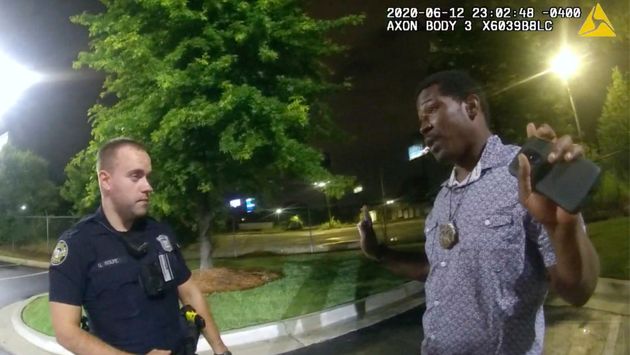 Fulton County District Attorney Paul Howard has said he would decide by midweek whether to bring charges against the officers, a call that he indicated would hinge on whether they felt Brooks posed a threat.

Justin Miller, an attorney for Brooks’ family, told CNN on Tuesday he did not think the officers’ defense could rest on a Georgia law that allows them to shoot if they were in imminent threat of bodily harm, even though Brooks had a Taser.

“If you look at the tape closely, you can see that police officer was already going for his gun before Mr. Brooks turned around,” Miller said. “I don’t think in this situation that’s going to come up.”

Rolfe’s disciplinary file lists 12 incidents, composed of five vehicle accidents, four citizen complaints, and three involving firearms, including one in 2015, the 2016 matter for which he received a written reprimand and the Brooks’ shooting.

Internal investigations exonerated him in eight of the incidents. He received a written reprimand and an oral admonishment for two vehicle accidents. The file does not indicate any conclusion for the 2015 firearm incident.

Vince Champion, southeast regional director for the International Brotherhood of Police Officers, said two firearm incidents over seven years prior to the Brooks’ shooting did not represent a pattern given the inherent dangers of the job.

“It doesn’t raise any flags for me,” Champion said, noting that Rolfe was not charged in any of the firearm incidents, which he said would have been vetted by the Georgia Bureau of Investigation and internal affairs before being resolved.

Brosnan, who joined the police force in 2018, has no disciplinary history.

Reporting by Nathan Layne in Wilton, Connecticut, and Gabriella Borter in New York; Editing by Steve Orlofsky and Jonathan Oatis