Storms that killed at least 30 people in America’s southeast, piling fresh misery atop a pandemic, spread across the eastern United States on Monday, leaving more than 1 million homes and businesses without power amid floods and mudslides.

Storms that killed at least 30 people in America's southeast, piling fresh misery atop a pandemic, spread across the eastern United States on Monday, leaving more than 1 million homes and businesses without power amid floods and mudslides.

In Alabama, people seeking shelter from tornadoes huddled in community shelters, protective masks covering their faces to guard against the new coronavirus. A twister demolished a Mississippi home save for a concrete room where a married couple and their children survived unharmed, but 11 others died in the state.

About 137 kilometres from Atlanta in the mountains of north Georgia, Emma and Charles "Peewee" Pritchett laid still in their bed praying as a suspected twister splintered the rest of their home.

"I said, 'If we're gonna die I'm going to be beside him,'" the woman said Monday. Both survived without injuries.

Nine died in South Carolina, Gov. Gov. Henry McMaster said, and eight were killed in Georgia. Others died under falling trees or inside collapsed buildings in Arkansas and North Carolina.

With a handful of tornadoes already confirmed in the South and storms still raging up the Eastern Seaboard, forecasters fanned out to determine how much of the widespread damage was caused by twisters.

The storms blew onward through the night, causing flooding and mudslides in mountainous areas, and knocking out electricity for nearly 1.3 million customers in a path from Texas to Maine, according to poweroutages.us.

READ:  Cause of death of woman found slain in UK woods revealed

As much as 15 centimetres of rain fell over the weekend in the Tennessee Valley. The Tennessee Valley Authority said it expected to conduct water releases to regulate water levels in swollen lakes and rivers in Tennessee and Alabama.

In southeast Mississippi, Andrew Phillips crowded into a closet-sized "safe room" with his wife and two sons hours after watching an online Easter service because the pandemic forced their church to halt regular worship. Then a twister struck, shredding their house, meat-processing business and vehicles in rural Moss, Mississippi. The room, built of sturdy cinder blocks, was the only thing on their property left standing. 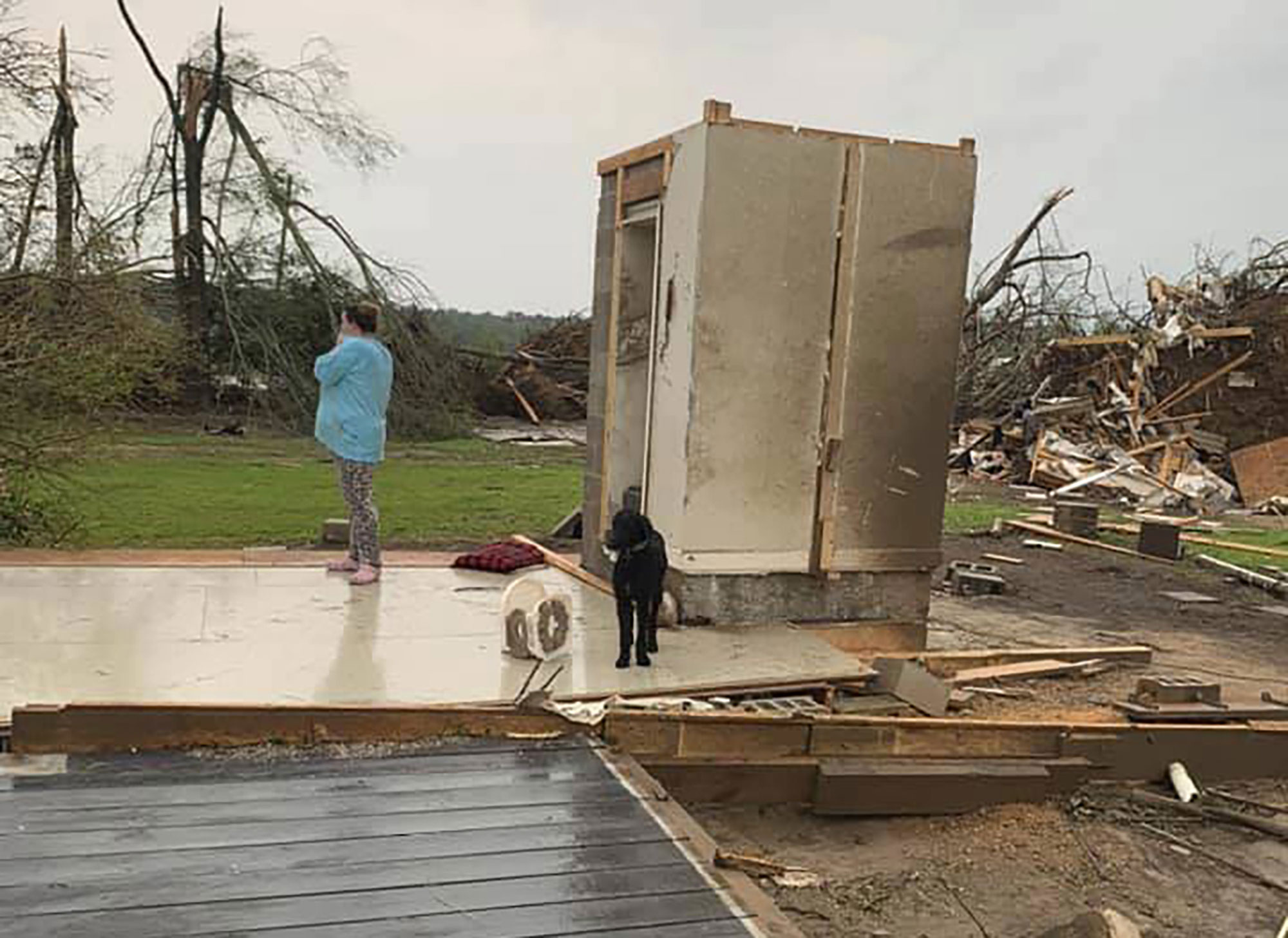 "I'm just going to let the insurance handle it and trust in the good Lord," said Phillips.

The National Weather Service tallied hundreds of reports of trees down across the region, including many that punctured roofs and downed power lines. Meteorologists warned the mid-Atlantic states to prepare for potential tornadoes, wind and hail. The storms knocked down trees across Pennsylvania, and an apparently strong tornado moved through southern South Carolina, leaving chaos in its wake.

"Everything is up in the air. Power lines are down, trees are all over the place. It's hard to get from one place to the other because the roads are blocked," Hampton County Sheriff T.C. Smalls said. 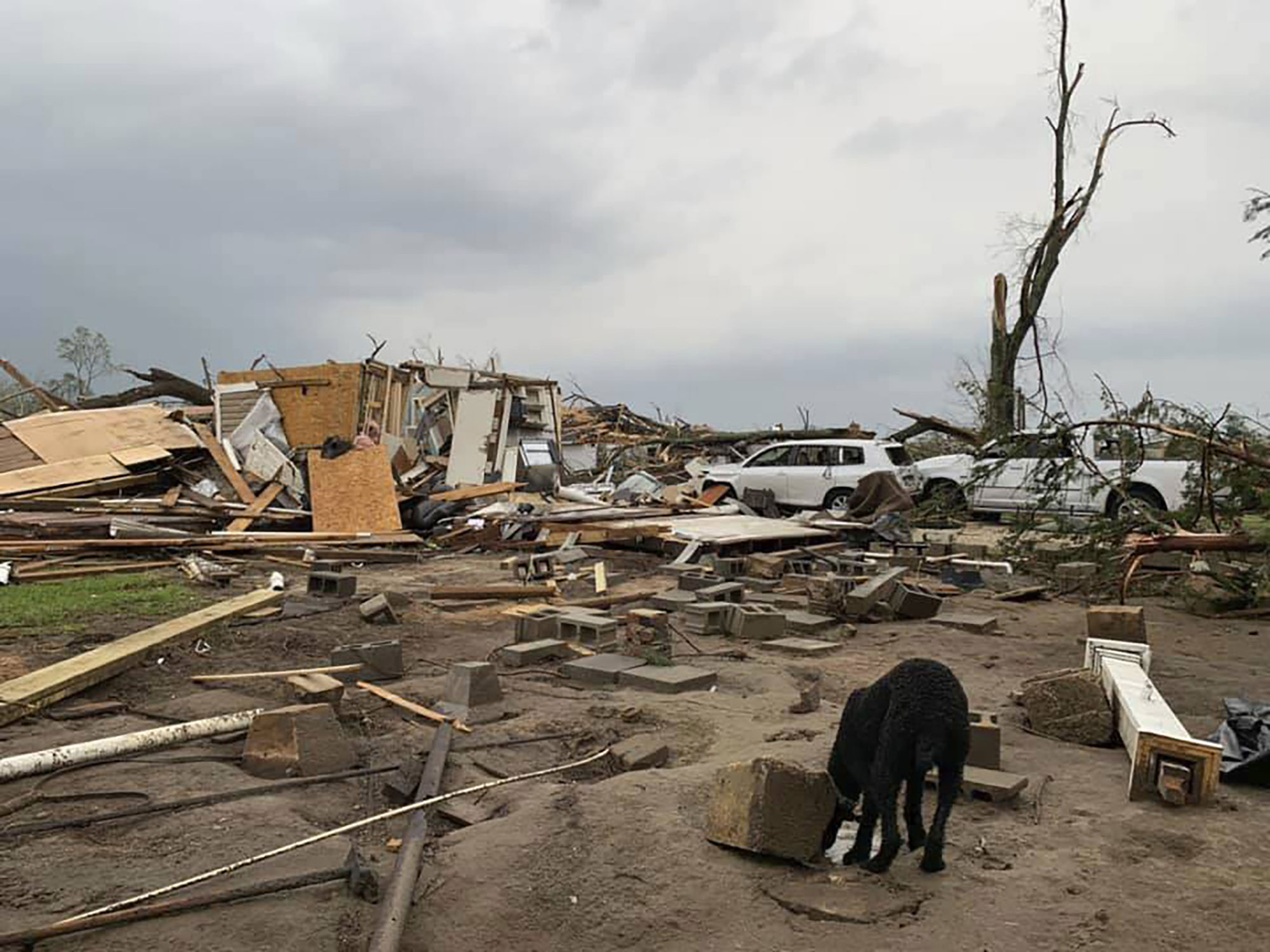 A suspected twister lifted a house, mostly intact, and deposited it in the middle of a road in central Georgia. In Louisiana, winds ripped apart a metal airplane hangar.

In northwest Georgia, a narrow path of destruction 8 kilometres long hit two mobile home parks. A terrified David Baggett of Chatsworth survived by cowering with his children in the bathtub of his mobile home, which was cut in two by a falling tree.

"It got quiet and then the wind started coming in really fast," said Baggett, 33.

To the north in Chattanooga, Tennessee, at least 150 homes and commercial buildings were damaged and more than a dozen people treated, but none of their injuries appeared to be life-threatening, Chattanooga Fire Chief Phil Hyman said.

"It's widespread damage that happened extremely fast, " Hyman said. "I advise people to stay in their homes at this point. As far as safety is concerned, we still have active power lines that are down."

"Robert left this world a hero, as he shielded Mrs. Paula during the tornado," said a Facebook message by the sheriff's office.

There were no immediate reports of serious injuries in Louisiana, even though the storm damaged between 200 and 300 homes in and around the city of Monroe, Mayor Jamie Mayo, told KNOE-TV. Flights were cancelled at Monroe Regional Airport, where airport director Ron Phillips told the News-Star the storm caused up to $30 million in damage to planes inside a hangar.

In north Alabama, where lightning struck Shoal Creek Baptist Church shortly after noon Sunday, catching the tall, white steeple on fire, pastor Mahlon LeCroix said the building would have been full of more than 200 people at the time had the pandemic not forced him to switch to online services.

"It turned out to be a blessing," he said.

READ:  George Clooney: Racism Is Our Pandemic And In 400 Years We’ve Yet To Find A Vaccine