A senior Chinese health official said Monday the new coronavirus strain that has left hundreds sick and at least three people dead can be transmitted by human-to-human contact, prompting concerns that it could spread far more quickly as hundreds of mil…

A senior Chinese health official said Monday the new coronavirus strain that has left hundreds sick and at least three people dead can be transmitted by human-to-human contact, prompting concerns that it could spread far more quickly as hundreds of millions of people in China prepare to travel this week for Lunar New Year.

Zhong Nanshan, who is well-known in China for his work fighting Severe Acute Respiratory Syndrome, or SARS, in 2003, told China’s state-run Xinhua News Agency that two people had been infected with the coronavirus from family members. Chinese officials had said that at least 217 cases of the new virus had been reported as of Monday evening, predominantly in the city of Wuhan, where the first case was traced to a seafood market.

“The current cases show there is definitely human-to-human transmission,” Zhong, the head of a team established by China’s National Health Commission to investigate the virus, told the state-run CCTV. Officials had initially said the virus appeared to spread primarily through contact with animals.

Coronavirus is a large family of viruses and causes a type of pneumonia with symptoms that include fever and difficulty breathing. The English-language China Daily said Tuesday at least 15 medical workers in Wuhan had already been diagnosed with pneumonia linked to the coronavirus. One staff member was in critical condition. 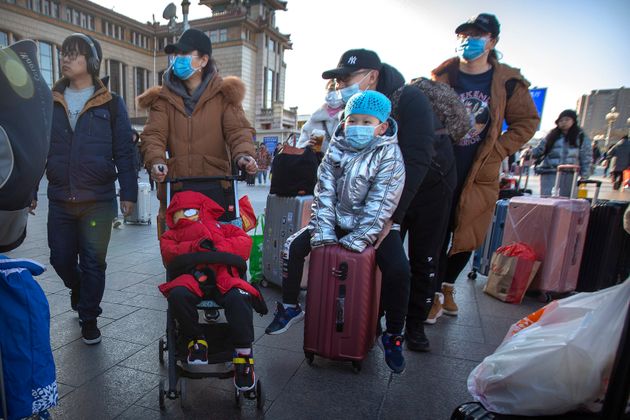 Chinese President Xi Jinping urged officials to take the outbreak seriously in his first public comments on the matter, saying “party committees, governments and relevant departments at all levels should put people’s lives and health first,” The Associated Press reported.

Zhong expressed confidence that the new coronavirus would not be as dangerous as SARS, which killed nearly 800 people globally during the outbreak. The official said it only took two weeks to identify the new virus and China had quarantine systems that would help control its spread.

But the outbreak has already prompted global fear the virus could spread, particularly as hundreds of millions of people in China begin traveling for the Lunar New Year holiday this week. The Washington Post notes that Chinese officials expect 3 billion trips to be taken in the 40-day period surrounding Lunar New Year’s Day, which is this Saturday.

Infections have already been reported domestically in Beijing, Shanghai and Guangdong. Internationally, there have been cases in Thailand, Japan and South Korea.

Authorities have begun screening airline passengers traveling from Wuhan to airports in Australia, Japan, Singapore and the United States — including in New York and Los Angeles.

The World Health Organisation has convened an emergency committee that will meet this Wednesday to determine if the spread of the coronavirus amounts to an international health emergency, Reuters reported. The declaration has recently been used for the ongoing Ebola outbreak in Congo and the rise of the Zika virus in 2016.

The U.N.’s health agency has not yet recommended any travel restrictions or guidance for the new coronavirus.

Within the US, the Centers for Disease Control and Prevention said it was “closely monitoring” the spread of the virus, but said there is “much more to learn” about how it is transmitted.

“More cases may be identified in the coming days, including more in countries outside China, and possibly in the United States,” the agency said. “Given what has occurred previously with MERS and SARS, it’s likely that some limited person-to-person spread will continue to occur.”