View this post on Instagram A post shared by F R A N K I E (@frankieshebby)
One of our favorite things about Aaron Rodger and Shailene Woodley’s relationship is the fact we never know what’s going to happen next. On May 1, the coupl… 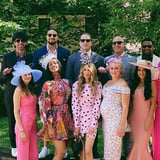 One of our favorite things about Aaron Rodger and Shailene Woodley’s relationship is the fact we never know what’s going to happen next. On May 1, the couple was seen out with friends at the 2021 Kentucky Derby. The most surprising thing about this group wasn’t how Aaron was dressed or that it consisted primarily of his current and former Green Bay Packer pals, it was the fact that Miles Teller got the invite. Is anyone else as invested in the hope that Aaron and Miles become best friends because of Shailene? Just us?

Yes, Shailene and Miles have starred in four films together, including the Divergent series and The Spectacular Now, but who knew they still hung out? Then again, it is comforting to know that they’re still good friends. Now we’re wondering how Shailene introduced Aaron to Miles. He did play her love interest, and people once thought they were dating prior to his marriage to model Keleigh Sperry Teller, who was also in on the festivities. Then again, Miles has also played Shailene’s brother (and acting is their job). So does it actually matter? Either way, we hope double dates are in the foursome’s future because this is a friend group we can get behind.

READ:  Why Casting Someone Outside of the Bachelor Universe as a Lead Should Be the New Standard
Shares
Share This
Finance Advice 2021