Thousands of people took to the streets of European cities to show their support for the Black Lives Matter movement.

Thousands of people took to the streets of European cities Sunday (local time) to show their support for the Black Lives Matter movement, with protesters in the English port of Bristol venting their anger at the country's colonial history by toppling a statue of a 17th-century slave trader.

Demonstrators attached ropes to the statue of Edward Colston before pulling it down to cheers and roars of approval from the crowd. 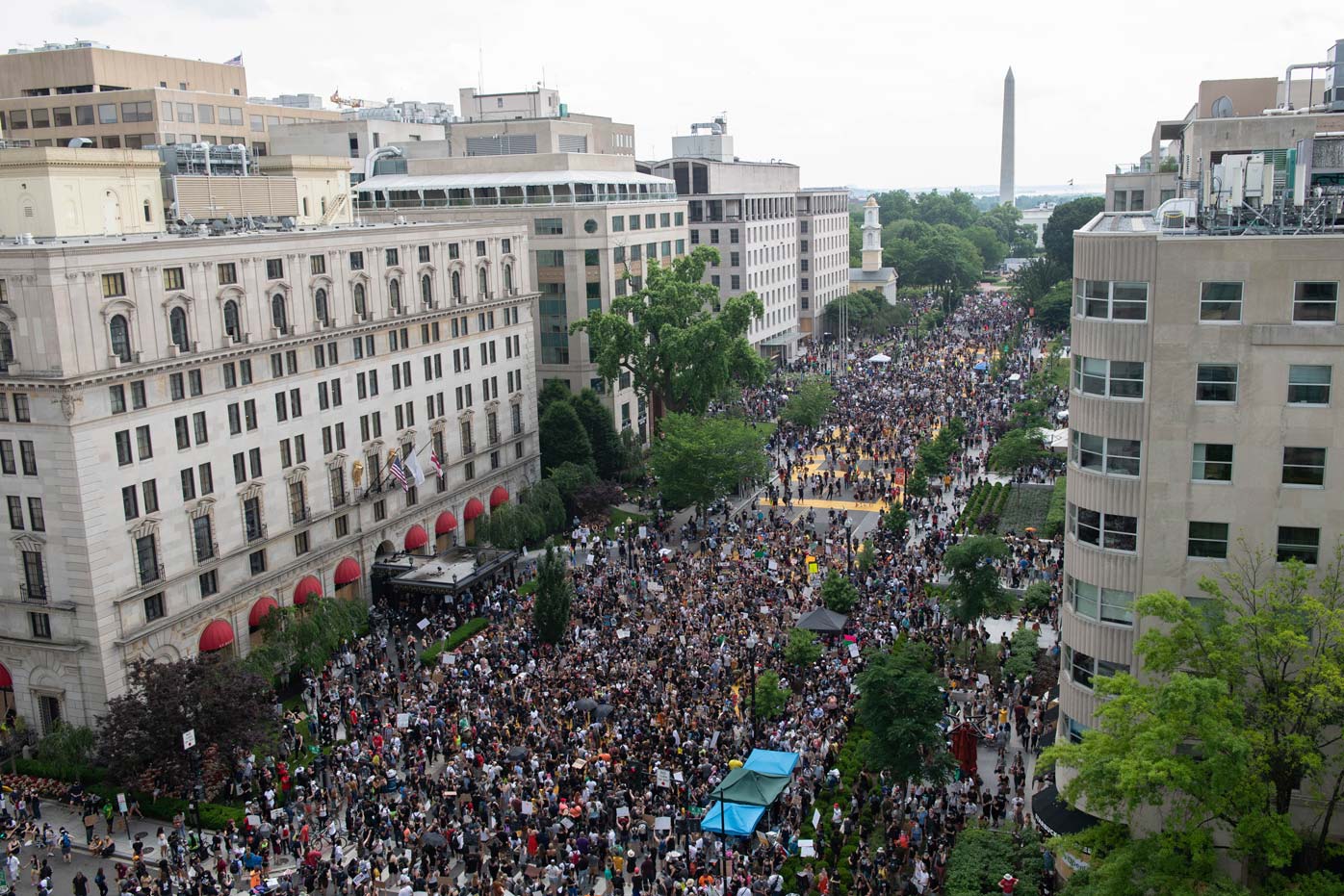 Images on social media show protesters appearing to kneel on Colston's neck, recalling the death of George Floyd in Minnesota on May 25 that has sparked worldwide protests against racism and police violence.

Floyd, a black man, died after a white Minneapolis police officer pressed a knee on his neck even after he pleaded for air while lying handcuffed on the ground.

In London, thousands of people congregated around the US Embassy for the second day running, making clear their message wasn't just aimed at America.

"Everyone knows that this represents more than just George Floyd, more than just America, but racism all around the world," Darcy Bourne, a London-based student, said.

Protesters, many of whom were wearing face masks to protect themselves from the coronavirus, were "using this time when they're out of work to unite and come together and make a change because it's been like this for too long now", she said.

Following clashes on Saturday at another demonstration in central London that saw 14 police officers injured, there were concerns that Sunday's demonstration might take a violent turn.

London Mayor Sadiq Khan said violence was "simply not acceptable" and urged those protesting to do so lawfully while also maintaining social distancing by remaining two metres apart. But most demonstrators didn't heed that call, packing themselves tightly in front of the US Embassy.

READ:  US man beats back wildfire with carton of beer 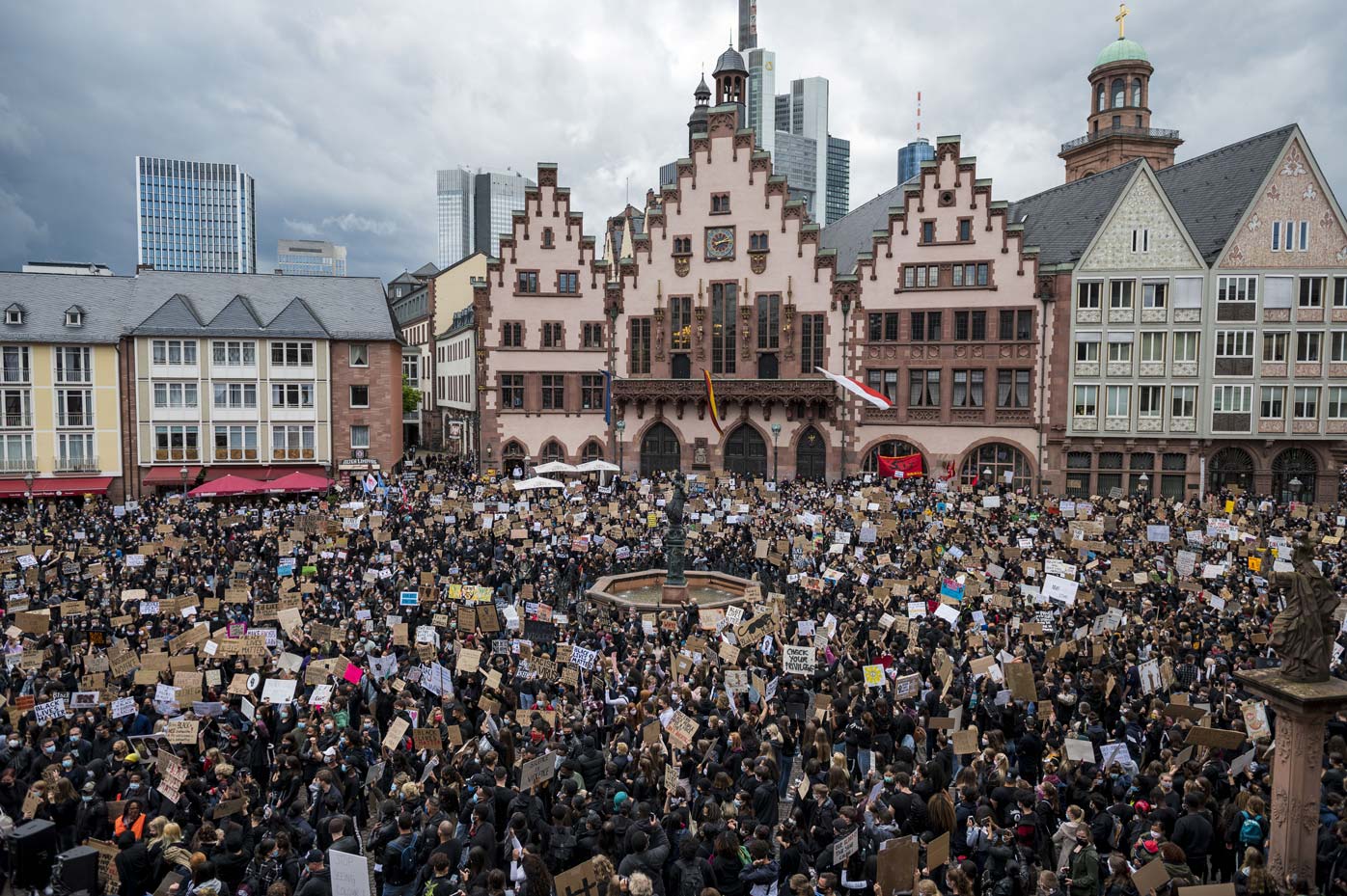 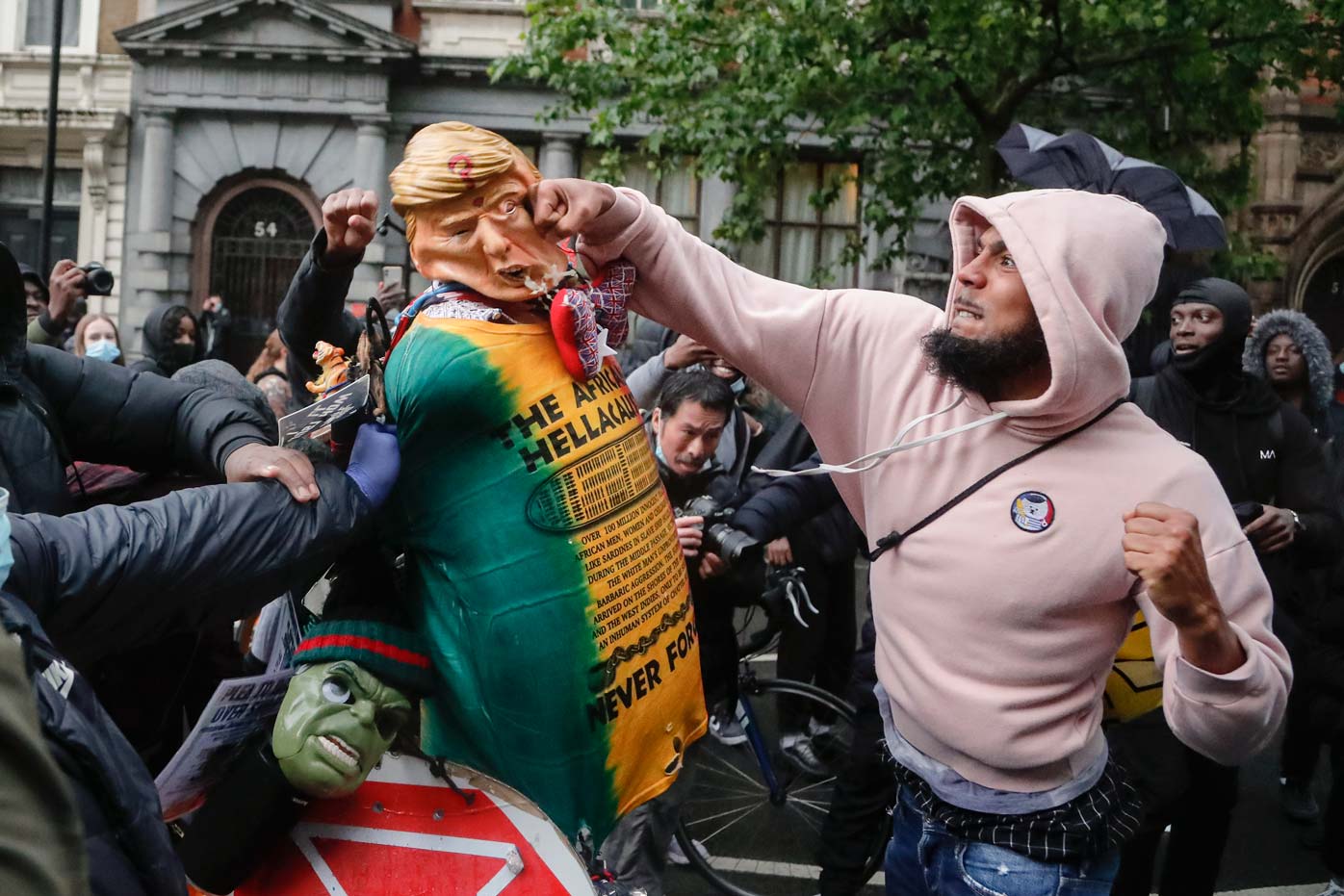 Video footage online showed one mounted police officer colliding with a traffic light and striking the pavement before her horse bolted away. Police said the officer was hospitalised and her injuries weren't life-threatening.

Hundreds of people also formed a densely packed crowd Sunday in a square in central Manchester, kneeling in silence as a mark of respect for George Floyd.

In Hong Kong, about 20 people staged a rally in solidarity with the Black Lives Matter movement on Sunday outside the US Consulate in the semi-autonomous Chinese city.

"We have to remind ourselves despite all we see going on in the US and in the other parts of the world, black lives do indeed matter."

Organisers called off the Hong Kong rally late Saturday because of the city's coronavirus restrictions. Those that still showed up gathered in groups of eight to follow size limits on public gatherings. 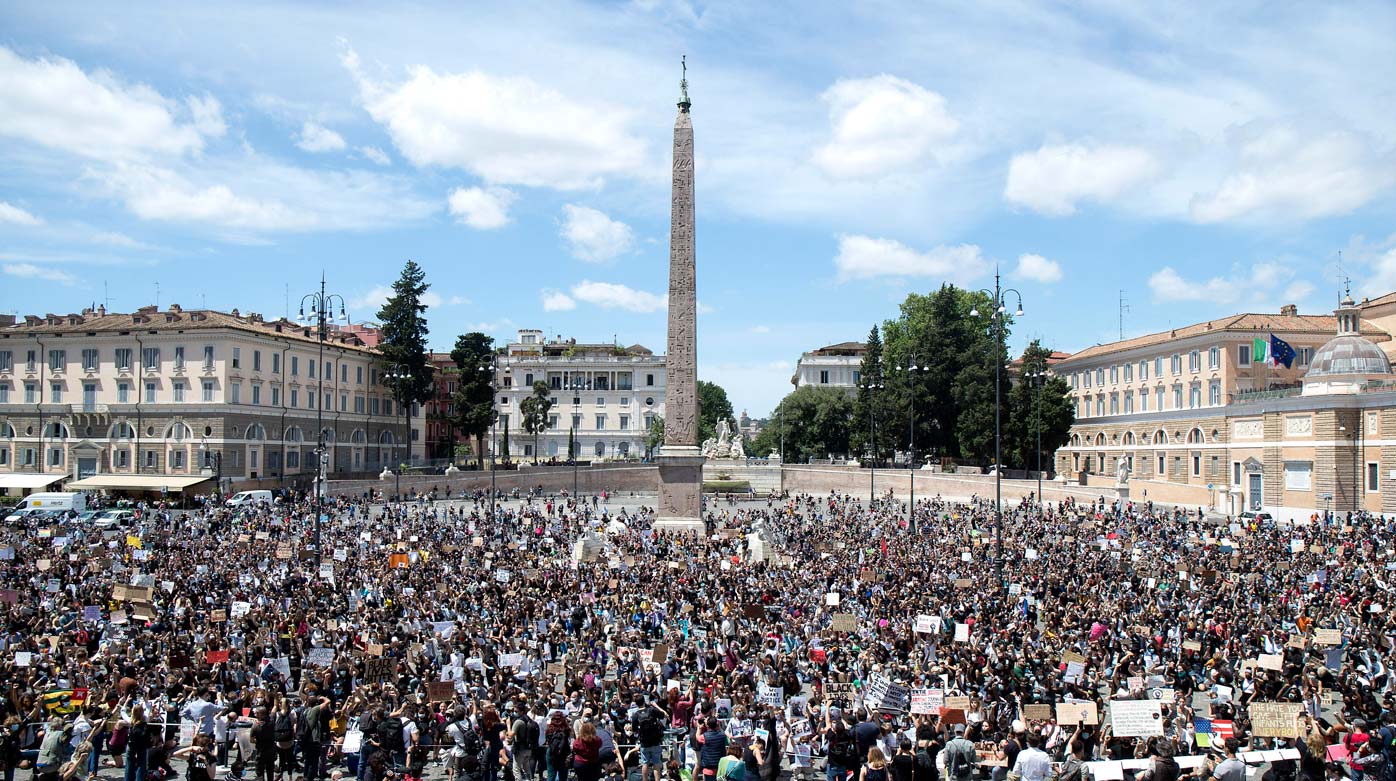 A rally in Rome's sprawling People's Square was noisy but peaceful, with the majority of protesters wearing masks to protect against coronavirus.

Participants listened to speeches and held up handmade placards saying "Black Lives Matter" and "It's a White Problem".

Among those present was 26-year-old Ghanaian Abdul Nassir, who is studying for a master's in business management at one of the Italian capital's public universities.

"It's quite unfortunate, you know, in this current 21st century that people of colour are being treated as if they are lepers," Mr Nassir told The Associated Press. He said he occasionally has felt racist attitudes, most notably when riding the subway.

"Maybe you're finding a place to stand, and people just keep moving (away) and you'll be, like, 'What?'"

Mr Nassir said: "We're strong people but sometimes everyone has a limit."

At one point, the protesters, most of them young and some with children or siblings, took the knee and raised a fist in solidarity with those fighting racism and police brutality.

In Italy's financial capital, Milan, a few thousand protesters gathered in a square outside the central train station Sunday afternoon. Many in the crowd were migrants or children of migrants of African origin. 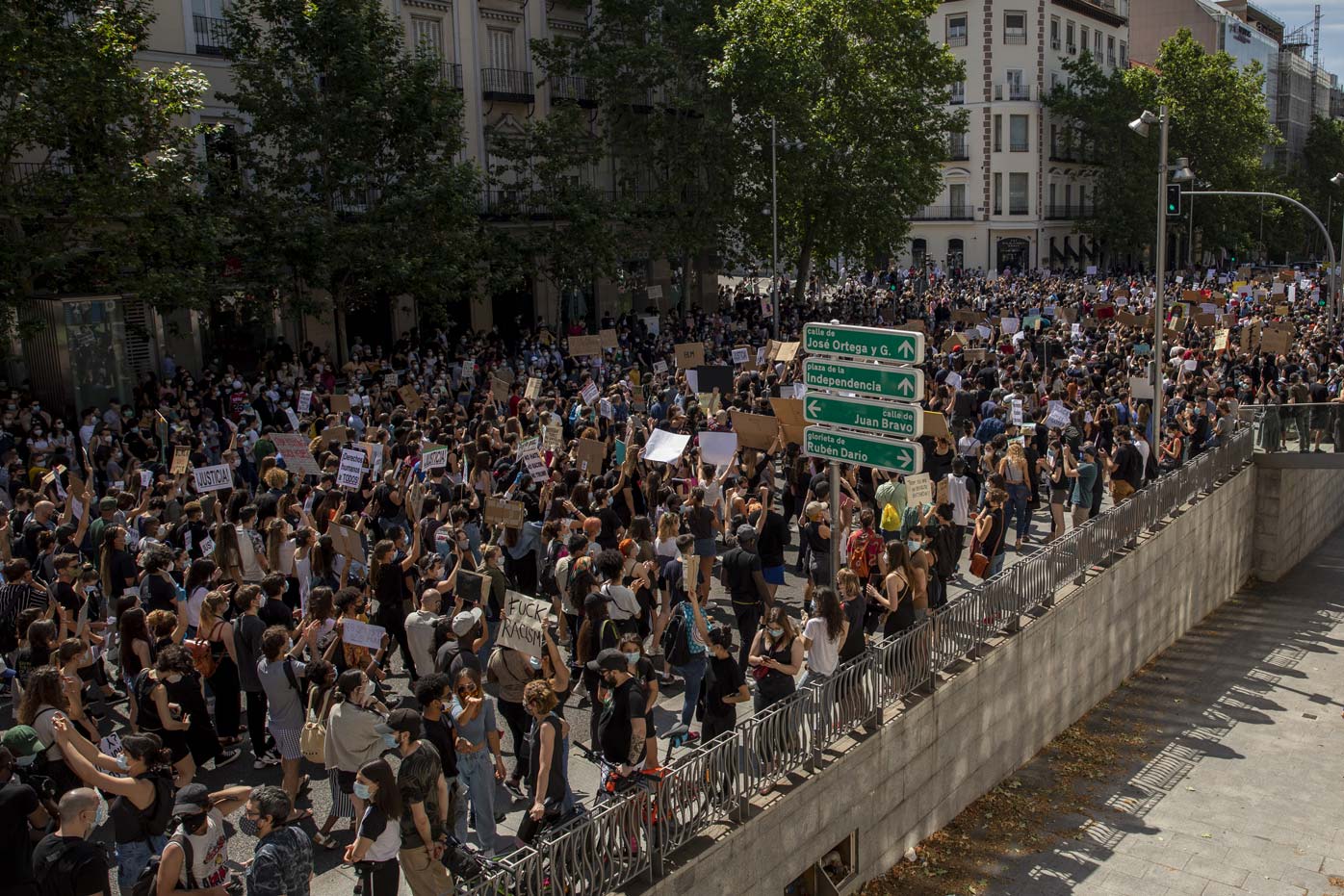 Organisers told participants that, in Italy, the Black Lives Matter slogan means "avoid seeing black bodies as if they're foreigners" and not as citizens.

One participant held a cardboard sign written in English, reading, "I Fight For My Kids".

One of those addressing the crowd said that in Italy, Black Lives Matter means not delaying legislative reform to make it easier to receive citizenship.

Foreigners born in Italy aren't automatically eligible for citizenship until they reach 18 after continuously living in the country.

Parents complain that their children, although identifying as Italian and speaking fluent Italian, are viewed as second-class citizens.

In Spain, several thousand protesters gathered on the streets of Barcelona and at the US Embassy in Madrid.

Many in Madrid carried homemade signs reading "Black Lives Matter," "Human rights for all" and "Silence is pro-racist".

Protesters chanted "Police murderers!" and "No justice, no peace!" 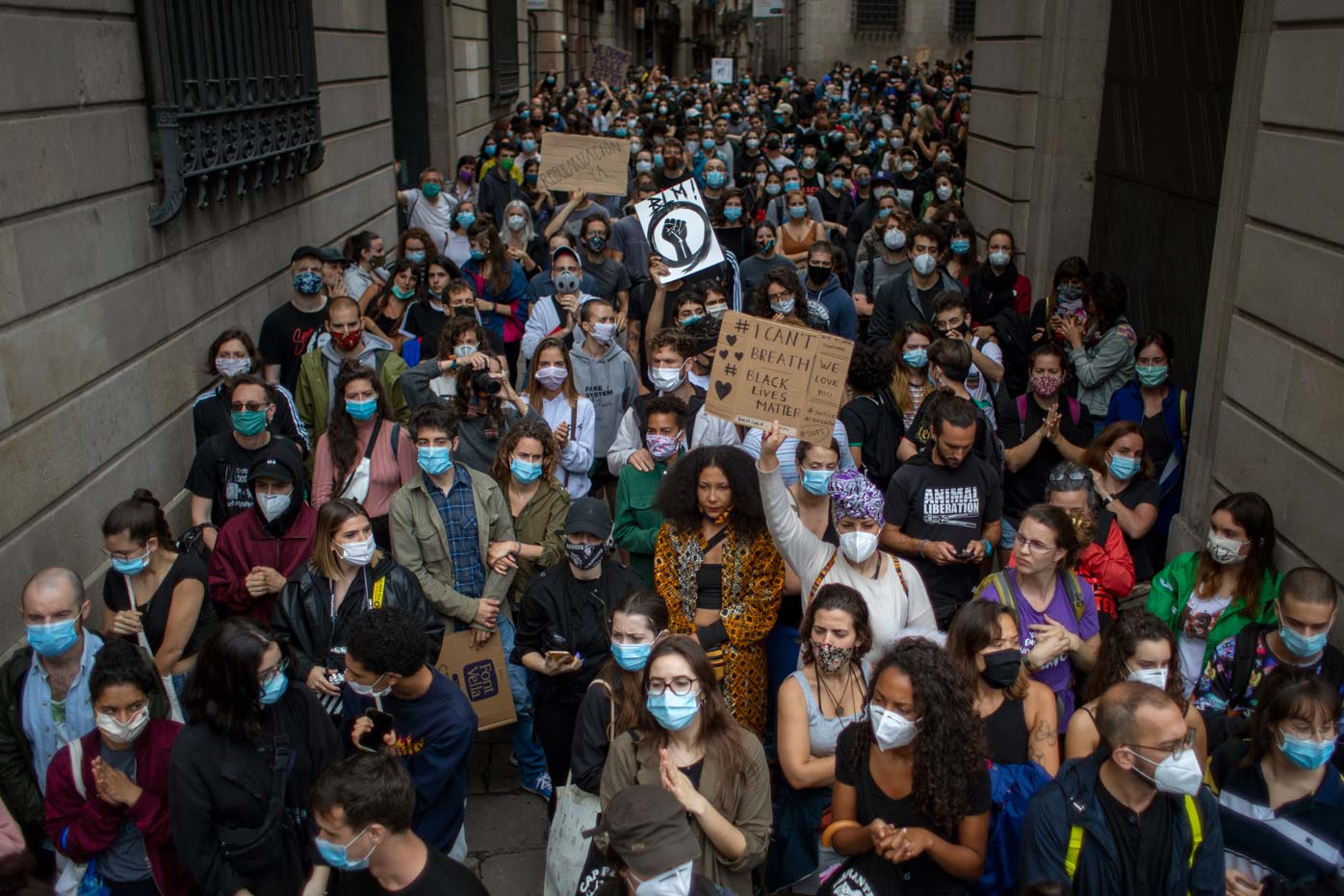 Police were present but the atmosphere remained peaceful. The turnout meant that social distancing was difficult, though face masks were ubiquitous.

"We are not only doing this for our brother George Floyd," Thimbo Samb, a spokesman for the group that organised the events in Spain mainly through social media, said.

"Here in Europe, in Spain, where we live, we work, we sleep and pay taxes, we also suffer racism."