Video showing a group of mask-less demonstrators parading through a Target store in Florida and hollering at customers take off their masks has gone viral on social media.The video, apparently taken by someone shopping in the store, popped up&nbsp…

Video showing a group of mask-less demonstrators parading through a Target store in Florida and hollering at customers take off their masks has gone viral on social media.

The video, apparently taken by someone shopping in the store, popped up on Reddit, and later on Twitter. It shows some protesters wearing red MAGA shirts or hats and bellowing, “Take it off.”

One participant was Cristina Gomez, who shared a livestream of the protest as she marched through the Target in Ft. Lauderdale on Tuesday.

In the livestream, Gomez and others in the group can be heard shouting, “Take your mask off!” and cheering on customers to join them. They blasted the song “We’re Not Gonna Take It” by Twisted Sister.

“If an infant doesn’t wear a mask, then no one should wear a mask,” says Gomez in her livestream, before adding: “People looking at us like, ‘What’s going on?’ Isn’t it crazy how people now look at me like we crazy because we don’t have a mask on? I think y’all crazy for having a mask.”

Neither Gomez nor Target immediately answered HuffPost’s requests for comment.

Another protester, Nathan Babcock, told HuffPost that he thought it was successful and plans to join similar events in the future.

Babcock said he joined a protest at the store because “all our city halls are closed” and he wanted to express himself: “We have no voice in what is being done to us. That’s why we have had to organise and protest the lockdown,” he said.

Before the protest, Gomez had promoted it with a graphic on her Facebook page, calling it an “anti mask flash mob.” 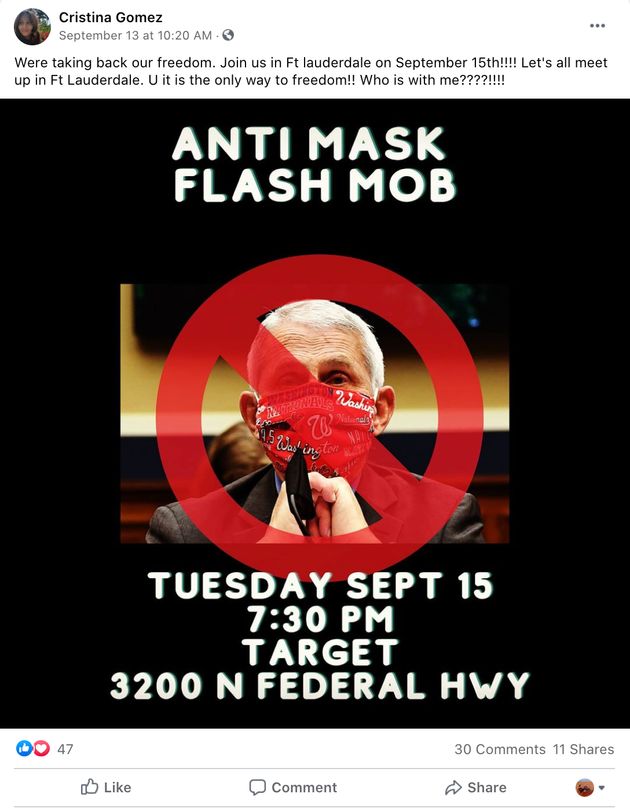 Target, like many retail chains, requires shoppers to wear masks or face coverings, except for those with medical conditions and for young children. The store where the anti-mask protest was held greeted telephone callers with a recorded reminder that face masks are required and that disposable masks will provided if needed.

Gomez made waves in June at a public meeting of Palm Beach County commissioners, where she gave an animated speech against the local mask mandate.

This angry Florida woman argued today against the mask mandate, while bringing up the devil, 5G, Bill Gates, Hillary Clinton, "the pedophiles" and the deep state.

Currently, 34 states and the District of Columbia mandate face coverings in public spaces. Florida is not among them, but some localities in the state have mask requirements.

READ:  Labor calls for Royal Commission into mental health and suicide in NSW

Nearly 200,000 people have died from coronavirus in the United States. Florida has logged more than 12,700 deaths.

A HuffPost Guide To Coronavirus
Everyone deserves accurate information about COVID-19. Support journalism without a paywall — and keep it free for everyone — by becoming a HuffPost member today.