Barring a dramatic development, Republicans appear to have the votes to confirm the 48-year-old conservative appellate judge to a lifetime seat on the Supreme Court.

The Senate Judiciary Committee, meeting on a federal holiday, kicked off four days of statements and testimony in an environment that has been altered by the coronavirus pandemic. Some senators are taking part remotely and the hearing room itself has been arranged with public health concerns in mind. 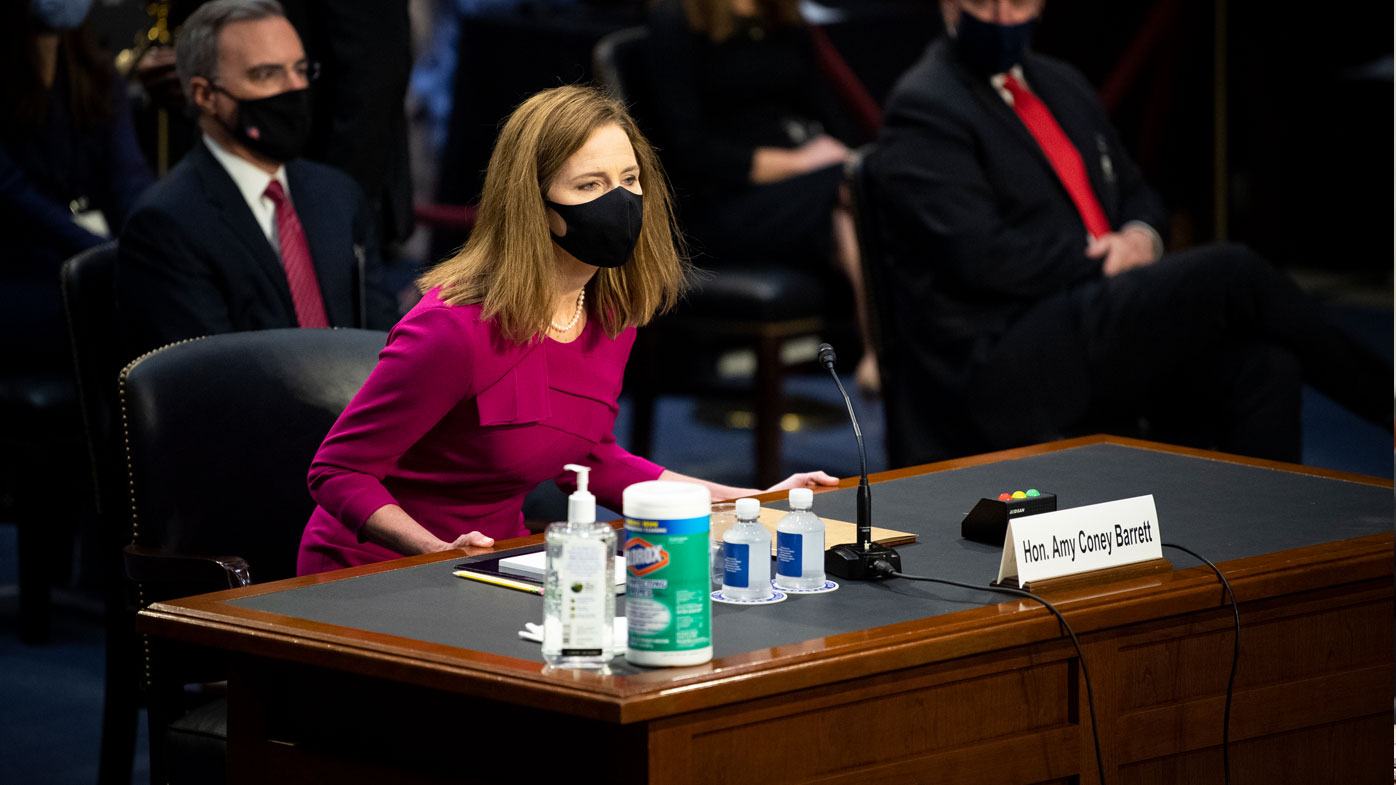 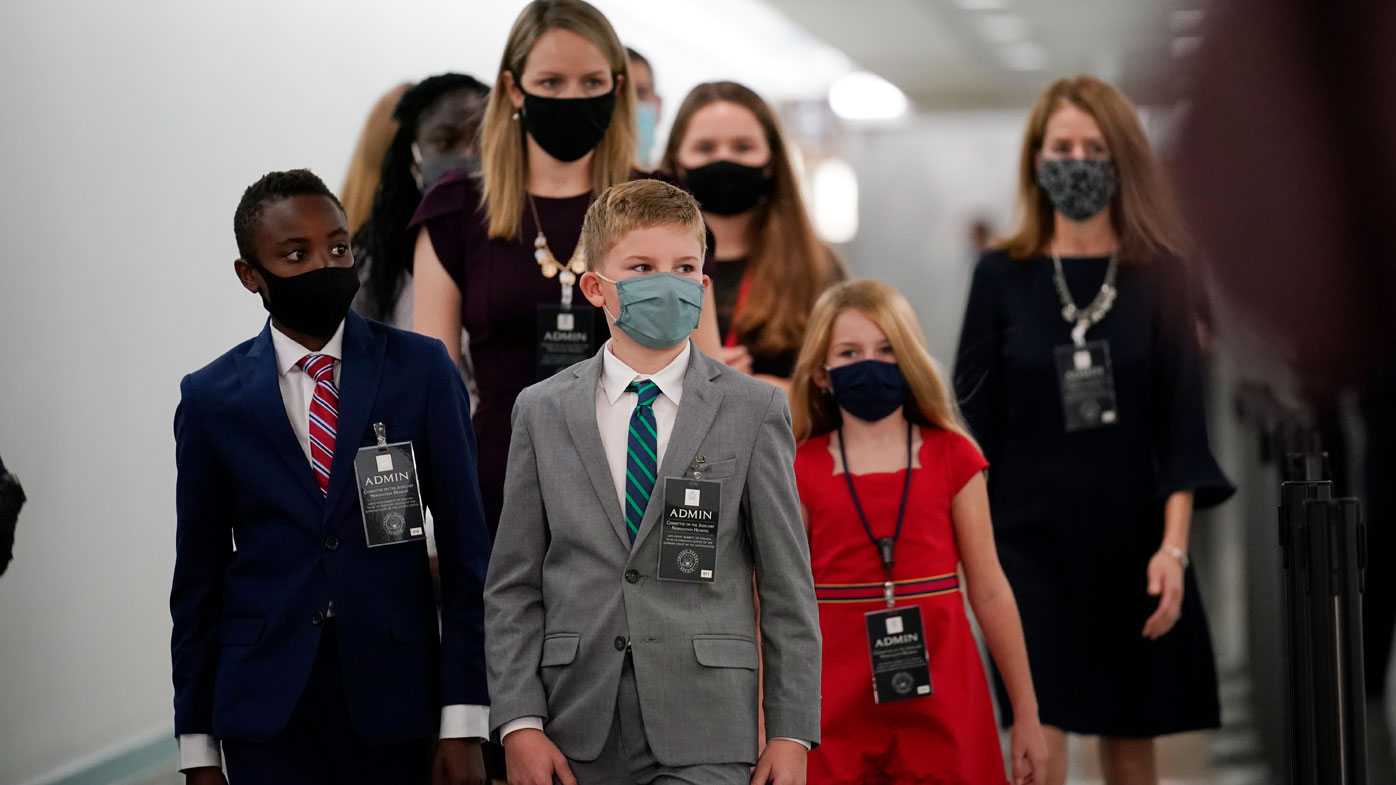 Republican Senator Lindsey Graham opened the hearing acknowledging "the COVID problem in America is real". But he said, "We do have a country that needs to move forward safely." Barrett was wearing a face mask, as were all the roughly 100 people in the cavernous hearing room.

Graham acknowledged the obvious: "This is going to be a long, contentious week."

Democrats wasted no time in trying to tie Barrett's nomination to a threat to the Affordable Care Act. If she is confirmed quickly Barrett could be on the Supreme Court when it hears the latest challenge to the law popularly known as "Obamacare" on November 10, a week after the election.

"Health care coverage for millions of Americans is at stake with this nomination," Senator Dianne Feinstein of California, the committee's senior Democrat, said.

Barrett, a federal appeals court judge, will tell senators that she is "forever grateful" for Ginsburg's trailblazing path as a woman. But she is resolved to maintain the perspective of her own mentor, the late conservative Justice Antonin Scalia and "apply the law as written," according to her prepared opening remarks for the hearings, which start Monday as the country is in the grips of the coronavirus pandemic.

READ MORE: Support shift among seniors may be major warning to Trump in election 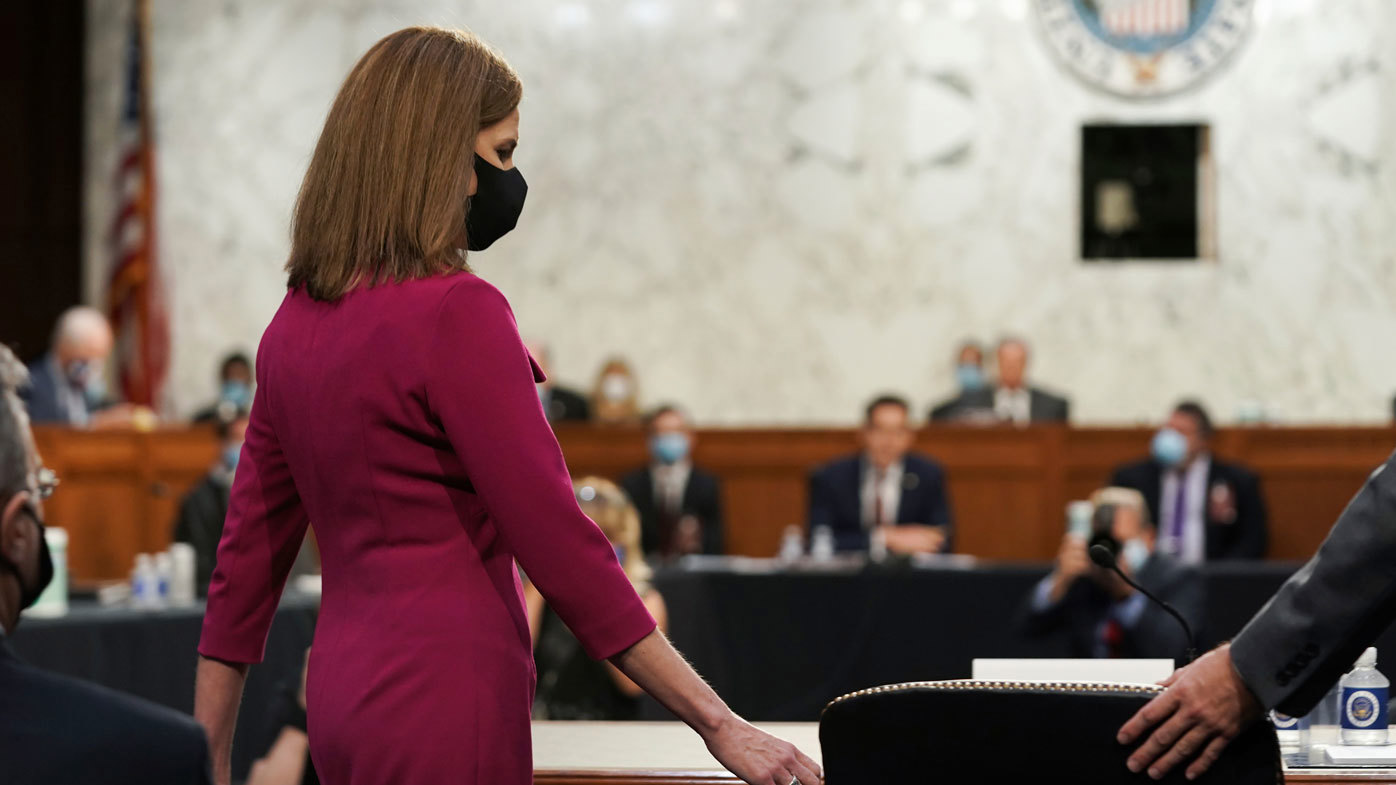 "Courts are not designed to solve every problem or right every wrong in our public life," Barrett says in the remarks, which The Associated Press obtained.

Republicans are moving at a breakneck pace to seat Barrett before the November 3 election to secure Trump's pick, which would put her on the bench for any election-related challenges.

Democrats are trying in vain to delay the fast-track confirmation by raising fresh concerns about the safety of meeting during the pandemic after two GOP senators on the panel tested positive for the novel coronavirus.

Key Democrats are staying away. California Senator Kamala Harris, the Democratic vice presidential nominee and a committee member, plans to participate remotely from her Senate office due to coronavirus concerns, her spokesman said Sunday.

The committee released a letter from the Architect of the Capitol on Sunday that says the hearing room has been set up in consultation with the Office of Attending Physician with appropriate distance between seats and air ventilation systems that meet or exceed industry standards. 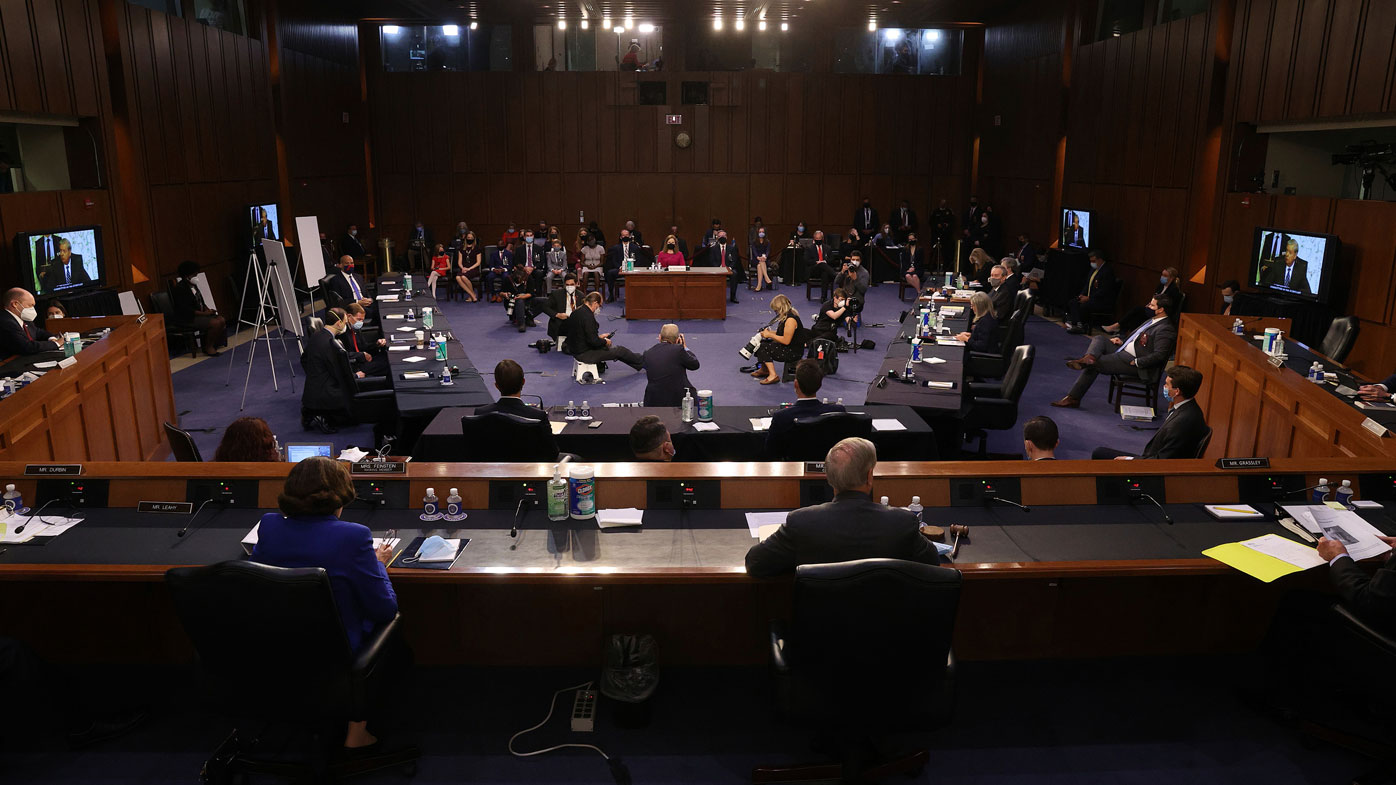 Graham said that the hearing room was "CDC-compliant." He said Sunday that he took a coronavirus test last week and is "negative."

READ:  Fauci slams 'inexplicable' loosening of COVID-19 restrictions in US

Trump chose Barrett after the death last month of Ginsburg, a liberal icon. It's the opportunity to entrench a conservative majority on the court for years to come with his third justice.

Outside groups are pushing Democrats to make a strong case against what they call an illegitimate confirmation, when people are already voting in some states, saying the winner of the presidency should make the pick. No Supreme Court justice has ever been confirmed so close to a presidential contest.

"The public is with them that this shouldn't happen before the election," said Brian Fallon, executive director of Demand Justice, which advocates against right-leaning nominees.

The country will get an extended look at Barrett over the next three days in hearings like none other during the heated election environment and the pandemic limiting public access.

Faith and family punctuate her testimony, and she said would bring "a few new perspectives" as the first mother of school-age children on the nine-member court.

Barrett says she uses her children as a test when deciding cases, asking herself how she would view the decision if one of her children were the party she was ruling against.

"Even though I would not like the result, would I understand that the decision was fairly reasoned and grounded in the law?" she says in the prepared remarks.

A Catholic, she says she believes in the "power of prayer." Barrett's religious views and past leadership role in a Catholic faith community pose a challenge for Democrats as they try to probe her judicial approach to abortion, gay marriage and other social issues without veering into inappropriate questions of her faith.

Ordinarily, Barrett would get to show off her family and seven children. But the White House event announcing her nomination, in which most of the audience did not wear masks, has been labeled a "superspreader" for the coronavirus.

More than two dozen people linked to the September 26 Rose Garden event, including the two GOP senators, have contracted COVID-19 since then. Barrett and her family went maskless at the event. She and her husband, Jesse, tested positive for the virus earlier this year and recovered, two administration officials have said.

Democrats already were enraged that Republicans are moving so quickly having refused to consider President Barack Obama nominee in February 2016, well before that year's election. 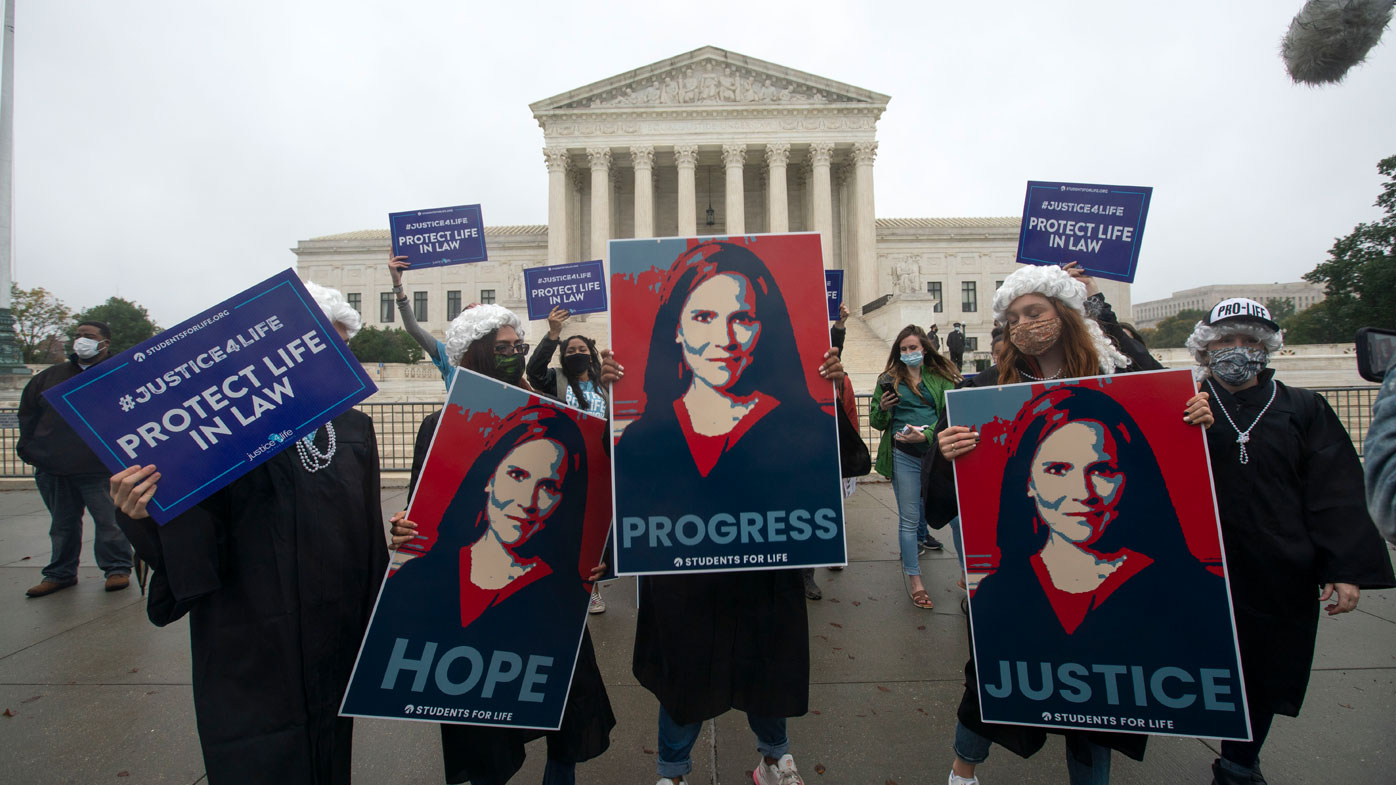 Barrett is the most openly anti-abortion Supreme Court nominee in decades and her vote could provide a majority to restrict if not overturn abortion rights. Democrats have made clear that they will press Barrett on health care, abortion and other issues where her vote could push the court further to the right.

Republicans will highlight Barrett's belief in sticking to the text of laws and the original meaning of constitutional provisions, both Scalia trademarks as well.