The biggest warehouse in Australia won't hold iron ore, steel or coal – it'll be filled with 11 million shopping products on the back of the country's e-commerce boom.

Amazon Australia today revealed the latest step in its mammoth robotics fulfillment centre at Western Sydney, as the building's shell is now complete and ready for internal fit-out.

The scale of the production is nothing short of grand. 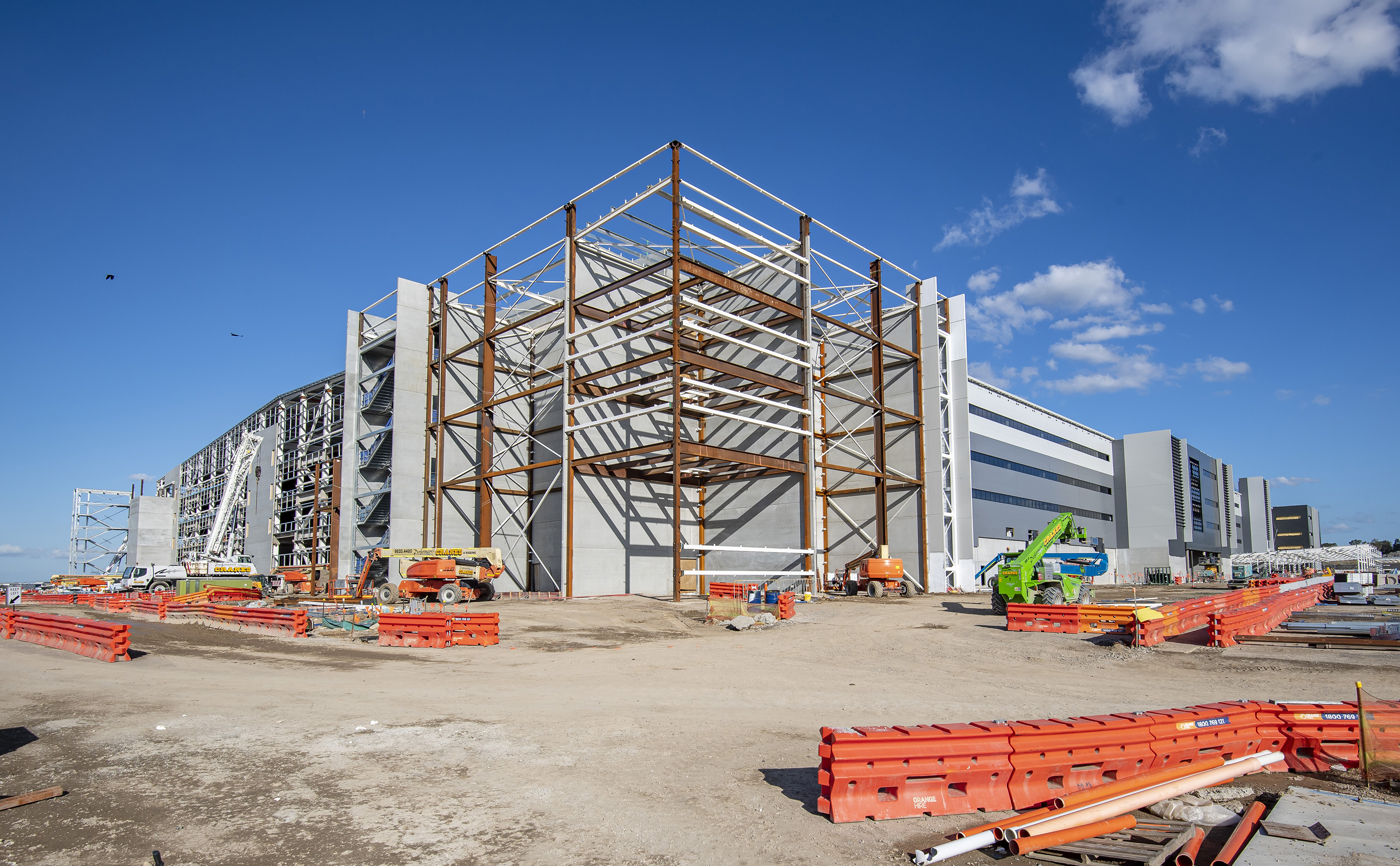 Spanning 200,000 square metres, the warehouse is the same size as 24 rugby league fields or double the size of Bondi Beach.

It was built with more than 13,500 tonnes of Australian steel – more than used in the making of the Eiffel Tower and some 3,000 tonnes more than was used to build Sydney's Olympic Park Stadium.

If the robotics centre carries on according to schedule, it will be complete by the end of the year and will represent a landmark investment by Amazon to conquer Australia's online shopping market. 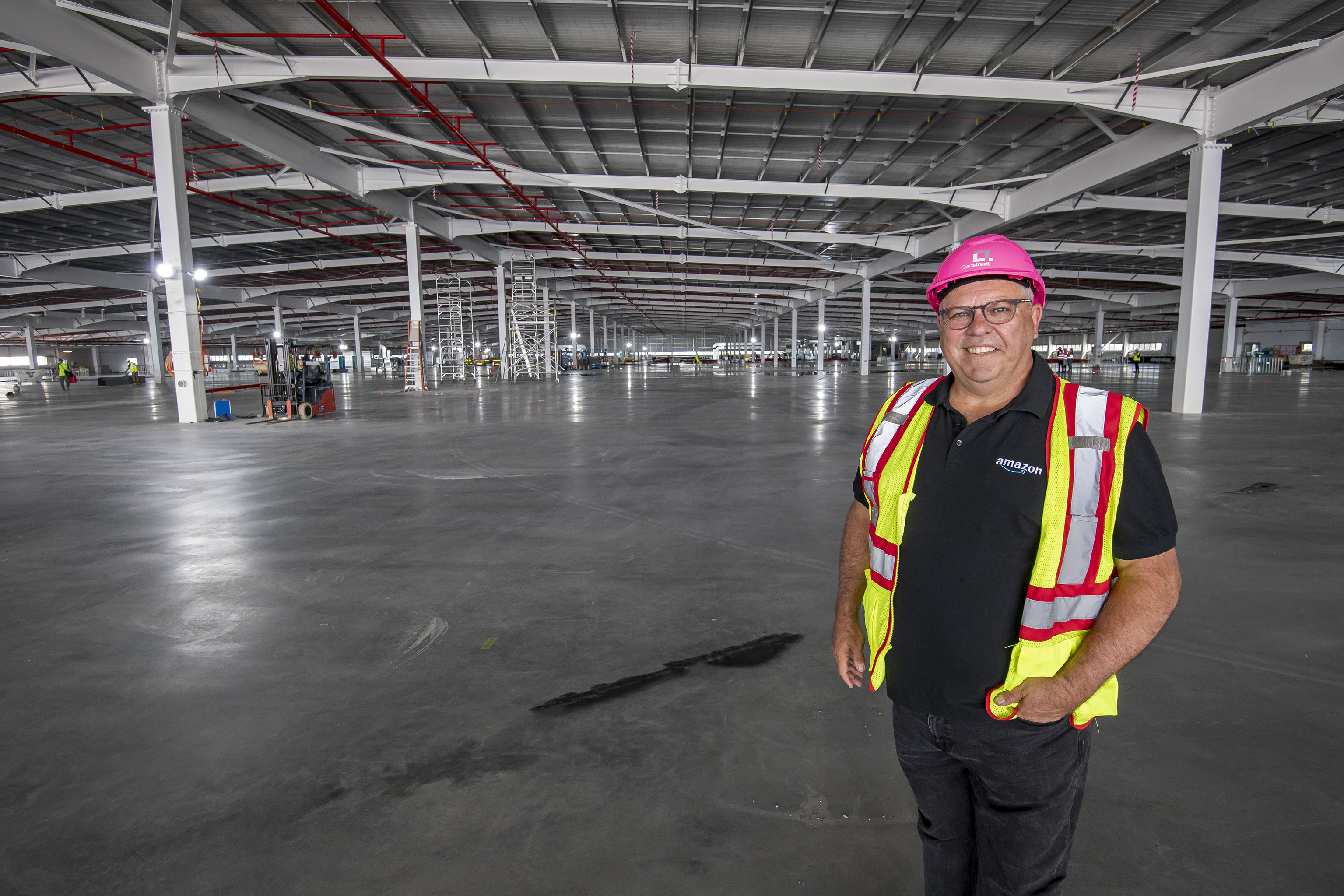 9News.com.au was given a sneak peek of the warehouse, which consists of several floors of finely polished concrete ready to store millions of products for sale.

Craig Fuller, Director of Operations at Amazon Australia, said once complete the centre could theoretically deliver products to 85 per cent of the population in 12 hours.

"This will be our fifth FC and will effectively double our operational footprint in Australia, providing our customers with wider selection and faster delivery when ordering via Amazon.com.au," Mr Fuller said.

"Utilising advanced technology, the robotics will enhance the efficiency of our operations as well as the safety of our associates, helping to support our Amazonians as they pick, pack and ship the millions of items housed within the fulfillment centre to customers around the country." 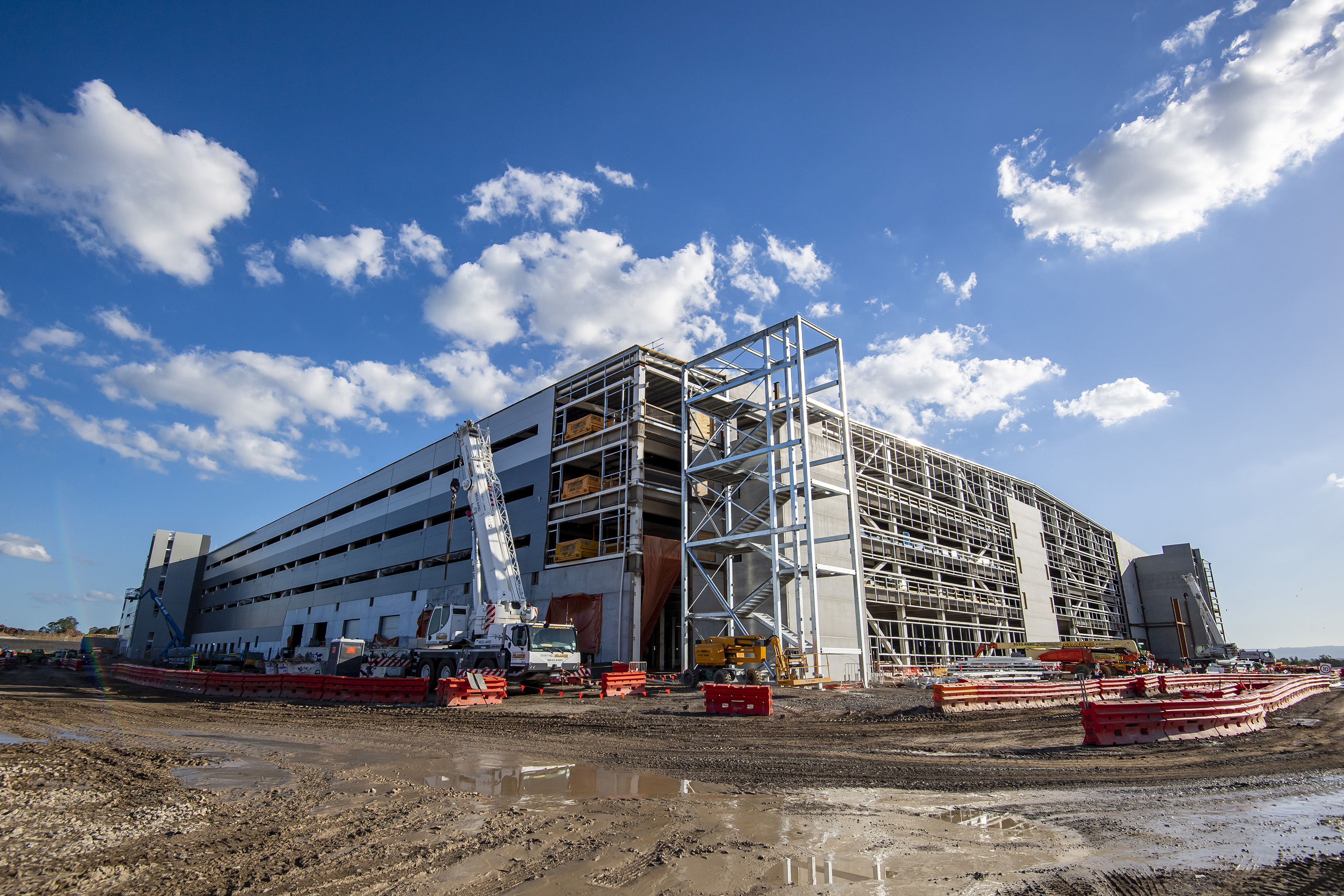 Once complete the warehouse will house "robots" that will sort and pick products after they are selected online.

Once the items are picked, they will be packed by humans before they are shipped out to the recipient.

Use of artificial intelligence means Amazon can store up to 50 per cent more items per square metre, which should translate into greater product selection and potentially faster shipping times for customers.

It's anticipated the warehouse will create more than 1,500 jobs to work alongside the robots, performing a broad range of tasks including engineering, packing, logistics and IT. 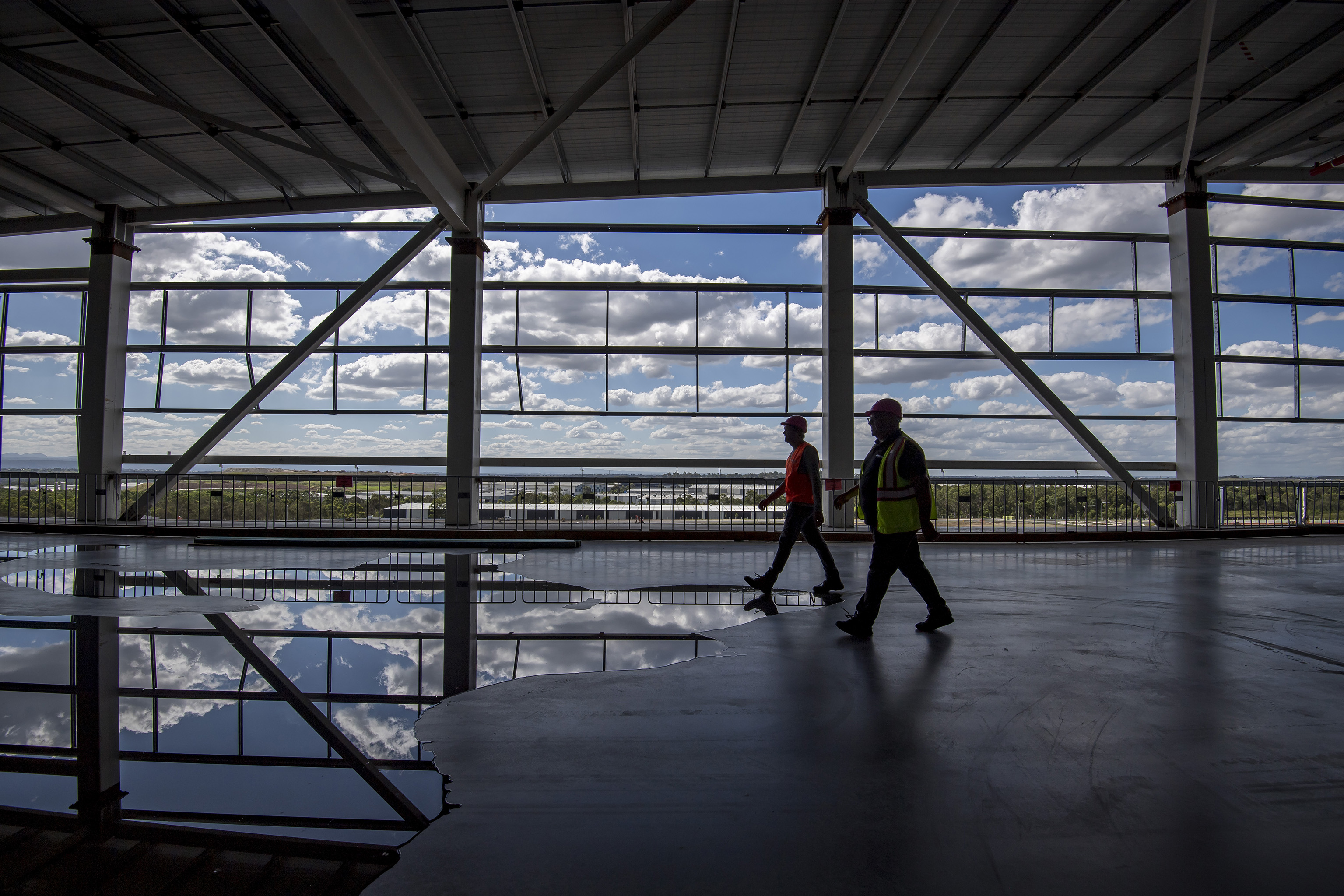 Building a home for robots presented an array of challenges for the builders.

The result is acres of finely polished concrete, so accurately graded that any hill or depression is imperceptible to the human eye.

The warehouse has been built by Goodman, who erected the building in less than 10 months – no mean feat considering the estimated 200,000 nuts and bolts used just to build the massive cavern's external steel frame. 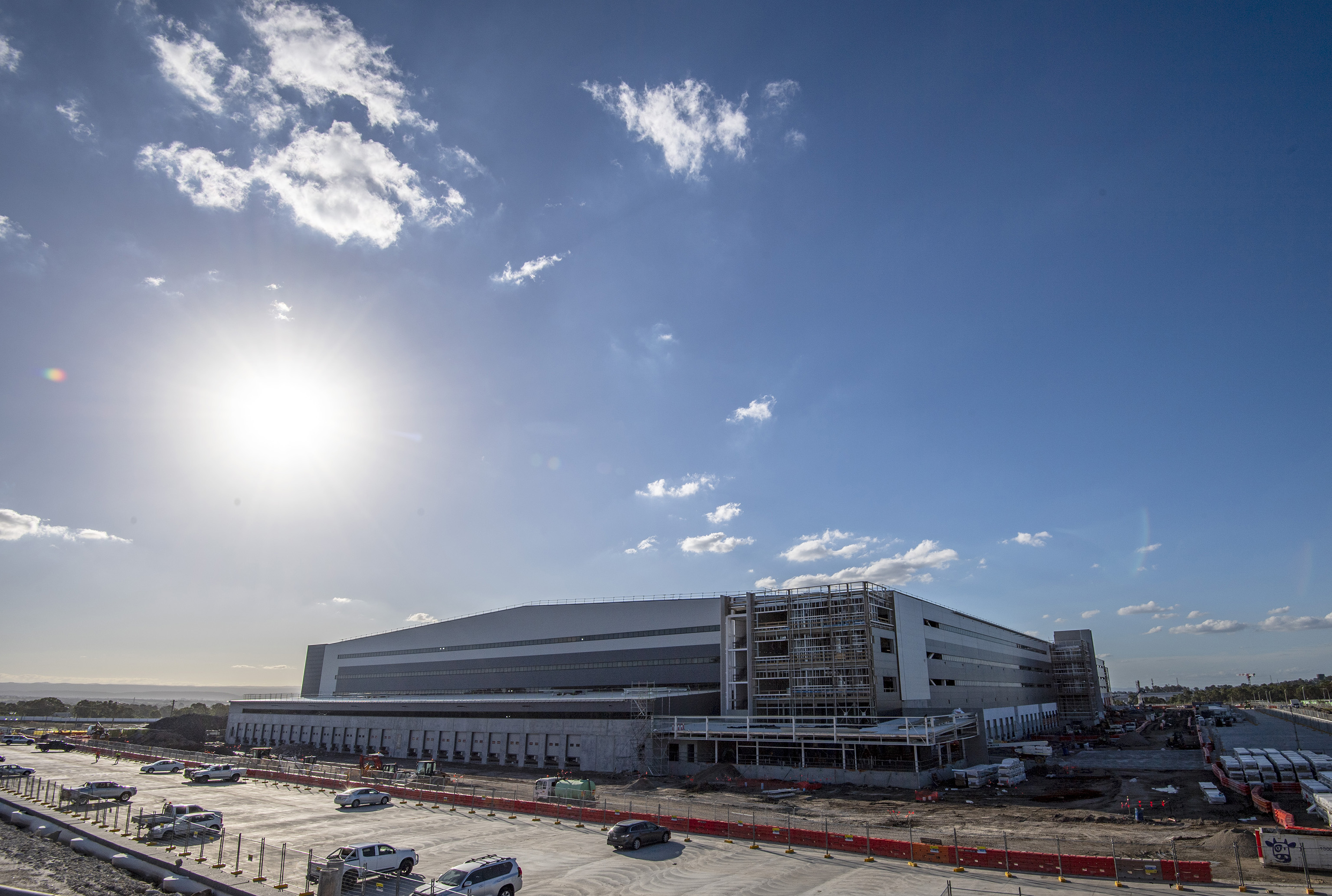 By the time it is complete, more than 1,700 Australians will have contributed to the largest warehouse in the country and Australia's first-ever robotic online shopping hub.

"Our $150 million investment in roads and infrastructure will create road capacity and better access to services, building on Outer-Western Sydney as a key area for logistics and transportation."