Netflix debuts a few new movies a week. Almost none of these films are truly worth watching.The streaming service has tried to brand its movies as “Netflix Films” ― creating a category that’s not quite a theatrical release (in most ca…

Netflix debuts a few new movies a week. Almost none of these films are truly worth watching.

The streaming service has tried to brand its movies as “Netflix Films” ― creating a category that’s not quite a theatrical release (in most cases) but also presumably better than a “TV movie.” But while the budgets for these Netflix movies often far exceed that for TV movies of old, the execution doesn’t. The result ― almost every Netflix Film “looks good,” but actually isn’t.

Of course, Netflix does get it right every so often. As such, I figured it was time to highlight a few of its movies from 2020 that deserve to shine amid the service’s tidal wave of content.

In the list below, you can find movies from such greats such as Spike Lee, Tina Fey and Charlie Kaufman, as well as quite a few documentaries. 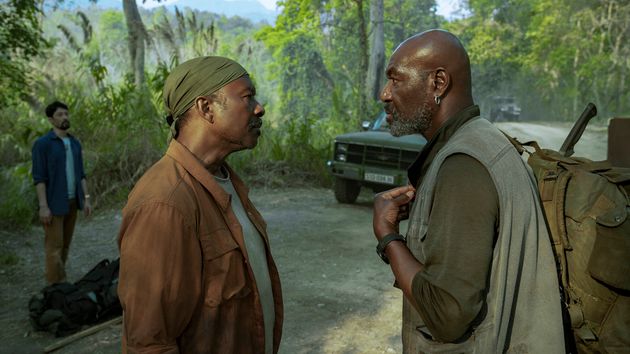 The list goes beyond my personal taste by curating from the aggregate review scores of Metacritic and Rotten Tomatoes, as well. I didn’t include any films that scored below a 75 on either website (that score is considered good on both platforms).

To keep things simple, I also excluded Young Adult and foreign language films, as those tend to get reviewed on an extreme curve. Arguably, documentaries also get this special review treatment (any decent documentary receives near-automatic widespread high praise). But I realised that if I didn’t include the docs, this list would be very sparse. Not great! As new “Netflix Films” have repeatedly topped the service’s popularity rankings, I certainly wonder if users are feeling more and more burned by these mediocre movies.

In any case, read on for the good Netflix movies from 2020.

And if you want to stay informed on everything joining Netflix on a weekly basis, subscribe to the Streamline newsletter.

Premise: This documentary tells the story of a 1970s summer camp in New York named Camp Jened. The camp brought young people with disabilities together to form a community that ultimately was instrumental in starting the disability rights movement.

Premise: This action drama directed and co-written by Spike Lee tells the story of Black Vietnam War veterans returning to that country to find gold bars they buried together, as well as the remains of their former leader. They encounter both resistance and open arms from the Vietnamese. The team must balance their guilt with the frustrations of their own victimhood for having fought for a racist U.S. society.

Premise: This documentary tells a cautionary tale about the popular social media networks. Former senior leaders at companies including Facebook and Twitter share horror stories of regret and warn of how these companies have hurt and may destroy the country. The documentary suggests radically changing our relationship to these barely regulated yet ubiquitous services.

Premise: This documentary interviews transgender celebrities (such as Sandra Caldwell, Jamie Clayton and Laverne Cox) who share their experiences in life and showbiz. Archival footage helps tell the larger story of transgender performers of the past. The balance between contemporary conversations and stories of the past helps show what progress has occurred and what still needs to come.

Premise: This psychological drama written and directed by Charlie Kaufman tells the story of a woman who almost breaks up with her new boyfriend but reluctantly agrees to take a trip to meet his parents at their remote farm instead. The woman’s anxieties about the relationship and life in general seem to manifest into the actions of the people she meets.

The movie is loosely based on a 2016 novel of the same name by Iain Reid.

Premise: This documentary features interviews with Paralympic athletes (such as Tatyana McFadden and Jonnie Peacock) and centers around how close the 2016 Paralympic Games in Rio de Janeiro came to being canceled. The movie depicts the day-to-day lives of the athletes as well as their near unbelievable training regimens. Prince Harry, who created the Invictus Games as an outlet for injured veterans to compete, also serves as a talking head in the movie ― a precursor to his eventual Netflix deal with wife, Meghan Markle.

Premise: This interactive comedy co-written by Robert Carlock and Tina Fey wraps up the “Unbreakable Kimmy Schmidt” series with a plot about Kimmy preparing for her wedding to a prince. Kimmy has to keep deciding whether she should keep preparing for her wedding or go confront the man who kidnapped her years ago as she learns he may have kidnapped more women. Like the 2018 Netflix film “Black Mirror: Bandersnatch,” the viewer can make these decisions for Kimmy and cause the movie’s plot to turn in different directions.

Rotten Tomatoes score: No score as the site counted it as an episode.

Premise: This documentary features the Indianapolis Star’s reporting into the sexual abuse scandal in the U. S. gymnastics program that led to the conviction of Dr. Larry Nassar. The reporting is aided by an anonymous source referred to as “Athlete A,” who eventually comes forward to reveal herself as gymnast Maggie Nichols. Nassar, who worked for roughly two decades for the national gymnastics team, faced abuse and assault accusations from over 250 women and underage. Convicted of multiple abuse charges in 2018, he will spend the rest of his life in prison.

Premise: This documentary features director Chris Bolan telling the story of his two great aunts, a secret couple for nearly seven decades. The women met in the 1940s and told their families that they were just friends and roommates, given the country’s treatment of gay couples at the time.

Ryan Murphy produced the movie, along with Blumhouse Productions.

Premise: This documentary tells the story of Walter Mercado, a Puerto Rican astrologer and general entertainer who died in 2019. He achieved fame from regular TV appearances spanning decades. His personal life and the character he played on screen became intertwined, making this dive into “who he was” particularly fascinating, while the story has constant theatrics that makes it inherently entertaining.